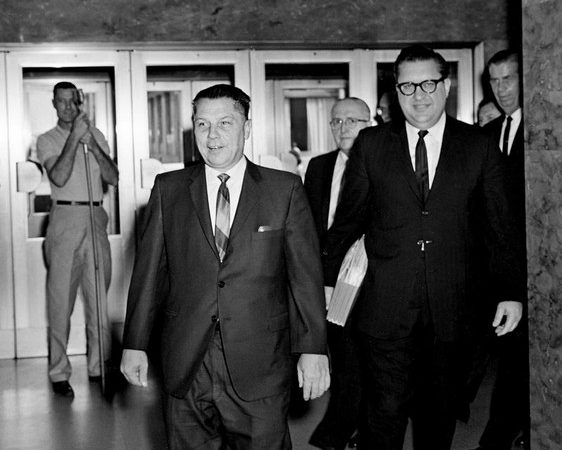 The upscale wedding of a famous mob lawyer’s daughter held in the days following Jimmy Hoffa’s disappearance will be depicted in the much-anticipated Martin Scorsese movie,The Irishman, about the relationship between the iconic labor union boss and an east coast mafia hit man.

The fiery 62-year old Hoffa was kidnapped and killed on July 30, 1975, vanishing from a suburban Detroit restaurant parking lot on his way to a meeting with a pair of mob captains to discuss his plans to retake the top spot in the Teamsters union. Just over 48 hours later, Hoffa’s longtime attorney Bill Bufalino, a one-time Teamsters power himself and a mouthpiece for numerous high-wattage American mafia figures in his day, married off his baby girl at his estate in Grosse Pointe Shores, Michigan in front of a cavalcade of mob royalty, including several of those suspected in Hoffa’s murder conspiracy. Hoffa’s remains have never been found and nobody has ever been arrested for his slaying.

The Bufalino wedding was intensely monitored by FBI surveillance units. Bufalino himself had been identified as a “made man” in Detroit’s Zerilli-Tocco crime family by informants to the FBI and Michigan State Police in the years before he became an attorney.

The Irishman is based on the 2003 best-selling book, I Heard You Paint Houses, penned by Charles Brandt chronicling the life of Delaware Teamsters leader and mob assassin Frank (The Irishman) Sheeran, who dubiously claimed on his deathbed he was the triggerman in the Hoffa hit – his confession is unsubstantiated and heavily doubted by historians and the FBI. Scorsese has cast Robert De Niro as Sheeran, Al Pacino as Hoffa and Ray Romano as Bufalino in the $100,000,000 project currently in production in New York and slated for a late 2018 limited-theatre run and 2019 streaming release.

While De Niro and Pacino are legends of the big screen, Romano is more known for his work on television, where he got an Emmy nod for his successful CBS sitcom Everybody Loves Raymond. The show ran for nine seasons and won more than a dozen Emmy Awards. Romano has gotten recent rave reviews for his supporting role in the movie The Big Sick.

Bill Bufalino died of cancer in 1992 living in retirement in Florida. He was cousins with Northeast Pennsylvania mob don Russell Bufalino, one of the prime suspects in ordering Hoffa’s execution. Sheeran was Russell Bufalino’s right-hand man and main enforcer. Both Bufalino and Sheeran were present at the August 1 wedding of Bill Bufalino’s daughter. So was Detroit mob street boss Anthony (Tony Jack) Giacalone and Genovese crime family capo Anthony (Tony Pro) Provenzano of New Jersey, the two men Hoffa was supposed to meet for lunch the day he vanished two days prior.

Hoffa had used his connections to the underworld to rise to the Teamsters presidency, but relinquished his post in 1971 when he was serving the final months of a five-year prison term for fraud and bribery. Despite warnings from his former benefactors in the mob to stand down and retire, Hoffa insisted on gunning for the goliath labor union’s presidency again, setting his sights on the 1976 election.

In addition to being Hoffa’s attorney and the lawyer for a slew of mobsters around the country, Bill Bufalino was the president of Teamsters Local 985 in Detroit from 1947 through 1967. Local 985 oversaw much of Southeast Michigan’s jukebox delivery and maintenance business, an industry in the Detroit area allegedly controlled by longtime Detroit mafia underboss Angelo (The Chairman) Meli, the uncle of Bufalino’s wife. Reportedly the man who gave Hoffa his start up the ladder of the Teamsters, Meli died of natural causes in 1969.

Bufalino’s son, Bill Jr,, followed his dad into the practice of law and was also the subject of FBI inquiries for his reputed ties to organized crime. According to FBI records, the younger Bufalino ferried mob luminaries from St. Louis and Tampa to his sister’s wedding in the summer of 1975, picking them up from Detroit Metropolitan Airport and driving them to his father’s home in ritzy Grosse Pointe Shores for the nuptials. One federal record from 1974 alleges Bufalino and Detroit mob soldier Danny (The Trigger) Triglia beat up a local gambler indebted to a Zerilli-Tocco crime family-backed Las Vegas casino.