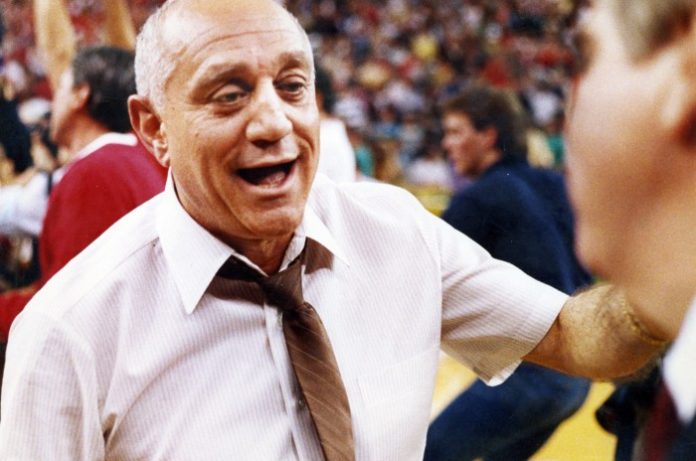 March 27, 2022 — The murder of Jerry Tarkanian’s agent was not related to Tarkanian’s desire to leave the UNLV Running Rebels for the head coaching job of the NBA’s Los Angeles Lakers drawing the ire of the mafia in Las Vegas, as implied by the new HBO series Winning Time, a behind-the-scenes romp chronicling the rise and fall of the 5-time world-champion “Showtime Lakers” of the 1980s. Instead, he was killed for gambling debts and skimming money from the mob.

On the verge of successfully brokering a deal for Tarkanian to jump from the NCAA to the NBA, his close friend and representative, Vic Weiss, was brutally in a slain gangland-style hit that was carried out in the summer of 1979 in the hours after he left a final contract negotiation with Lakers’ owner Jack Kent Cooke and soon-to-be owner Jerry Buss in Beverly Hills. Weiss’ trussed, decomposing body was discovered on June 17, 1979 in the trunk of his Rolls Royce in a North Hollywood parking garage. He had been shot twice in the back of head.

The Weiss homicide case remains open. The deal Weiss was hammering out on behalf of Tark the Shark with the Lakers would have made him the highest-paid coach in NBA history at that time.

In the wake of Weiss’ murder, Tarkanian decided against leaving for the pro ranks and stayed at UNLV for the next 11 years, leading the Rebels to three more Final Fours (1987, 1990, 1991), two more NCAA Championship Games (1990, 1991) and one National Title (1990). Finally getting his shot in the NBA, Tarkanian flamed out as head coach of the San Antonio Spurs after being forced out of UNLV by the NCAA and the school itself over infractions and connections to organized crime figures. His career on the bench ended by transforming Fresno State into a nationally-ranked program.

The wide-bodied 51-year old Weiss was longtime friends with Tarkanian, going back to their days in college. Gregarious and garish, he made his fortune in real estate and sports and concert promotion. Weiss had business interests in life and home insurance and owned a fleet of car dealerships. Tarkanian was the toast of the town in Vegas in the late 1970s, a citywide celebrity and growing cultural iconoclast equal to that of Frank Sinatra, Wayne Newton, Elvis Presley and Siegfried & Roy. The 1977 UNLV club was ranked No. 1 in the country and advanced to the school’s first-ever NCAA Final Four.

Weiss held a late-afternoon meeting with Kent Cooke and Buss at the Beverly Comstock Hotel bar on June 14, 1979. Kent Cooke was about to sell the Lakers to Buss. Per both Kent Cooke and Buss, Weiss left the contract talks for a dinner with his wife at around 5:15 p.m. with a fully-negotiated deal sketched out on a legal pad stashed in his Gucci leather briefcase. Weiss vanished on his way to Monty’s, a restaurant in San Fernando Valley.

Three days later, his body was discovered. North Hollywood Police were called to investigate an abandoned Rolls Royce with a foul odor emanating from its trunk in a parking structured adjoining a Sheraton Hotel. Weiss was found in the trunk with his hands and feet tied behind his back and two bullets lodged in his brain. The murderers left behind all of his jewelry (diamond pinky ring, a solid-gold Rolex watch given to him as a present from a music-industry starlet) and the money in his pocket ($38,000). The contract, on the other hand, was gone. As was the briefcase.

Investigators were able to trace Weiss’ route from the Beverly Comstock to Encino in the San Fernando Valley, where witnesses saw him pull his car over on the side of the road and engage in a shouting match with three men in a Cadillac. The men in the Cadillac (one described as 6-foot-5, with sandy blonde hair) eventually got into Weiss’ Rolls Royce with Weiss at the wheel and were seen pulling out back into traffic and heading north on the Hollywood Expressway.

Weiss was never seen alive again. Police speculate he was done away with shortly thereafter, possibly within minutes.

Weiss, a high-stakes gambler, was reportedly in debt to Spilotro and was suspected of pocketing “skim” money when he carried out couriering and launder duties for Spilotro’s crew. Two informants claimed Weiss shuffled cash from Vegas to Los Angeles, where he handed off to Spilotro’s lieutenants in Southern California to clear his gambling losses. FBI agents snapped photos of Weiss meeting with Joey Hansen, Tony the Ant’s main man in L.A.

In 1975, Weiss got an endorsement deal for Tarkanian with Royal Reservations, a mob-controlled casino-and-hotel junket business ran by Dave Bliss, a buddy of Spilotro’s nailed for bribing public officials. Bliss went on to testify against the Spilotro crew in court and dodged a murder contract. California Stat

Howie Steindler, an associate of Weiss’ and Sica’s in the west coast boxing world, was found murdered in 1977, killed in the same fashion Weiss would be two years later. Sica was a suspect in the Steindler hit.

At least four suspects in the Weiss murder were murdered themselves in the decade that followed; none connected to the case though:

*Tony the Ant, himself.

All four interacted with Weiss and are thought to have been doing business with him in some form or another in the years leading up to his death. Weiss’ name came up in money-laundering investigations involving a number of treacherous characters like Rockman, Launius and McKenna.

Rockman was killed on April 1980 after testifying against a number of mob figures tied to crime families in California and Detroit in court.

Launius and three others were heinously bludgeoned to death in the grisly Wonderland Apartment Massacre in July 1981 on orders of L.A. crime boss Eddie Nash for their armed robbery of his mansion days earlier. The gory triple homicide was depicted in the 2003 movie Wonderland, co-starring Josh Lucas as Launius and Eric Bogosian as Nash.

McKenna was killed by machine gun fire in March 1989 as a result of a falling out with his business partner in a chain of strip clubs. Him and Joey Hansen are thought by some to have been two of the three individuals Weiss was seen leaving in his Rolls Royce with. Hansen was a triggerman with and for Tony Spilotro in multiple gangland slayings, per FBI documents.

Spilotro and his younger brother Mickey were beaten, stomped and strangled to death in June 1986 in a Chicago area basement because of Spilotro’s rogue behavior in Vegas. The entire Spilotro saga was the subject of the 1995 movie Casino, with Joe Pesci earning praise for his portrayal of the Ant.

Tarkanian passed away of natural causes in 2015. Inducted into the Basketball Hall of Fame in 2013, Tark the Shark closed his career with over 700 total wins and a legacy of revolutionizing the college hoops landscape with his wide-open, fast-paced style of play and groundbreaking “ameba defense.”