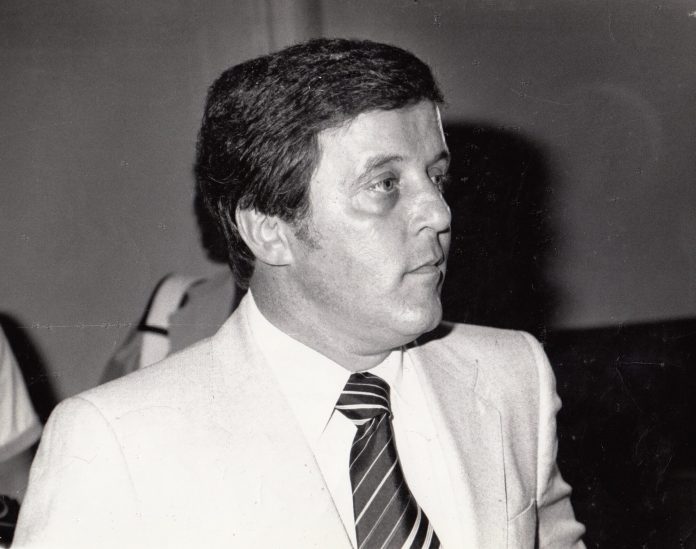 June 22, 2022 — The FBI thinks that the old Tony (The Ant) Spilotro crew in Las Vegas killed Los Angeles mob associate John (Johnny D) DuBeck and his wife Franny as a favor to the L.A. mafia, according to three people with intimate knowledge of the double-homicide at both the local and federal level. The pair were shotgunned to death in the courtyard of their Vegas apartment complex in the early-morning hours of March 19, 1974.

Spilotro was the Chicago mob’s crew boss on the Vegas Strip between 1971 and 1986. Authorities suspect his involvement in more than two dozen homicides committed on the West Coast during his reign of mob terror on the Strip. In exchange for the help in taking care of their “Johnny D problem,” Spilotro and the Chicago Outfit were cut in on a string of gambling and fencing operations. Spilotro had multiple liaisons and lieutenants of his living and working in Southern California.

The 31-year old DuBeck was scheduled to be the star witness against L.A. mafia figures Peter (Shakes) Milano, Luigi (Little Louie) Gelfuso and John (Johnny V) Vaccaro at a federal gambling trial the following week. Johnny D and his 27-year old wife worked at the Westward Ho-Cotel & Casino on the Vegas Strip in Winchester, rejecting requests by the government that they enter the Witness Protection Program prior to DuBeck taking the stand.

Milano and Gelfuso were captains in the Dragna crime family at the time. Gelfuso was street boss for L.A. mob don Nick Licata, having come up through the ranks of the local organized crime syndicate working for Licata in his bar and acting as a driver and bodyguard. Milano went on to become boss of the family in the coming years. Licata succumbed to a prolonged battle with heart problems at age 77 in the fall of 1974.

Spilotro and his younger brother Mike, were beaten, stomped and strangled to death in a gruesome June 1986 mob hit carried out as vengeance for Tony the Ant’s increasingly-bothersome insubordination and high-profile in the news headlines blamed for a slew of federal indictments for him and his mafia superiors in the Midwest. The entire Spilotro saga was tackled on the big screen by Hollywood director Martin Scorsese in the 1995 movie Casino, starring Joe Pesci as a character based on the Ant’s and chronicling his bloody stampede through the desert.

“Johnny D” DuBeck and “Johnny V” Vaccaro were a well-known tandem in L.A. mafia circles. They met in Las Vegas in the late 1960s and worked as “boots on the ground” in Nevada for the Licata regime. According to LAPD informant files, DuBeck was an expert at rigging slot machines and Licata often loaned him and Vaccaro out to Chicago Outfit representatives in the Vegas hotel and gaming industry for casino-fixing purposes.

In late 1972, DuBeck and Vaccaro came back to L.A. and opened a restaurant and after-hours gambling joint on the Sunset Strip in West Hollywood and bookmaking and juice-loan rackers in Van Nuys, per FBI records. With help from Gelfuso and Milano, they set up a floating backdoor casino centered out of San Bernardino where they began ripping off players with rigged card and dice games across the San Fernando Valley. The games were raking in $250,000 a month in profits, according to the indictment.

After DuBeck’s slaying, the charges against Vaccaro, Gelfuso and Milano still stuck. Milano was also under indictment for heroin trafficking out of Hawaii. The star witness in the Hawaii “H” case survived a car-bombing attack in the hotel parking garage of a Honolulu Hilton two weeks before DuBeck and his wife were murdered. Another co-conspirator in the drug-trafficking conspiracy was Jackson (Junket Jack) Inada, a Japanese Yakuza-affiliated underworld figure, killed along with his girlfriend two years later in the days before his trial in the narcotics case was scheduled to kick off in a Honolulu federal court.

Beating a mid-1980s federal bookmaking and extortion bust, Milano went to prison for a 1988 federal racketeering conviction and was released in 1991. Per FBI records, Milano became boss of the L.A. mafia in 1980s. He died of natural causes in 2012 at age 86.

“Johnny V” Vaccaro passed away due to heart issues at 75 in gangster retirement in 2015, owner of a lengthy rap sheet and reputation as a true jack-of-all-trades in the West Coast Italian mob. Gelfuso, 76, died of cancer in 2000. Vaccaro, Gelfuso and Milano all died publicly named as suspects in the DuBecks’ execution.

Most of the L.A. mafia was made up of hoodlum expats who relocated to the West Coast from the East Coast and Midwest. Licata came to L.A. from Detroit. Gelfuso was born and raised in Providence. Milano’s dad was consigliere of his hometown Cleveland mafia. Vaccaro cut his teeth in New Orleans for the Big Easy’s Marcello crime family.