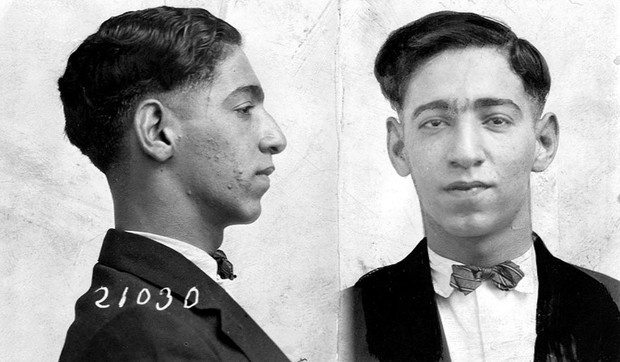 Festering animosities in St. Louis Syrian mafia boiled over in the early 1980s resulting in a bombing and shooting war that lasted almost two years and crushed the city’s Middle-Eastern mob contingent made up of Syrian and Lebanese gangsters which dated back decades. Crafting a formidable reputation for himself during Prohibition as a leader of the notorious Cuckoo Gang, James (Horseshoe Jimmy) Michaels ruled as St. Louis’ undisputed Syrian Godfather for more than 30 years and was backed by the city’s Italian mafia – Horseshoe Jimmy can be seen in this article’s featured image in a Prohibition era mug shot. When mafia don Anthony (Tony G) Giordano died from a bout with cancer in the late summer of 1980, Michaels’ enemies, specifically the half-Syrian, half-Lebanese Leisure family, led by aspiring boss Paul Leisure, his brother Anthony and his first cousin David, who were former bodyguards of Horseshoe Jimmy’s and blamed him for allowing the murder of Richard Leisure, Paul and Anthony’s oldest sibling, years earlier to go unpunished, used it as the green light to challenge him for control of a criminal organization focused around gambling and labor-union racketeering.

Even before Giordano’s passing, bodies had begun dropping. Within three weeks of Tony G being put into the ground, Michaels was slain and all hell broke loose in the St. Louis underworld

November 8, 1979 – St. Louis Italian mobster John (Sonny) Spica is killed in a car bombing in his driveway. Spica had been placed into a position in Local 42 of the LIUNA as Tony Giordano’s eyes and ears months earlier.

August 11, 1981 – New Syrian mob boss and Michaels’ successor Paul Leisure has parts of both his legs blown off in a car bombing. “Jimmy Beans” Michaels is eventually convicted in the attempted murder and is smacked with a five-year prison sentence.

September 11, 1981 – Syrian mob figures Johnny Michaels, Jimmy Beans’ brother and Dennis Day, are each shot by Anthony Leisure as they leave a lunch meeting at the Edge Restaurant in St. Louis, but survive the attack.

October 16, 1981 – St. Louis Syrian mob figure George (Sonny) Faheen, Horseshoe Jimmy’s nephew, is blown up in a car bomb planted in his Volkswagen while parked in the garage of his Mansion House apartment complex.

October 18, 1981 – Leisure faction lieutenant Mike Kornhardt is arrested for Faheen’s murder, matching an eye-witness’ description of a man leaving the scene of the crime.

June 5, 1982 – St. Louis mafia boss John (Johnny V) Vitale, described as one of the last of “the gentlemen gangsters,” dies of a heart attack. Vitale was Tony G’s underboss, successor and an FBI informant at end of his life when he sat on the throne, helping the feds lay the ground to bust the Leisure family.

July 31, 1982 – St. Louis Syrian mob enforcer Mike Kornhardt is killed on a farm in St. Charles, Missouri by Lesiure henchmen Bobby Carbaugh and Steve Wougaman. Kornhardt is lured to the piece of rural property under the pretense of a burglary and instead has his head blown off by a shotgun blast.

August 4, 1982 – St. Louis Syrian mob enforcer David (Bozo) Leisure is arrested for Sonny Faheen’s murder. Three years later, he is indicted for planting the bomb that killed Horseshoe Jimmy Michaels in 1980 and sentenced to die by lethal injection. In the fall of 1999, Leisure becomes the first organized crime member to be put to death via capital punishment since the 1940s

April 13, 1983 – The Leisures and several associates are indicted on federal racketeering and murder charges. Paul and Anthony were both convicted and received 55-year prison terms. Anthony Leisure, 70, was released from behind bars in 2007, less than a decade removed from his brother Paul dying of cancer in a Springfield, Missouri prison hospital.