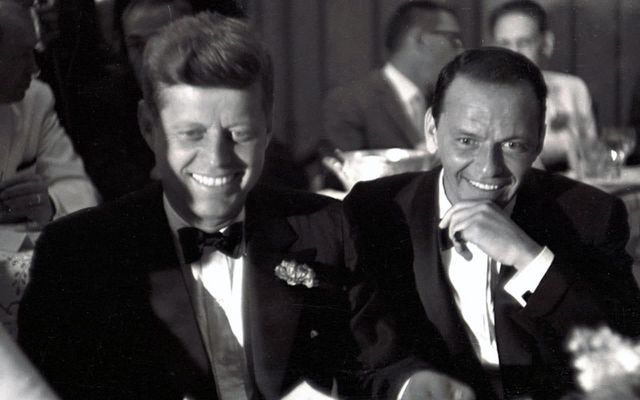 December 2, 2021 — U.S. President John F. Kennedy broke off his relationship with iconic entertainer Frank Sinatra and the Rat Pack after Kennedy came under heat from his own Justice Department for allowing Sinatra to throw him an inauguration party at a mobbed up gambling den, per FBI records.

On the late evening of January 20, 1961, hours after Kennedy was sworn in as the 35th President of the United States, he was drinking, gambling and carousing the night away at the Spartan American Club with Sinatra’s Rat Pack and other big-name celebrities, not to mention a convoy of Mafiosi from New York and Chicago, at a party held in his honor. The Spartan American club was owned by Washington D.C. mob boss Joe (The Possum) Nesline, who ran the rackets in the nation’s capital for New York’s Genovese crime family from the 1950s through the 1980s.

Kennedy had leveraged his family’s corporate and political dynasty and support from Hollywood and the Mafia into a successful run to the White House. Sinatra served as Kennedy’s conduit to both the entertainment world and the underworld. The Rat Pack played a pivotal role in JFK’s win in the rail thin 1960 election, barnstorming the country stumping for him and helping him raise money. The JFK campaign used Sinatra’s “High Hopes” song as its theme music.

In the days that followed Kennedy’s inauguration, FBI Director J. Edgar Hoover presented the President FBI surveillance photos of the Rat Pack’s Spartan American Club party at a meeting in the Oval Office and his advisors instructed him to immediately cut ties with Ole’ Blue Eyes. Kennedy subsequently canceled a planned vacation to Sinatra’s residence in Palm Springs, California and angered the singer by staying at rival entertainer Bing Crosby’s estate instead. The snub severed Sinatra and Kennedy’s friendship and propeller Sinatra to defecting to the Republican Party in the ensuing y

Nesline was Irish and a native of D.C. Per his D.C. police jacket, he politicked his way up the criminal food chain via his close relationships with Jewish mob power Meyer Lansky and Genovese crime family capo Charlie (The Blade) Tourine, the borgata’s skipper in Miami. Because he wasn’t Italian, he could never be made into the mafia, however, his business acumen and legendary reputation for running the most profitable dice game on the East Coast allowed him to rise to crew boss status and become D.C.’s only true-crime mob chief. According to his FBI file, Nesline maintained a wide network of gangland connections and extensive gambling interests in Cuba and the Bahamas, eventually planting a flag in Europe and the Middle East (with some of the ventures being co-financed by Lansky and Tourine).

A jury acquitted Nesline of murdering D.C. bookmaker George Hardy in 1951 at the Hide-Away Club on the grounds of self-defense. Hardy had a 38-caliber gun in his jacket pocket when Nesline shot him dead in a hallway of the club.

The heat incurred by Nesline’s Spartan American Club over Kennedy’s inauguration party resulted in him shuttering the club all together and moving his headquarters to the Amber Club, hiring actor George Raft as the club’s greeter. Nesline teamed with Chicago mob associate and nationally-respected gambling whiz Frank (Lefty) Rosenthal in operating the Amber Club until they were indicted for illegal gambling and Rosenthal fled for Las Vegas. Rosenthal’s life in Vegas was chronicled in the film Casino with Robert DeNiro playing him as a character called “Ace Rothstein.”

Nesline took federal pinches in 1963, 1967 and then finally in 1986, all gambling related, but did little prison time. His 1986 bust for selling and operating video poker machines got him probation. He died of natural causes at age 82 living in a Delaware nursing home.

Kennedy was assassinated on November 22, 1963 riding in a motorcade during a parade in Dallas. Lansky and Tourine both died peacefully in Florida in 1980 and 1983, respectively,