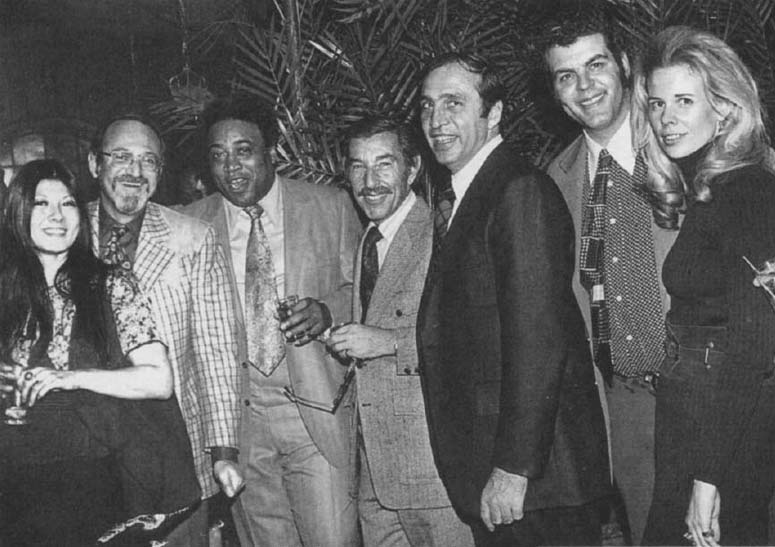 According to FBI and Florida State Police records, notorious New York mafia associate and music-industry mogul Morris Levy sanctioned the murder of his bodyguard, protégé and business partner Nathan (Big Nat) McCalla in 1980, part of the blood-stained fallout from an R&B concert years earlier where Levy and his mob cohorts lost hundreds of thousands of dollars. McCalla was found brutally slain in a Fort Lauderdale, Florida home on February 20, 1980, the back of his head literally blown off (Levy and McCalla can be seen in this article’s featured image – McCalla is third from left, Levy third from right).

Hiding out in the Sunshine State for over two years, the imposing and muscular McCalla was attempting to avoid the same fate as a popular Washington, D.C. disc jockey and a pair of underworld figures who were killed in 1977 in the aftermath of the concert. Per one state police document, McCalla, less than a month shy of his 50th birthday, was a “prime” suspect in the prior three homicides. That same document claims Levy helped relay the orders for the trio of gangland executions from members of New York City’s Genovese crime family and then signed off on the Genovese syndicate’s decision to silence McCalla for fear he would go to the Feds.

“Mo” Levy’s name has arisen back in the public consciousness recently due to the new HBO television show Vinyl, in which he has a character crafted in his mold. Vinyl is centered-around the music industry in the early-to-mid 1970s in New York, Levy’s heyday. The show’s main character, Richie Finestra, the owner and president of fictional American Century Records, is played by actor Bobby Cannavale. Finestra’s mentor in the music business is a character named Maury Gold, a mobbed up record man based on Levy, who died in 1990 weeks away from reporting to serve a 12-year federal prison sentence for racketeering and extortion.

Levy, a staple of the recording industry for three decades and the owner of influential Roulette Records, a chain of music stores and a number of nightclubs and performance venues around New York City, was close to Genovese organization brass like legendary Godfather Vincent (The Chin) Gigante and capo Dominick (Baldy Dom) Canterino. Gigante passed away of natural causes behind bars in 2005. Canterino, Levy’s co-defendant in his RICO case, died in prison too.

Big Nat McCalla was Levy’s right-hand man and vice president of Roulette Records, as well as the owner of a tiny R&B music label backed by Levy named Calla Records, responsible for the 1965 Top 20 hit “Let Me Down Easy” sung by Betty LaVette and JAMF Publishing (JAMF stood for ‘Jive Ass Mother Fucker’). Throughout his career, Levy became infamous for a wide publishing-rights portfolio, drawing controversy for rechanneling millions of dollars-worth of residuals into his pockets instead of his artists.

McCalla was black and often acted as a go-between for Levy and his African-American associates, pushing spins on the radio at black stations across the country, allegedly with the use of intimidation tactics. Like Levy, McCalla was a military vet (he served as a paratrooper in the Korean War). Some music historians point to McCalla for helping bring iconic reggae singer Bob Marley to mass North American audiences – he made deals to license Marley’s music in the 1970s, delivering a signing bonus and then failing to pay the rest of the agreed amount.

Calla Records shut down in 1977, the same year McCalla’s troubles began. Two years earlier, he and Levy were indicted for attacking an off-duty police officer outside a Manhattan jazz club. The assault occurred when NYPD cop Charlie Heinz made what Levy interpreted as an inappropriate comment to his girlfriend. Per an NYPD incident report, McCalla held Heinz on the ground while Levy pummeled his face causing Heinz to lose his right eye.

The charges in the case were dismissed prior to trial. Levy had long bragged of killing the man that killed his brother in a 1958 brawl at Levy’s Birdland Jazz Club.

In the spring of 1977, Levy, McCalla and their muscle in the mob’s Genovese clan began planning an Independence Day concert to be staged at the Take It Easy Ranch located in the Eastern Shores region of Maryland, per a state police file pertaining to payola in the radio market. They partnered with well-known Washington D.C. disc jockey Bob (Nighthawk) Terry to plan and host the event, according to FBI records.

Nighthawk Terry was the premier D.C. radio personality at the time, overseeing WOL’s transition from traditional rock-and-roll to all-R&B and soul music in the mid-1960s. Federal documentation from 1975 tied him to a series of payola scandals, the drug world and local east coast African-American hoodlums, Howard McNair and Teddy Brown.

McNair and Brown were “let loose” by Terry, per one police report surrounding the concert, to counterfeit gigantic amounts of tickets and stage passes and flood the black market with them in the weeks preceding the concert. This set of circumstances, according to FBI documents related to Levy’s affairs, enraged Levy, McCalla and their mafia benefactors in New York and McCalla, the contingent’s alleged liaison to the event and on-site supervisor, was tasked with dealing with it.

On July 2, 1977, two days before the slate of music acts were scheduled to begin performing, McNair and Brown were both found slain in a patch of woods just a few hundred yards from the Take It Easy Ranch property – McNair and Brown were shot at point-blank range. The day following the July 4 concert, informants told the FBI, tensions boiled over between Big Nat McCalla and Nighthawk Terry regarding a major loss of profits.

A screaming match ensued at Terry’s radio station, per multiple FBI informants, with McCalla threatening Terry and accusing him of skimming and counterfeiting more than 150,000 tickets. Terry claimed there were only 100,000 people who attended the concert, McCalla insisted it was closer to 200,000, resulting in a loss of at least nearly $1,000,000, possibly more .

The 41-year old Terry vanished on August 31, 1977, last seen driving away from the radio station in Washington D.C. (WHUR) he had recently departed to focus solely on his promotional efforts in his blue-colored Oldsmobile Toronado. His body has never been found. An associate of Nighthawk Terry’s, fellow D.C. disc jockey Seavy (Soul Papa) Campbell, someone who used to promote concerts with him, was found shot to death a year earlier after his promotions firm came under scrutiny from federal law enforcement.

Another one-time Terry business partner, Linwood Gray, reputed to be D.C.s most influential heroin dealer during the late 1970s and involved in the July 4 concert-gone-bad as a co-promoter, was indicted in a narcotics and tax evasion case in subsequent years and did two decades in prison on the tax charge. Gray admitted under oath at his July 1979 trial that he and Terry were connected to New York organized crime figures and blamed the drug activity he was being charged with on Terry, who couldn’t refute the claims because he was dead.

Terry was portrayed by actor-comedian Cedric the Entertainer in the 2007 film Talk To Me. One police informant told authorities that Terry’s body was dismembered and buried in several different spots across North Carolina farm country. Terry’s Oldsmobile was found torched in a North Carolina field in 1978.

Considered the No. 1 suspect in the McNair and Brown homicides and Terry’s disappearance, Big Nat McCalla left New York and went into hiding in Florida. He was discovered dead in a rented Ft. Lauderdale residence, sitting in a lounge chair in front of his television, his body badly decomposed on February 20, 1980. Investigators speculate McCalla had been deceased for at least a week and was clipped by someone he knew (the home’s back door was open, a set of keys in the handle, the windows sealed shut, the heater blasting).