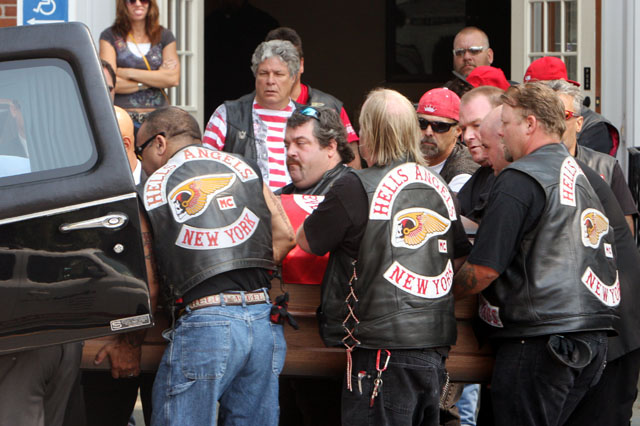 Orville (The Anvil) Cochran, the Chicago Outlaws Motorcycle Club president in the late 1990s and early 2000s just apprehended after 16 years as a fugitive, was directly involved in the stabbing death of an east coast Hells Angels leader at the infamous 1994 Lancaster National Speedway biker brawl in New York, according to his 2001 racketeering indictment. Cochran, 67, was brought into custody earlier this week after an arrest for shoplifting in Evergreen Park.

When the dust finally settled at the Lancaster National Speedway – located in Lancaster, New York, near Buffalo –, almost two and a half decades ago, two combatants were dead: Hells Angels Rochester chapter president Michael (Mad Mike) Quale and Outlaws Western New York chapter president Walter (Buffalo Wally) Posnjak, both 44. Quale had been stabbed over a dozen times. Posnjak died from a gunshot wound to his chest.

Tensions in the feud began to crest in the early 1990s. In 1993, a Hells Angel was badly beaten by a group of Outlaws in Wisconsin which set the stage for over a year of intense acrimony climaxing in the fall 1994 Lancaster Speedway slayings and a string of subsequent car bombings in Illinois. Months following the Wisconsin assault, legendary Outlaws International President Harry (Taco) Bowman addressed hundreds of his men inside a Florida hotel suite on New Year’s Eve, demanding an increase in hostilities towards the Hells Angels around the globe and placing an alleged $100,000 bounty on the head of Hells Angels Godfather Ralph (Sonny) Barger.

Prior to the 1990s, the Hells Angels only presence in the Midwest was in Ohio and Wisconsin. The club’s decision to “patch over” Illinois’ Hell’s Henchmen MC to Hells Angels status in the wake of Bowman’s New Year’s pronouncement only heightened the stakes.

On June 28, 1994, Hell’s Henchmen Rockford, Illinois chapter president LaMont (Merciless Monte) Mathias, the point man in the biker club merger, was beaten and shot to death inside his MC Cycles bike shop. Rockford is located in between Chicago and Milwaukee. In response to the Mathias hit, the Hells Angels bombed the tattoo parlor of Milwaukee Outlaws member Peter (Debris) Gross and tossed a hand grenade into the home of Buffalo Wally Posnjak in New York. Posnjak, a Russian immigrant raised in Ohio, and Taco Bowman, who led his Outlaws empire from his hometown of Detroit, were close friends and Bowman leaned on him to be his mouthpiece on the east coast.

The weekend beginning September 23, 1994 saw dozens of both Outlaws and Hells Angels descent on Lancaster, New York for the festivities at the Lancaster National Speedway featuring the All-Harley Drag Racing Association championship flights. Outlaws’ from as far as Michigan, Indiana, Illinois, Ohio and Wisconsin came to the Buffalo area for the races.

The bad blood began spilling over on the evening of September 24 with a dustup between respective club lieutenants at a local bar. The unrelenting ill will boiled over into a full-blown riot the next morning at the race track. The Outlaws arrived in the speedway parking lot a

t around 8:30 a.m. on September 25, 1994 and started partying. At approximately 9:00 a.m., the Hells Angels made their entrance and the two clubs began filling into the infield pit in anticipation of the first race at 10:00 a.m.

The starting flag never dropped. Before the Harleys roared their engines that day, fists were thrown, shots rang out and pedestrians, including women and children, were ducking for cover.

Per witness accounts, at roughly 9:30 a.m., Buffalo Wally Posnjak and his Outlaws crew got into a verbal spat with Hells Angels Rochester chapter luminary Robert (Big Bob) Herold and his men that erupted into violence and ignited the entire racecourse rumble. Soon, Mad Mie Quale, Herold’s best friend, was killed when two Outlaws repeatedly plunged their buck knives into his neck, heart, stomach and lungs and Posnjak was shot in the chest from 10-feet away, as almost a hundred bikers around them brawled with weapons and their hands for nearly an hour. Lancaster National Speedway officials immediately closed the track and cancelled the day’s race activities.

Besides the murders of Quale and Posnjak, eight others were hospitalized with serious injuries, 15 people were arrested and six eventually faced criminal prosecutions for their roles in the violence. Police confiscated an artillery of guns, baseball bats, brass knuckles, ax handles and knives from the sod and gravel battlefield in the aftermath of the clash.

Big Bob Herold was put on trial in New York for shooting and killing Buffalo Wally Posnjak, but acquitted at a spring 1996 trial, despite the murder weapon (a 44-cailber pistol) being discovered on his bedroom dresser in a raid. Mad Mike Quale succeeded Herold as president of the Hells Angels in Rochester and Herold physically carried Quale 100 yards from the speedway infield to a car to drive him to a nearby hospital where he was pronounced dead. Informants told the FBI that Southside Chicago Outlaw Orville Cochran and Indiana Outlaw Donald (Big Don) Fogg were the ones that dealt the fatal blows to Quale in the melee.

Fogg was in a vehicle stopped by New York State Police highway patrolmen some 50 miles away from the speedway that afternoon of the fight in which Quale’s bloodied Hells Angels’ vest was found. Less than six months later, Big Don Fogg was killed himself on orders of Taco Bowman in a “housecleaning measure,” after Fogg was heard boasting of his role in Quale’s stabbing.

Cochran is currently incarcerated in Chicago awaiting extradition to Milwaukee where he was originally indicted for murder, racketeering and narcotics trafficking in June 2001. Bowman, 67, is serving life in prison today.

In addition to the Quale slaying, Cochran is also charged with the March 1995 homicide of Northwest Chicago Hells Angel Jack (4-by-4) Castle, a former Hell’s Henchmen helping head the club’s transition in becoming part of the Hells Angels family. The Castle hit capped a half-year of turbulence on the heels of the altercation at the racetrack, following three bombing attacks on the Illinois Hell’s Henchmen in the final months preceding the club patching over to Hells Angels.

Bowman stripped an Outlaws affiliate club called the Fifth Chapter of its affiliate rights when he saw a newspaper photo of Fifth Chapter members attending Mad Mike Quale’s funeral. James (Big Frank) Wheeler, Bowman’s successor as international president of the Outlaws, was convicted in 2003 out of Tampa of being one of the coordinators of the speedway violence as part of his racketeering case.