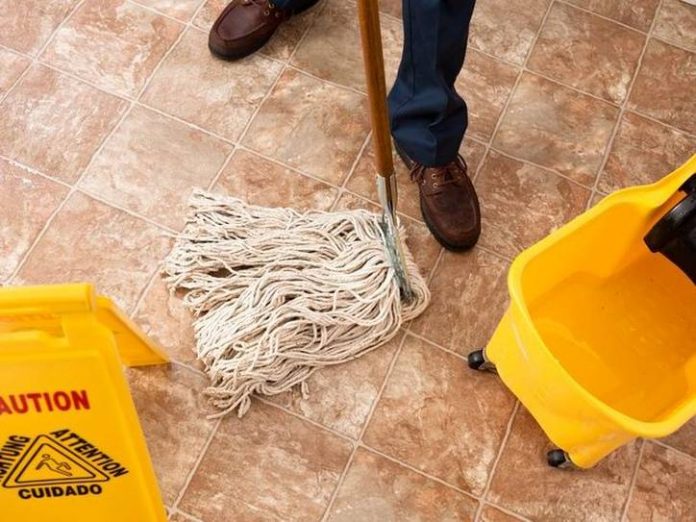 October 21, 2021 — Chicago Jewish mob associate Ben (King of the Custodians) Stein died 25 years ago this fall. But his behemoth janitorial business, United Maintenance Services, remains in the headlines all these years later.

Earlier this month, Stein’s protege and successor as owner of United Maintenance, Rick Simon, filed a lawsuit against Chicago City Hall for unjustly cancelling a decade-long $200,000,000 contract for the daily cleaning and sanitizing of the sprawling, always-bustling O’Hare International Airport in Rosemont, Illinois. Simon is a former Chicago police officer and is as politically juiced-in as he is controversial. He purchased United Maintenance in 1996, shortly after Ben Stein passed away of natural causes that September at the age of 82.

Stein founded United Maintenance in 1955 and built it into a juggernaut in the sanitation industry. By the early 1960s, United Maintenance held a staggering amount of city and state contracts to clean numerous government buildings and facilities.

Stein’s contract to clean the offices of the Chicago FBI and U.S. Attorney of the Northern District of Illinois raised eyebrows and red flags with law enforcement. In 1966, Stein was convicted by the Feds for violating the Taft-Hartley Act; paying bribes to labor union leaders in exchange for preferential treatment in bidding janitorial jobs and winning long-term government co

When Rick Simon was a young cop on the force in 1980, Stein hired him to head his private security team. Simon’s moonlighting gig earned him a $30,000 side salary, double his pay for working the beat as a cop.

That same year, Simon became a “person of interest” in the disappearance of Karen Lee Koppel, one of Stein’s girlfriends. Koppel, 34, was last seen alive having drinks with Simon on April 26, 1980 in Chicago’s Rush Street nightlife district at Flapjaws Saloon. According to FBI surveillance logs, Stein often partied on Rush Street late into the night rubbing elbows with Outfit players and affiliates.

Per police informants, Simon had offered Koppel $10,000 to exit Stein’s life and eliminate the possibility of her disrupting Stein’s marriage. Both Stein and Simon pleaded the Fifth Amendment in refusing to testify in front a grand jury convened to investigate what happened to Koppel and why he went missing.

Public business records link Simon to reputed Chicago mob figure Billy Daddano, Jr., the son of deceased Outfit burglary rackets overseer “Willie Potatoes” Daddano. Stein and Simon were each questioned regarding the 1988 attempted gangland assassination of Chicago mafia lieutenant and Teamsters power Dominic Senese, but denied any knowledge of the botched hit. Simon was working as an investigator for the Cook County Sheriffs Department at the time the attempt on Senese’s life went down.

“Big Banana” Senese was wounded by a shotgun blast to the face as he got out of his new model Lincoln sedan to punch in the security code to open the gate of his exclusive Oak Brook housing complex. In the months prior to his shooting, Senese butted heads with Outfit administrators related to affairs inside Teamsters Local 703 (made up of produce workers). Senese, the longtime boss of Local 703, kept his mouth shut after the attack and died of natural causes four years later in 1992.