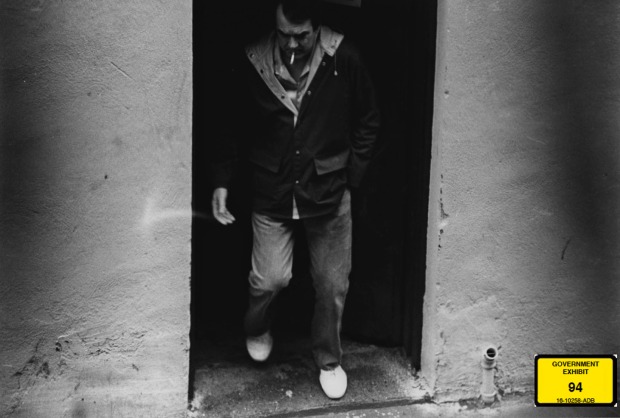 March 8, 2022 — Former New England acting mob boss John (Action Jack) Salemme was found guilty of murdering drug dealer George Pappas at the Four Seas restaurant in Boston’s Chinatown 40 years ago, but had his conviction tossed and was acquitted of the charges after 18 months behind bars. Pappas was shot to death as he ate a late-night meal in the early hours of October 13, 1981 while in the midst of a meeting with Salemme and Brian Holloran at a table in the back of the Four Seas Chinese bistro.

Pappas’ slaying was depicted on the big screen in the 2015 film Black Mass. Actor Peter Sarsgaard portrayed Halloran in the movie. Halloran was gunned down on May 11, 1982, alongside fellow innocent bystander Mike Donahue, outside a bar and grill resting off the South Boston waterfront. Per federal court filings, Halloran was cooperating or trying to cooperate with the FBI related to his knowledge of several Irish mob murders.

Halloran was part of the notorious Winter Hill Gang, otherwise referred to as Boston’s Irish mob. “Action Jack” Salemme, half-Irish on his mother’s side, was part of New England’s Italian mafia, known locally as the Patriarca crime family. Over the years, the two groups have traditionally worked both with and against each other, depending on the era and leadership of their respective organizations.

According to FBI records, Pappas had ripped off members of the Patriarca organization and South Boston’s Winter Hill Gang in a joint cocaine and marijuana venture and Salemme and Halloran were dispensed to deal with the problem. Salemme’s fingerprint on a can of Sprite tied him to the crime scene. He was indicted within three weeks and took off for the next two years, before turning himself into the Boston Police in March 1983.

During Salemme’s 20 months as a fugitive, Halloran and Mike Donahue were killed by Winter Hill Gang boss James (Whitey) Bulger, Boston’s ruthless and iconic Irish Godfather played by Johnny Depp in the lead role in Black Mass. The Halloran-Donahue double-homicide was also depicted in the film.

Salemme was found guilty in the Four Seas slaying at a 1984 jury trial and sentenced to life in prison, however, by the end of 1985, the Massachusetts Supreme Court had overruled the decision and issued an immediate acquittal on the grounds that the jury didn’t have enough evidence to convict him simply by the fingerprint on the Sprite can. The placement of the soda pop can at the table showed Salemme’s seat to be incongruent with the angle in which Pappas

Salemme’s older brother, Francis (Cadillac Frank) Salemme, would go on to become boss of the Patriarca crime family in the 1990s. At the time of the Pappas murder, Cadillac Frank was away serving a state prison sentence for extortion and attempted murder connected to a 1968 car-bombing attack of a Boston criminal defense attorney and mob associate.

The elder Salemme was released in February 1987 and politicked his way into power less than four years later, with his brother Jack and Bulger’s Winter Hill Gang by his side, despite a fierce resistance from the Patriarca’s East Boston and North End mob factions. When Cadillac Frank Salemme was on the run and incarcerated in the mid-1990s, Jack Salemme was appointed acting boss of the New England mafia for 1995 and most of 1996.

George Pappas’ son, Charlie, was killed in a November 1995 gangland slaying on Salemme’s watch as acting boss. Today, Action Jack Salemme, 79, is reportedly retired from the rackets and living quietly in the suburbs.

Cadillac Frank Salemme flipped and entered the Witness Protection Program in late 1999 after discovering Bulger had been a confidential informant for the FBI and was feeding the feds information on him for years. The 89-year old Cadillac Frank was yanked out of the program in 2016 and charged with the 1993 gangland murder of Boston nightclub owner Stevie DiSarro. He was found guilty in 2018 and is serving a life sentence in federal prison.

DiSarro’s body was dug up from underneath a converted Providence textile mill back in the spring of 2016 on a tip from the owner who helped bury DiSarro and got busted growing marijuana on the property. DiSarro co-owned a South Boston rock club turned strip joint with Salemme and Cadillac Frank worried that DiSarro’s mounting financial and legal problems with the government would send him scurrying to the FBI.

Jack Salemme was allegedly present when DiSarro was strangled to death at the Salemme family home in Sharon, Massachusetts, according to one eyewitness, but was never charged in the case. Bulger, who lived as a fugitive for close to two decades, was killed behind bars just two months after Salemme’s conviction in 2018 at age 89.

*An earlier version of this story inaccurately referenced victim Mike Donahue as a member of the Winter Hill Gang.