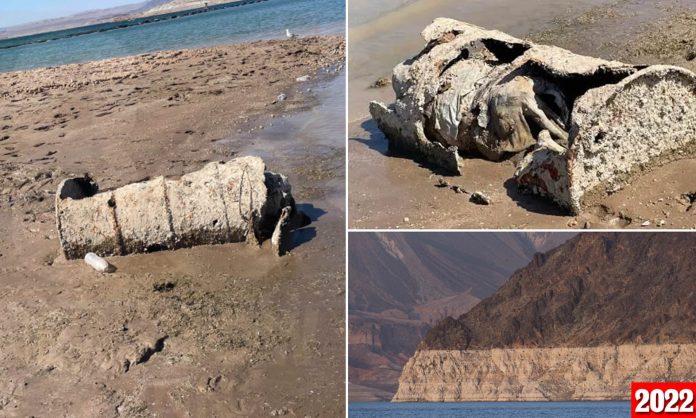 August 17, 2022 — Amid drastic lowering water levels, five bodies have now washed ashore on the banks of Lake Mead in Las Vegas since May. Are ghosts of The Ant lingering again?

The fifth set of human remains were discovered Tuesday.

Per sources in law enforcement, both state and federal investigators are deep-diving at least 5 cold-case mafia-connected murders and disappearances thought to be tied to the infamous Tony (The Ant) Spilotro crew which ran roughshod through the Strip during the 1970s and 1980s leaving loads of bodies and destruction in its wake. Spilotro’s maniacal antics were dramatized in the gangster-movie classic Casino in 1995, with Oscar-winner Joe Pesci famously playing a character based on Tony the Ant.

Lake Mead, the largest reservoir in the United States, is experiencing a substantial drop in water level with no sign of slowing down. The water level in Lake Mead is expected to drop another three feet by the end of 2023, according to experts in Nevada. Bodies are expected to keep emerging, too, as decades of secrets and water-logged silence surface to be probed.

The first body was found encased in a muddy barrel on May 1. The second on May 10. The skeletal parade subsided for a couple months and then picked up again on July 26 near a public swim park in Hemenway Harbor where more human remains discovered. On August 5, another set of remains was found around Hemenway Harbor.

“They’ve always joked that problems in Vegas are solved in the desert, but believe me, just as many have been solved at the bottom of Lake Mead,” remarked one former Spilotro crew associate. “Nobody knew or cared about future water levels in 1976 or whatever, they just knew Lake Mead was big and deep and could make a body go bye-bye.”

Las Vegas was once a gangster’s paradise and is a city with a trove of unsolved mob-related disappearances and murders linked to the old Spilotro regime. Spilotro was sent to Vegas in 1971 by mafia bosses in Chicago to look after the mob’s financial interests in the casino and hotel industry. He was heinously slain for his increasingly insubordinate behavior in June 1986, beaten, stomped and strangled to death in the basement of a Chicago residence in a macabre double-killing (his baby brother Michael was also murdered) depicted in Casino.

Federal law enforcement from that era credited Spilotro and his so-called “Hole In The Wall Gang” with more than two dozen killings in their 15 years rampaging through the desert sun with impunity. Several members of Spilotro’s crew disappeared between 1976 and 1983, including Bobby Shaw, Jay Vandermark, John (Johnny Pappas) Panagiotakos and William (Billy Bahama) Crespo. Police are actively investigating those missing person cases and attempting to link them to the bodies being found in or near Lake Mead in recent months. Investigators are also relooking into the case of an unnamed Vegas cocktail waitress that vanished in 1981 in the days after drawing Spilotro’s ire for spilling a drink on a member of his party in the VIP section of the chic disco Jubilation.

“We are deep-diving some old Spilotro-related cases, as well as a bunch more, drownings, boat accidents and such,” said one of the investigators who spoke on the condition of anonymity. “The stuff we’ve seen from the remains puts the date of death in the timespane of late 1970s, early 80s, right when Spilotro was going off the rails.”

FBI techs took DNA samples from Shaw’s relatives in May, suspecting he might be the body in the barrel. Shaw was last seen alive in the spring of 1977 in the Los Angeles area departing for Las Vegas. He was a drug dealer and thief that had met Spilotro through Tony the Ant’s L.A. lieutenant Joey Hansen, a seasoned mob burglar and hit man, who like Spilotro, was originally from Chicago. Hansen died of cancer in 2000.

Vandermark and Panagiotakos both went missing in the same three-week period in the late summer of 1976 in the wake of a series of FBI and IRS raids of casinos on the Strip that fell under Spilotro’s responsibilities to maintain order at for the mob. According to federal court records, Vandermark was placed in charge of the count rooms at four separate mob-owned casinos and tasked with overseeing the “skim” (the cash stolen directly from the casino and transported to mob shot callers in the Midwest). He disappeared on August 1, 1976 while being sought for questioning by the FBI. The last public sighting of Vandermark was in Phoenix with members of Spilotro’s Arizona crew.

“Johnny Pappas” Panagiotakos came to Las Vegas from Chicago and managed the mob-controlled Echo Bay Resort resting on the shores of Lake Mead. He vanished on the night of August 18, 1976 on his way to a meeting at Jo Jo’s Restaurant to discuss selling his boat. Pappas’ abandoned Lincoln Continental was found in the parking structure attached to Circus Circus casino.

“Billy Bahama” Crespo got busted with a shipment of cocaine on a flight going from Miami to Las Vegas in November 1982. He was acting as a courier for Chicago mob-skim money being invested into drug deals in South Florida, per his grand jury testimony. Crespo was on the verge of testifying against fellow Chicago mafia associates when he disappeared in June 1983.