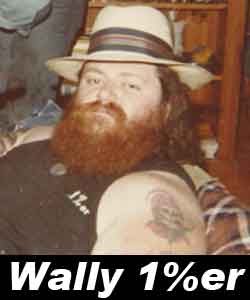 April 28, 2021 – The Outlaws Motorcycle Club has grown eastward from its Midwest roots and today the club’s power center revolves in and around Buffalo. Good ‘ole “Buffalo Wally” would be swelling with pride. He put The Outlaws on the map in Western New York.

Last week, the US Attorneys Office in the Western District of New York declared John (Tommy O) Ermin the international president of The Outlaws MC in court filings related to his employer, strip club owner, Peter Gerace, Jr. and Gerace, Jr.’s pending drug and prostitution case. Local crime historians note, however, there would be no rise of Tommy O to speak or write of if not for the rise and fall of Walter (Buffalo Wally) Posnjak, the region’s first formidable biker boss on a national level.

Ermin, 51, is the manager of Gerace, Jr.’s Pharaoh’s Gentlemen’s Club in Cheektowaga, New York, just outside Buffalo. Gerace, Jr. is the nephew of reputed Buffalo mafia don Joseph (Big Joe) Todaro, Jr., the owner of the highly-successful La Nova pizza and buffalo wing restaurant and product chain. The Outlaws and the Italian mafia have had firm ties dating back decades, especially in the collections and drug departments.

The 74-year old Todaro, Jr. has no criminal record but is allegedly the target of a multi-agency racketeering probe. He was once booted from a labor union post for his reputed mob connections, most notably his father, then-Buffalo mafia boss, Joseph (Lead Pipe Joe) Todaro (d. 2012).

The significance of Ermin’s rise to leadership in The Outlaws and where he resides is stunning to those who track the club for a living. The Outlaws is a Midwest club (founded in Chicago) and has never before had the club’s nerve center not situated in Illinois, Indiana, Michigan or Wisconsin.

The last time this much biker world power emanated from Western New York was back in the fall of 1994 when legendary Outlaws MC boss Harry (Taco) Bowman came to town and headed the funeral procession to bury Buffalo Wally Posnjak, killed in a racetrack brawl a week earlier. Bowman was headquartered in Detroit and utilized Posnjak as one of his main confidants and emissaries in his reign as international president (1984-1999).

Per DEA records, the popular and respected Buffalo Wally ran all Northeast operations for the beloved Bowman and The Outlaws brass in the Midwest. Buffalo Wally was a Midwesterner after all; the cherubic and furry Posnjak was a Russian immigrant and raised in Ohio. He became close to Taco Bowman in the 1970s, and per ATF records, one of the first things Bowman did upon his regime taking form in the early 1980s was tap Posnjak to be his shot caller on t

Bowman leaned on Buffalo Wally for counsel and muscle in The Outlaws’ ongoing war with the Hells Angels MC. The boiling tensions between the two groups resulted in Posnjak’s untimely demise. According to federal court documents, Bowman sent Posnjak to Chicago in the spring of 1994 to handle details in planning a bombing of the Hells Angels “support chapter” clubhouse.

Things went downhill from there and fast.

Meanwhile back out east, Buffalo Wally, 44, was living on borrowed time.

Posnjak and his right-hand man, Buffalo Outlaws MC boss David (Diamond Dave) Thornton, were jostling with Rochester Hells Angels boss Michael (Mad Mike) Quale for biker racket supremacy in Western New York, per DEA records. Much of the turf battle was fought over cocaine and marijuana sales. Thornton was indicted for overseeing a narcotics conspiracy in 1992, smuggling drugs from Florida for sale in Buffalo and Rochester.

Quale was originally from Buffalo and him and Posnjak had a lengthy history of bad blood. The Outlaws and Hells Angels clashed at the Lancaster Speedway in Lancaster, New York on September 25, 1994 in a brawl for the ages which took place inside the pits of the track for what was supposed to be a series of bike races staged that day. In the end, blood was shed instead and Buffalo Wally was shot to death in the melee and Mad Mike Quale was stabbed to death.

Bowman was locked up in 1999 and died behind bars of cancer in 2019 at age 69. His funeral had to be held at the Ohio State Fairgrounds outside Dayton to handle the thousands of mourners descending on the area from all around the country to pay their respects to the revered biker chief.

“Tommy O” Ermin is being compared to Bowman in Outlaws MC and law enforcement circles, per sources, in terms of vision and ability to galvanize the masses. Ermin has been the catalyst behind The Outlaws New England expansion campaign the past three years, responsible for the opening of almost a dozen new chapters across multiple New England states.