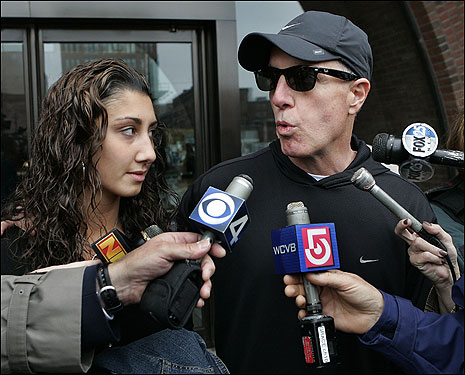 While for all intents and purposes Boston mob leader Vincent (Vinnie the Animal) Ferrara is retired from his life in the rackets, he is occasionally sought out for advice by New England mafia brass, per exclusive Gangster Report sources. His counsel from afar has been especially valuable in recent years, according to these sources, as the Patriarca crime family has come under siege by the government resulting in a string of crippling indictments, convictions and defections.

Ferrara, a one-time powerful capo and someone who people viewed as a future don candidate in his wiseguy heyday, was nailed by the feds in 1990 on charges of racketeering and murder. His plea agreement landed him a 22-year prison sentence that was reduced to 16 years after it was revealed that the main witness in the homicide he was charged with recanted his assertions and the federal prosecutor in the case failed to inform Ferrara and his attorney in plea negotiations.

Today, the 65-year old former Goodfella owns and operates multiple legitimate businesses in his old North End neighborhood stomping grounds. In the late-2000s, he was charged with participating in a mob-backed bookmaking ring, however was acquitted of the claims by a judge at trial.

The New England mafia has seen better days. Patriarca syndicate don Peter (the Crazy Horse) Limone isn’t as sharp as he used to be – reports indicate that Limone, 81, is beginning to slip mentally. Acting boss, Anthony (Spucky) Spagnolo is under indictment. Family underboss Carmen (the Big Cheese) DiNunzio just got out from prison, but is on strict parole restrictions. Former underboss Robert (Bobby the Cigar) DeLuca and heavily-feared capo Mark Rosetti (another Russo protégé) have both been unveiled as FBI informants.

Gangster Report sources say Ferrara has met privately with both Limone and Spagnolo on more than one occasion over the past couple years and asked to chime in on Family affairs. These sources are adamant that Ferrara has no financial investment or any form of personal interest in syndicate dealings, however takes the meetings “out of respect.”

The highly-educated Vinnie the Animal (business degree from Boston College) rose through the ranks of the Patriarca clan under the Angiulo brothers, overseers of the North End from the 1960s into the 1980s. The North End is Boston’s Little Italy and where the October 28, 1985 gangland slaying of New England mob associate Jimmy Limoli took place, the murder Ferrara was charged with ordering.

According to FBI documents, Ferrara was “made” in 1983 and quickly upped to captain status, mentored by East Boston mafia figure Joseph (J.R.) Russo. Ferrara and Limoli were friends and early partners in crime. Along with a pal named, Patsy Barone, they are suspected of carrying out the murders of Jack (Jackie D) Di Fronzo and Anthony (Dapper Tony) Corlito, underworld adversaries of Ferrara’s who had been robbing Angiulo brothers’ gambling dens, per court filings..

Limoli himself got in hot water by robbing drug dealers without sanctioning. When $100,000 of Spucky Spagnolo’s cocaine came up missing in September 1985, per court records, it was the final straw. Vinnie the Animal’s boyhood chum had a murder contract placed on his head. And if you believe the federal government, Vinnie the Animal put it there and Barone carried it out in front of the North End’s D’Amore’s Restaurant.

Around this time, Ferrara and J.R. Russo began a push to take over the Family, trying to force Raymond Patriarca, Jr., the successor to his father and crime family namesake Raymond Patriarca, Sr. (died in 1984), to step down. After the murder of Patriarca, Jr.’s underboss William (Billy the Wild Man) Grasso and the severe wounding of syndicate heavyweight Francis (Cadillac Frank) Salemme just hours apart in a coordinated double-hit in June 1989, Russo and Ferrara ceased their coup attempt and were secretly recorded in a conciliatory induction and promotion ceremony that took place that fall, seeing several Russo and Ferrara-loyalists “made” into the Family and Russo tabbed consigliere and street boss.

Ferrara was also taped shaking down legendary Jewish bookie Harold (Doc) Sagansky, the Boston area’s largest sports handicapper and lay-off bank, for a half a million dollars in 1987. Alongside his bodyguard  Dennis ( Champagne) Lepore, Ferrara cornered Sagansky and his right-hand man Moe Weinstein at a restaurant in downtown Boston owned by grizzled New England gangster and FBI informant Angelo (Sonny) Mercurio that was wired for sound – Mercurio helped the feds bug the making ceremony as well.

Faced with a demand for a immediate $500,000 street tax, the elderly Sagansky, a former dentist, balked at the request.

“Frankly, I don’t give a shit,” Ferrara allegedly responded.

On that note, Vinnie the Animal and Denny Champagne informed Sagansky that they were keeping Weinstein as collateral until he returned with the money, which he did the following afternoon.

The whole Borgata was staggered by a 1990 federal RICO indictment, sending Ferrara, Russo and Patriarca, Jr. to prison and leaving Cadillac Frank on top. Salemme was eventually convicted in a RICO and turned witness for the government. Russo died behind bars. Patriarca, Jr. was freed in 1998, Ferrara in late 2005. Like his former rival Vinnie the Animal, Patriarca, Jr. has left his life in the mob behind and gone legit, making a living as a real estate salesman in Rhode Island.