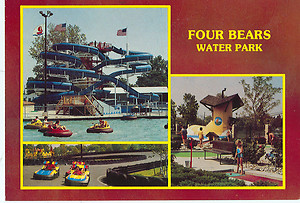 Public water parks aren’t the cleanliest of destinations, but ultimately serve a purpose. Organized crime isn’t the most ethical way to make a living, but it’s something that nonetheless exists, and ultimately plays a role in society, whether out in the open or deep underneath the surface. Although entrenched in the shadows of public perception across Metro Detroit, the mafia is an undeniable force, existing, often with a shiny veneer of respectability, in many different avenues of everyday life.  Using a public water park as an analogy for organized crime isn’t all that difficult, especially since in the Motor City, at least according to federal documents, they were long linked in tandem.

Whether you choose to dabble in organized crime, or just like to frequent public water parks, there are inherit risks involved that everyone involved knows and accepts. So, for the sake of your family — or for the sake of The Family — you cast your reservations aside and “jump in,” accepting the less than sanitary conditions. Once you’re there, ‘in the water,” so to speak, you’re there. Like it or not, it can’t be undone.

While water parks throughout the land emit a certain grimy charm, not to mention serve as a microbiologist wet dream with all the different forms of germs swarming around such establishments, the filth uncovered in the bottom of your run of the mill public pool pales in comparison to the real dirt that was alleged to gave gone down at Four Bears water park in Shelby Township, Michigan in the 1980s.

From 1983-2004, the suburban park created summer memories for countless families. Ask almost any resident of Metro Detroit about Four Bears and chances are the individual will rattle on about the park’s grand water slides, wave pool or bumper boats — a far cry from a would-be coke overdose, a self-inflicted gun shot wound to the chest and a slew of allegations and whispers that kept local and federal law enforcement officials relatively busy for much of the final two decades of the Twentieth Century.

The park, located in the heart of suburbia, a little more than 20 miles north of Detroit, lasted 21 years before it was demolished in favor of luxury homes and condominiums. But its legacy lives on. It was truly a metro Detroit staple. The man who made it all possible — the same man who was once at the center of numerous allegations linking him to organized crime and other nefarious activities — was the water park’s notorious owner Louis Stramaglia, a man his friends affectionately referred to as “Butch.” Stramaglia, a wealthy businessman and owner of a slew of companies around the country, was known to carry himself with a larger than life bravado and intimidating flair.

“Butch is hard-core, not someone to be messed around with,” said a former federal agent who asked not to be identified. “He was someone we always had our eyes on.”

Whispers of shenanigans and more than questionable business practices related to his asset portfolio were rampant.

“There were rumors that drug money and profits from some other illegal operatiosn were being run through Four Bears,” said an unnamed federal agent. “Whether Butch was aware of this, we could never prove.”

And the Feds almost had him. They were the thinnest thread away from nailing him to the wall for good, putting him behind bars for the better part of the rest of his life. But Butch, as he would begin making a reputation for, averted the grasp of law enforcement and remained virtually unscathed.

For nearly a decade, Stramaglia and his construction company, Vito Trucking and Excavating, found themselves in the newspaper headlines for all the wrong reasons; shoddy work, kickbacks, sweetheart deals, intimidation tactis, and other racketeering-related activities. This reputed behavior helped trigger a 32-month criminal investigation that ended with Butch facing more than 80 years in prison. The water park and construction impresario was charged with embezzling $1.7 million dollars from a highly lucrative, publicly financed deal he struck with Dade County in Florida to build the Sawgrass Expressway, a 23-mile stretch of highway that would cost $200 million to complete. Having his veil of legitimacy shattered, Stramaglia was found guilty on all 38 felony counts and sentenced to 50 years in prison.

Always the scamster, however, Butch found a way to get out. After just two years in the can, Stramaglia was a free man. A federal judge overturned all 38 felony counts he was convicted of on a technicality and in 1993 Butch returned to Detroit. As luck would have it, the only two other men who might be able to put him back behind the prison fence he just escaped from were now long dead, put to rest six feet under years earlier, their deaths shrouded in mystery. Butch’s name would pop up in both investigations, but he would never be charged in either case.