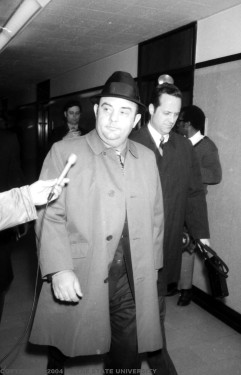 I got an offer I couldn’t refuse.

I was invited to break bread with a real-life mob don.

Previously, I had sat and conversed with professional hit men, soldiers, capos, consiglieres and underbosses, but never a Godfather.

Now, former Detroit mafia “acting boss” Anthony (Tony Z) Zerilli, wanted to have lunch with me to discuss some possible future projects for us.

if I said I wasn’t intrigued I’d be lying to you.

Granted, most of Zerilli’s time in the upper-echelon of La Cosa Nostra was as an underboss, No. 2 in the Motor City mob for more than two decades, between 1979 and 2002, but this guy existed in some pretty rarified air in his day – rubbing elbows and conducting business with American icons, both in gangland circles and pop culture, and holding quite a large deal of weight nationally and internationally, alike.

Tony Z was at the helm of the Detroit mafia in an acting capacity from 1965 until he was jailed in 1973 for skimming six million dollars from and holding illegal hidden ownership in Las Vegas’ Frontier Hotel and Casino. Although he once was tapped the official heir apparent to his dad’s throne – legendary Detroit Godfather Joseph (Joe Uno) Zerilli ruled unfettered for 41 years and sat on the national mafia Commission – , he was bypassed while behind bars by his first cousin, Giacomo (Black Jack) Tocco.

Zerilli, 86, frail, yet still spunky, has been out of action in the area’s LCN affairs, since he went away to prison in the early-2000s and served a 5-year sentence on a RICO conviction.

Tocco, 87, and Zerilli were each snared in the big Operation GameTax bust of 1996, charged and eventually convicted in separate jury trials of running the day-to-day operations of the Detroit mob for close to 30 years.

According to sources on the street and in law enforcement, Tony Z, was “shelved” due to Black Jack blaming him for the bust (it was Tony Z’s underlings that were caught on tape and it was that audio surveillance that did the most damage in both trials).

These are allegations Zerilli himself denies, asserting instead he voluntarily left the crime family his father and uncle (Black Jack’s father, “Black Bill”) founded, over a dispute with Tocco regarding money and Tocco’s decision to involve the syndicate in narcotics.

Upon their respective releases from incarceration, their feud has become increasingly-bitter and out in the open. Zerilli went to the FBI and the media in December 2012 and fingered his boyhood pal’s and longtime business partner’s former farmland property as the final resting site of slain labor boss Jimmy Hoffa – a search of the parcel turned up empty last summer.

All of this, along with much more, was peppered into our conversation at lunch, which took place last week at The Stage Deli, a popular eatery in suburban Detroit.

It was me, a tan and trim Tony Z, his daughter and wife Rosalie, the daughter of deceased New York mob don, Joe Profaci, the basis for the Vito Coreleone character in Mario Puzo’s book and Francis Ford Coppola’s movie, The Godfather.

I got a turkey-bacon club, he got a corned-beef sandwich and split it with Rosalie.

From the very start of the conversation, you could tell two things very clearly; he worshiped his dad Joe (and rightfully so) and despised Jack Tocco.

“My father had brass balls, the size of boulders,” he said.

I mentioned his grandmother’s funeral when he was a small boy (1933), the largest funeral precession in Motor City history, drawing thousands of mourners and onlookers. Joe Zerilli sent his mother off with a grand gesture, lining the streets near her house and by the graveyard she was being buried in, with a seemingly endless amount of elaborate flower arrangements.

“Everyone came to pay their respects to my dad for his loss, it was a sea of people and they waited on-line for hours to give him their condolences,” he said. “Sam Buffa was throwing rose pedals from an airplane above the gravestone.”

Sam “Tootie” Buffa was a loyal soldier of Joe Zerilli’s, looking after the city’s Greektown district until his death in the 1950s.

We talked about Jimmy Hoffa and Tony Z’s love of horse racing and his ownership of the Hazel Park Racetrack for close to 50 years, ending in a multi-million dollar sale. According to Tony Z, his half of the sale (some 4 million dollars) was stolen by Tocco while he was in prison in the 2000s, resulting in their current standoff.

We talked about his interactions with notorious and long-gone Mafia leaders like Sam “Momo” Giancana of Chicago, “Big John” La Rocca and Mike Genovese of Pittsburgh.

We spoke of Las Vegas and him owning the Frontier, which he sold to Howard Hughes at a lunch meeting after his arrest for raiding the gambling palace’s coffers.

There was much, much more. And it was all fascinating.

To hear the rest, you’ll have to wait for the book!!