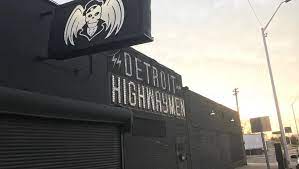 December 25, 2021 — The original Highwaymen Motorcycle club headquarters on Michigan Avenue in Detroit burned to the ground in the early spring of 1999 in what the DEA and FBI believes was an arson to cover up a murder that occurred on the premises. On March 5, 1999, Highwaymen prospect Juan (Runaway) Butler was stabbed and beaten to death. His body washed ashore on the banks of the Detroit River in April. Nobody has ever been charged in his homicide.

The Highwaymen “Mother Ship” clubhouse went ablaze on March 6, less than 24 hours after Butler’s slaying, per federal documents detailing club activity. Butler had been stabbed close to 40 times and experienced massive blunt-force trauma to the head. According to one former high-ranking Highwaymen member, Butler was killed inside the clubhouse.

Today, a new nerve center of operations for the biker gang is in jeopardy of being shuttered. The club’s three-building compound on Michigan Avenue, not far from where the original clubhouse stood, in the subject of eviction proceedings in Wayne County Circuit Court. One of the buildings that comprise the Highwaymen’s Mother Ship doesn’t belong to the gang. It belongs to land developer Milton Hall and he’s been attempting to kick the Highwaymen off his property for the past five years. The Highwaymen’s attorney says it’s merely a case of errors on the respective deeds.

During his debriefing by the feds, former Highwaymen MC vice president Danny (Rocket) Sanchez, told the government that Highwaymen bosses Leonard (Big Daddy) Moore and Anthony (Mad Anthony) Clark were responsible for Runaway Butler’s murder. Sanchez was the star witnesses at Moore, Clark and several other Highwaymen leaders’ trial for drugs and racketeering in 2010. Butler’s homicide wasn’t included in the case. Moore, 73, and Clark, 63, were both found guilty of racketeering.

Butler’s mother disrupted Sanchez’s testimony at the trial, rising from the back of the courtroom, pointing at him and screaming “They killed my son, that man killed my son.” Butler was said to have stolen from t

The 45-year old Sanchez is living in an undisclosed location in another part of the country under an assumed identity in the Witness Protection Program. Big Daddy Moore, the club’s Godfather, was released from prison last year amid the pandemic and is serving the remainder of his racketeering conviction on home confinement. Mad Anthony Clark hails from the Highwaymen’s Westside chapter and was once the club’s national president. He got out of prison in 2017. The Butler murder case remains an open investigation with the FBI and the Detroit Police Department.

Juan Butler grew up in Southwest Detroit, a mostly-Hispanic community in the shadow of the Ambassador Bridge, separating the United States and Canada. The Highwaymen MC was founded on the city’s Southwest side in the 1950s and has always had a presence in the neighborhood.

As a 14-year old boy, Butler was arrested for throwing a firebomb into a neighborhood storefront as an induction ritual for a local notorious drug gang known as the Cash Flow Posse and sent to a juvenile detention facility in Saline, Michigan, a half-hour’s drive west of Detroit. Sprung from the Saline facility in the summer of 1998, Butler began gravitating towards the Latin Counts, another well known Southwest Detroit crime syndicate, per police records.

Rocket Sanchez flipped in 2007 after he was indicted. He admitted to luring Butler to his slaughter, helping murder him and dispose of his body and then torch the Highwaymen’s former clubhouse.

The Highwaymen MC is the state of Michigan’s oldest and largest biker gang, started in Detroit in 1954 by Elburn (Big Max) Burns. The club also has chapters in Indiana, Florida, Kentucky, Tennessee, Alabama, New York and New Jersey. There are eight chapters in Michigan alone. Big Max Burns died of natural causes in 1980.