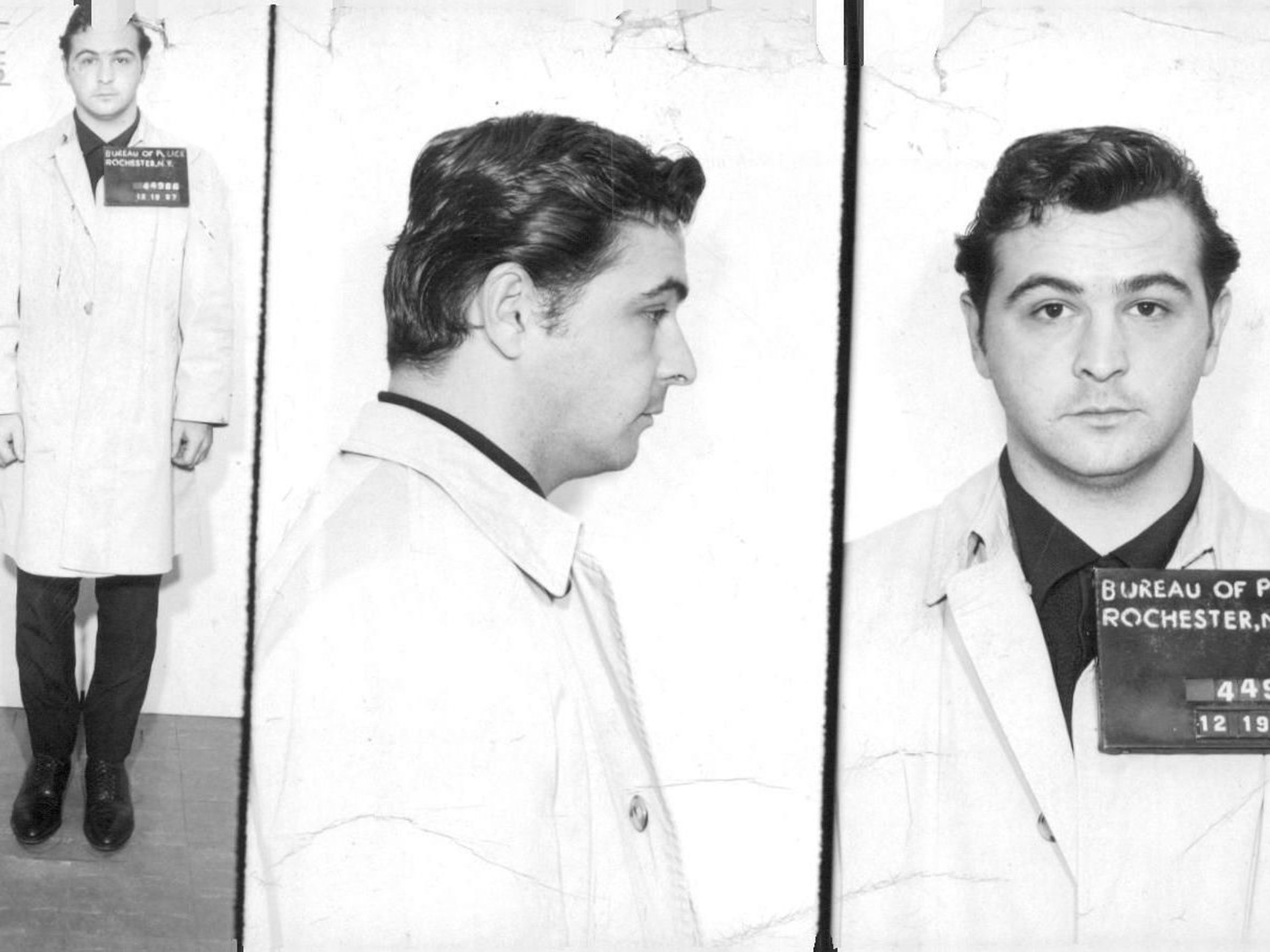 Last week, a voice from the grave went on-record about a cold-case mob hit from upstate New York when The Democrat & Republic newspaper printed excerpts from a 2009 video-taped interview with retired Rochester mob consigliere Rene (The Painter) Piccarreto about what happened to Jake Russo, the city’s mafia don in the early 1960s who disappeared in 1964.

The debonair Piccarreto died of natural causes in 2014, living in California. In the years before he passed, he was recorded telling a filmmaker that Russo was strangled to death in the basement of a Rochester restaurant and lounge on September 12, 1964, killed because he clashed with Buffalo mob chief Stefano (The Undertaker) Magaddino over a street tax Magaddino was trying to levy on the rackets in Rochester. Russo’s body has never been unearthed

Russo’s grisly demise foreshadowed the violent unrest that would go on to plague the city’s mob in the coming decades. The Alphabet Wars of the 1970s and early 1980s dominated the headlines and decimated the syndicate to the core. Equally well liked and well groomed, Piccarreto was the Rochester mob’s consigliere from 1964 until he was jailed in 1984.

Below is a blow-by-blow account of all the city’s biggest mob murders:

September 12, 1964 – Rochester mafia boss Jake Russo disappears on his way to a meeting at Frank Valenti’s restaurant The Quill Room. Valenti consolidated mob interests in Rochester in the 1950s before being booted from the state for legal problems and then returning to assume the throne in Russo’s absence. Russo had refused to pay a tribute to Buffalo mob don Stefano (The Undertaker) Magaddino and offended Magaddino by threatening to go over his head to resolve the issue.

February 23, 1965 – Rochester mob enforcer Dominic (The Deacon) Alloco is shot in the back of the head, hogtied and tossed in a field in Walworth, New York after accruing substantial gambling debts.

September 21, 1967 – Rochester mob soldier John (Johnny Broadway) Cavagrotti vanishes. He is last seen getting into a car with local gangland rising star Salvatore (Sammy G) Gingello. Cavagrotti was feuding with Valenti over how much money from Cavagrotti’s bookmaking business Valenti was entitled to as boss.

December 22, 1967 – Rochester mob collector Norman (Big Norm) Huck is slain after disrespecting Valenti and several of his men at a restaurant by taking a bottle of wine off their table and smashing it.

Massaro over a woman.

February 18, 1970 – Rochester mob captain Billy (The Wolf) Lupo is found shot to death slumped behind the wheel of his car. Lupo had once served as Frank Valenti’s bodyguard and driver. Sammy Gingello is named a capo and assumes control of Lupo’s crew.

December 14, 1970 – Rochester wiseguy William (Billy the Kid) Constable is killed for trying to muscle in on mob rackets.

June 5, 1972 – Rochester mob soldier Dominic (Shotgun Dom) Chirico, Valenti’s most trusted lieutenant and enforcer is shot-gunned to death outside his girlfriend’s apartment building. Valenti flees the state and Sam (Red) Russotti takes his place in the wake of Valenti getting exposed for stealing from the organization.

April 3, 1973 — African-American Rochester mob associate Ernie (The Cat) White is killed, his body dumped under a local bridge, the day after he was part of an armed-robbery crew that knocked off a Department of Motor Vehicles office in Irondequoit, New York.

November 23, 1973 – Heavily-feared Rochester mob enforcer Vincent (Jimmy the Hammer) Massaro, a Valenti loyalist, is killed and stuffed in the trunk of his car after bucking under the thumb of the city’s new mafia regime.

April 23, 1978 – High-profile Rochester mob underboss Salvatore (Sammy G) Gingello is killed in a car bombing in front of Ben’s Café Society Social Club, setting off the Alphabet Wars. The Russotti and Gingello faction of the organization became known as the A Team. Their former acting boss Tommy Didio, who opposed their leadership, was dubbed the B Team. Gingello’s bodyguards, Tommy Torpey and Tommy Taylor, would go on to start the so-called C Team.

July 6, 1978 – Renegade Rochester mob chief and B Team boss Tommy Didio is machine-gunned to death inside a room at the Exit 45 Motel in Victor, New York.

December 17, 1981 – Rochester mob capo and labor union leader John (Johnny Flowers) Fiorino is shot-gunned to death outside the Blue Gardenia restaurant by John (Mad Dog) Sullivan, on orders of the C Team. The Blue Gardenia was a favorite area mob haunt of that era. Fiorino was a Teamsters vice-president.

May 25, 1982 – Rochester mobster and C Team member Nick Mastrodonato is slain allegedly by an A Team gunmen.

August 26, 1982 – Rochester mobster and C Team member Gerry Pelusio is killed in a hail of shot-gun fire in an attack on him and his brother and fellow C Team affiliate Tommy Pelusio.