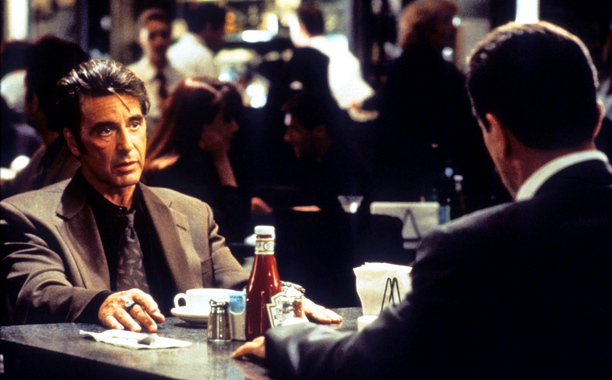 January 21, 2022 — The famous Robert DeNiro-Al Pacino scene in the movie Heat where Pacino’s super cop and DeNiro’s super thief have coffee at a non-distinct Southern California diner discussing the inevitable deadly collision course their two characters were on really happened in 1963 at Chicago’s once massively popular, Belden Deli, which today only remains in the form of a memory.

According to Chuck Adamson, the hard-charging police detective that inspired Pacino’s role in the film, the encounter and dialogue you watch on screen is almost an exact move-by-move, word-for-word recreation of the actual real event.

“I didn’t know whether to shoot him, arrest him or buy him a cup a coffee,” Adamson described his initial feelings about the odd face-to-face encounter. “I chose the latter.̶

Almost a year following their shared cup of coffee at the Belden Deli in 1964, Adamson ended up shooting his rival to death on the job.

The Belden Deli was located on Clark Street in Chicago’s Lincoln Park neighborhood on the near Northside. The establishment was open 24 hours a day from when it opened in 1957 until shuttering in 1988 to make way for a renovation that converted the building that housed the Jewish-style comfort food paradise into apartments and a giant Tower Records. A block south of the deli’s former location on the other side of Clark Street is the site of the St. Valentine’s Massacre. The story in the movie adaption changed cities from Chicago to Los Angeles.

Helmed by native Chicagoan Michael Mann, Heat was released in 1995 was the first time the iconic actors DeNiro and Pacino appeared on the screen together at the same time. Pacino’s L.A. cop character Vincent Hanna is based on Adamson, who worked in the Robbery-Homicide Division of the Chicago Police Department for decades before transitioning to Hollywood screenwriting and co-creating the cult-classic 1980s NBC television drama Crime Story alongside Mann at the height of his Miami Vice success. Adamson penned a number episodes of Miami Vice for Mann.

DeNiro’s ultra-disciplined thief character, Neil McCauley, is based on a real-life Windy City underworld figure with the same name who Adamson tracked for a near five-year period in the 1960s and eventually killed in a shootout in the aftermath of an armed robbery. Adamson died of lung cancer in 2008.