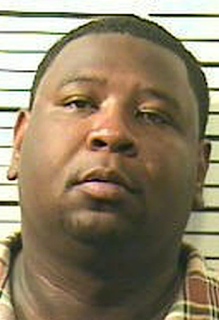 HoneyKomb Brazy is the latest red-hot offering from Houston hip hop mogul James Prince and being touted as a future superstar of the Southern rap genre. The Lewis’ were killed when a hit team riddled their home with automatic weapon fire and it exploded almost exactly one year ago on February 17, 2021.

Southall, 43, was also slapped with a 35-year federal prison term for narcotics trafficking, money laundering and escaping from a county jail on Friday. He escaped from the Clarke County Jail last spring for a short period of time before being apprehended

Per sources in law enforcement, Southall is believed to have ordered the Lewis’ slain because of an ongoing simmering feud with the couple’s rapper grandson, whose real name is Nashon Jones, but goes by HoneyKomb Brazy in the music industry. The Lewises had been married for more than 50 years and were both fighting COVID-19, requiring them to carry around oxygen tanks, which acted as the accelerant to blow their house up once the shooting began.

Back in November, Southall pleaded guilty to dealing 4,000 kilos of cocaine and 24 kilos of heroin and agreed to forfeit 2.3 million dollars in cash, as well as close to a million dollars in jewelry and 18 luxury vehicles. According to his indictment, Southall served prison time for drugs and a shooting at a Pritchard, Alabama restaurant, prior to being released in 2015. His post-incarceration criminal empire stretched to Mississippi, Georgia, Florida, Texas and Louisiana.

The 28-year old HoneyKomb Brazy was born and raised in Atlanta and is signed to J Prince’s iconic Southern hip-hop label, Rap-A-Lot Records out of Houston. Under Prince’s tutelage, he has released three chart-topping singles since 2020.