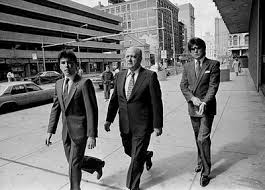 Philadelphia mobster Frank (Windows) Narducci, Jr. has returned to a familiar locale and it’s a place, in a tinge of nickname irony, with very few windows available for gazing.

Narducci, Jr., one of a slew of “Scarfo era” soldiers to reemerge on the South Philly streets in the past several years after lengthy prison sentences spawning out of a gigantic 1980s racketeering and murder case, was arrested and taken back into federal custody Tuesday night – news first broken by award-winning investigative journalist and local FoxTV affiliate reporter Dave Schratwieser on his Twitter account.

Why the 60-year old Narducci, Jr., the son of a slain 1980s Philadelphia powerbroker and the brother of an alleged mob juggernaut in the city of Brotherly Love today, is cooling his heels in a federal detention center is unknown at this time.

His baby brother is Phil Narducci (52), someone the FBI and mob insiders peg a faction leader or part of a ruling panel atop the Philadelphia mafia these days. His father was Frank (Chickie) Narducci, a capo that was killed in January 1982 following taking part in an unsuccessful palace coup and the unsanctioned murder of Philly don Philip (The Chicken Man) Testa, less than a year earlier.

Editor’s Note: the featured image in this story is of the three Narducci men walking into a court appearance in the early 1980s

The elder Narducci was ordered dead by Nicodemo (Little Nicky) Scarfo, Testa’s close friend and successor as boss of the east coast crime family, soon to make a reputation for itself as hands down the most bloodthirsty and dysfunctional Italian mob syndicate operating in the United States of America. Scarfo was the same man that “made” the Narducci brothers in the years after Chickie’s execution, ushering them into the same Borgata that he killed their dad to maintain control of.

Both Narducci brothers were allegedly involved in the 1985 Frank (Frankie Flowers) D’Alfonso hit, a gangland assassination keyed by Scarfo’s greed and carried out in broad daylight on a busy South Philly street corner. According to court testimony, Phil Narducci was one of the shooters, Windows a getaway driver for his brother and reputed current consigliere Joseph (Uncle Joe) Ligambi, fingered as the other triggerman – convicted of the murder at the ’89 trial, they had the conviction tossed in the 199os and won an acquittal in a 1997 retrial.

Virtually the entire Scarfo era Philadelphia mob was crushed in an epic late-80s federal legal assault, concluding with convictions at a 1989 trial and then the “flipping” of Scarfo’s nephew, surrogate son and underboss Philip (Crazy Phil) Leonetti.

Scarfo will die in prison. Leonetti has been free since 1992 and lives under an assumed identity. Starting in the early 2010s, Scarfo’s once-young buck goombahs – a group of then-Twenty and Thirtysomething he inducted into the mafia – began filtering out from behind bars.

Windows walked free first, Phil was released in 2012 and, per sources, has carved out substantial racket territory for himself while maintaining a fragile and somewhat-complicated balance of mob leadership on the South Philly streets with three different subgroups being represented, two from within the Scarfo era camp and the other headed by 1990s era start-ups Joseph (Skinny Joey) Merlino, Steven (Handsome Stevie) Mazzone and John (Johnny Chang) Ciancaglini.

Merlino, depending on who you ask, either the long-reigning Godfather of the Philadelphia mafia, a Florida restaurateur or both, recently walked from a near four-month stay in a Miami federal prison for a parole violation. The Merlino crew was brought down at a 2001 trial, however, like their predecessors in the Scarfo crew, have all flown the proverbial prison coop and are allegedly back bobbing and weaving in the South Philly underwold.