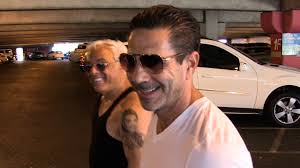 Merlino reported to a federal correctional facility in Miami on Monday afternoon, ordered to serve four months for violating his parole spawning from his 2001 RICO conviction in which he spent 12 years behind bars. He’ll be out in early May and immediately “off paper.”

Since being released from his initial sentence in 2011, the charismatic, quip-filled and always media-friendly 52-year old mob boss has been living in South Florida and recently opened up a restaurant in Boca Raton (reportedly financially-backed by associate Stan Stein), called…what else?…..”Merlino’s”, where’s he been acting as a maître de, schmoozing with patrons and dishing out healthy portions of his mom’s recipes.

His parole violation stems from a dinner this past summer that Merlino attended with his reputed underboss John (Johnny Chang) Ciancaglini at a Boca Raton cigar bar and nightclub. When he walks free this spring, he’ll be free to socialize with whomever he wants.

“I bumped into Johnny Ciancaglini and I forgot to report it to my parole officer, it slipped my mind” Merlino told the judge late last year at a court hearing addressing the matter.

Two FBI agents testified at the hearing that they followed Skinny Joey that evening in June to his rendezvous with Ciancaglini at Havana Nights in Boca and watched from the bar as the pair of gangsters ate and chatted in a private dining room in the club’s VIP section with the establishment’s owner.

He denies participation in any current underworld activities

. The FBI on the other hand insists he’s returned to his old job as Godfather of the Philadelphia LCN branch, a position the government claims he’s held for close to two decades and overseas through intermediaries like Ciancaglini and his close friend and alleged “street boss,” Steven (Handsome Stevie) Mazzone, back home in Pennsylvania.

Sources in law enforcement confirm reports of an on-going investigation into Merlino’s affairs by the FBI and IRS. Mazzone and Johnny Chang were nailed alongside Merlino at his RICO trial and both got out of prison in 2008.

Not surprisingly, the notoriously-social Skinny Joey, a staple in the Philly media headlines and gossip columns for over 20 years and a gangster celebrity on the East Coast of the highest caliber, has taken to the modern technology age and world of social media like a fish to water. Maintaining an Instagram account loaded with photos of his restaurant, friends and family to show off his new South Florida swagger, Merlino hasn’t been shy in living it up in his time in the sun these past few years – wearing expensive clothes and jewelry, tooling around in luxury vehicles, living in a glitzy seaside condo complex and frequenting the area’s most chic eateries and nightspots.

Merlino and Mazzone fought side-by-side in a bloody mob war for control of the formerly-titled “Bruno-Scarfo” crime syndicate in Philadelphia in the early 1990s. The violent, multi-year struggle cost them their best friend and Johnny Chang’s little brother, Michael (Mikey Chang) Ciancaglini, slain in a drive-by shooting in the summer of 1993 as tensions peaked. Mikey Chang’s murder led Merlino to stage a daring, morning rush-hour timed hit on their rival, Sicilian-born mob boss John Stanfa, on a crowded local expressway weeks later that failed.

Stanfa was jailed in the spring of 1994, at which point Merlino and a one-time prison cell mate of his named Ralph Natale (Federal Witness Protection Program) assumed command of the Philly LCN Family on the street until they were indicted in 1999.

The day before heading to his federally-funded winter getaway in lock-up this week, Merlino texted with reporters, embracing his future short-stay in the can in his typical tongue-in-cheek tone.

“I can’t wait to go,” he wrote. “I need the vacation after working so hard at the best restaurant in Florida. I look at it like this: l’ll have time to work on my six-pack and will be in great shape for when I get out in the spring for Cinco De Mayo.”

Those who know Skinny Joey personally aren’t surprised by his reaction.

“That’s just Joey being Joey,” said one of his associates. “You think he’s going to let the Feds believe this whole thing is effecting him? Forget about, it. Once he does this bit, he’s off the books. He’s in the clear. A guy like Joey can do four months in his sleep.”