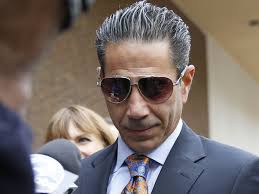 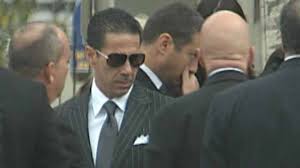 Philadelphia mafia boss Joseph (Skinny Joey) Merlino is headed back to prison for four months because of a parole violation committed over the summer.

He’s also at the center of multiple criminal investigations by law enforcement agencies in Pennsylvania and Florida, according to highly-placed sources in the government and court testimony last week, and hustling his way through Hollywood and the Boca Raton restaurant scene.

Both the Philadelphia branch of the FBI and the Palm Beach County Sherriff’s Department have active investigations going, “aggressively” looking into Merlino’s activities since his release from prison on a racketeering conviction in March 2011, at which point he relocated to Florida.

The brash and magnetic 52-year old Skinny Joey was found guilty at a circus-like 2001 trial, where his former mentor and boss, turncoat Bruno-Scarfo Family Godfather Ralph Natale, testified against him and several of Merlino’s close friends and gangland cohorts about how together they killed their way to the top of the Philadelphia mafia in the 1990s.

Although considered a prime suspect in a number of mob slayings and attempted murders, Merlino, who blasted into the East Coast news headlines over two decades ago as a young aspiring mob chief  and charmed the press and public alike with his slick, quick-witted style and self-deprecating humor, has never been convicted of a homicide.

Merlino has been vocal in recent years proclaiming he is no longer living a life of crime nor involved in mob affairs currently transpiring in his hometown. Authorities say otherwise. The FBI believes he is the boss of the Philadelphia mafia, ruling his kingom from afar, and has been ever since he departed the City of Brotherly Love for a federal prison cell in the summer of 1999.

Sources in the FBI say Merlino is using longtime pals Steven (Handsome Stevie) Mazzone and John (Johnny Chang) Ciancaglini (both nailed with Skinny Joey in the 2001 case), as his “fronts” back home. They tab Mazzone the “acting boss” or “street boss” and Johnny Chang the underboss, responsible for relaying messages and orders from Merlino and Mazzone to the Family’s rank and file. Joseph (Uncle Joe) Ligambi, the one-time acting boss when Merlino was incarcerated, fills the syndicate’s consigliere post, having just averted being convicted of federal racketeering charges at two trials that ended in hung juries.

Three members of a federal organized crime task force testified last week at Merlino’s parole violation hearing that they have been trailing Skinny Joey for three years, including on the night this past June that he met with Ciangalini in the VIP section of Havana Nights, a restaurant and cigar bar in Boca Raton.

Weeks away from getting off parole in September, the FBI produced photos of a meeting between Merlino and Johnny Chang back in the summer, a violation of his parole restrictions with Ciancaglini being a convicted felon. Last Friday afternoon in a Philadelphia federal courtroom, he was officially citing for the violation and ordered back to prison for four months beginning after Thanksgiving. When he’s released in early spring 2015, Merlino will be “off paper” and free of any legal restrictions on his movement.

ces tell the Mafia Insider that the photos of the June meeting are part of a set of images they’ve snapped of Skinny Joey holding court with convicted or alleged members of the Philly crime syndicate in Florida and Pennsylvania (he returned for his dad’s funeral last year and has been making the rounds in his old stomping grounds since the beginning of October awaiting his court date) over the past 30 months.

“Joey’s still on top and in order to stay on top you need to communicate with your men, which he’s been doing, sometimes face-to-face, sometimes through a group of buffers, friends of friends, wives or cousins of friends and the like,” said one of the Fed sources. “The mob is in his blood, don’t let him fool you, he’s not just going to leave it all behind. He’s got too much skin in the game.”

Merlino’s dad was Salvatore (Chucky) Merlino, the former Philadelphia mob underboss during the 1980s. Chucky Merlino died behind bars in 2013. Merlino himself has dodged some two dozen murder plots and attempts on his life in his time in the underworld dating back to his father’s heyday .

One of things the Feds are focusing on in trying to make a future case stick against Skinny Joey is his lifestyle, which appears to exceed his meager income earnings reported to the government – he lives in a luxury condo on the beach with his buddy Donnie Petullo and has been tooling around town in an Escalade, however nobody really knows how he is making his money. Currently he’s listed as an employee of a soon-to-be opened Italian restaurant in Boca Raton named after him and called “Merlino’s”

“How is he out in the sun in Boca, having the time of his life, if he’s got no way of generating any legitimate cash?” asked one source in the FBI. “It’s not ‘cause of his good looks.”

Merlino’s wife Debbie testified at last week’s hearing that she is a successful businesswoman and helps support her husband. Media outlets in Philadelphia and Florida last week reported that Joey’s main benefactor is Stan Stein, an aging Jewish Boca Raton real estate mogul, who is footing the bill for the restaurant, as well as paying for his travel arrangement to-and-from back home, where he is holed up in a posh suite in the glitzy Four Seasons Hotel.

Another way Merlino has allegedly lined his pockets lately is from selling his life-rights for a movie without any intention of actually helping the people he sold it to make a film, per people connected to the purchases.

Skinny Joey is reputed to have sold his cinematic life-rights, at least twice, possibly as many as three times, in the past couple of years to Hollywood-based producers, either naïve to or greedy enough to not care, about his notoriously slithery and slippery ways of doing business.

“That’s Joey being Joey, the whole thing is a giant shakedown,” said one of those familiar with the situation.