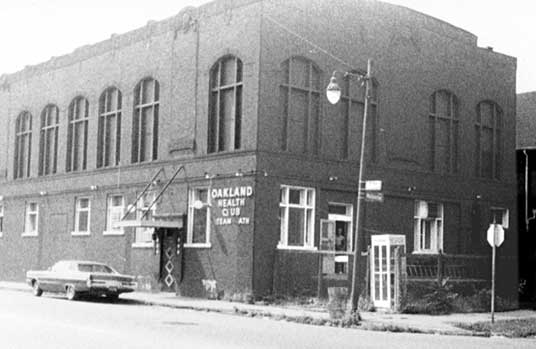 Detroit’s historic Oakland Avenue Bath House, better known as simply, “The Schvitz,” a set of steam rooms and swimming pools steeped in Motor City underworld tradition dating back almost a century, celebrated its’ 85th anniversary this year. The Eastern-European style bath house was opened for business in 1930 by the Purple Gang-staked Meltzer family and immediately became a frequent meeting spot for the Purples, (Motown’s notoriously murderous all-Jewish crime syndicate during the Prohibition Era), and then for members of the area’s Italian mafia in the years after that.

Mobsters, both Jewish and Italian, enjoyed using the steam-room facilities for highly-sensitive, top-secret discussions because of the assurance that the conversations couldn’t be recorded. The extreme heat and wet air in the steam rooms made it impossible for law enforcement to successfully install audio-surveillance equipment and the fact that everybody is either naked or in a towel allowed people to know the person they were talking to wasn’t wearing a wire.

Located at 8295 Oakland Avenue on the near eastside of Detroit, the Schvitz, originally called the Oakland Athletic Club, is still in operation today minus the mob element. The bathhouse has always been known for its’ excellent food, serving large, delicious spreads featuring freshly-prepared salads, sandwiches, pasta and bbq for its’ primarily male clientele. Since the 1970s, the Schvitz (Yiddish for the word “sweat,”) has hosted couples and swingers nights on the weekends.

The iconic Purple Gang, nationally recognized, feared and respected, was founded on Detroit’s eastside by the four Burnstein brothers (Abe, Joe, Ray and Izzy) in the early 1920s. The Burnstein boys and most of their soldiers were of Russian and Polish heritage, places where bath houses were popular, and got their start in the Oakland Sugar House Gang, which headquartered down the street from what eventually became the Schvitz. Rising from the Hastings Street ghetto, the Purples went on to rule large swaths of Michigan bootlegging territory in the late 1920s and early 1930s, forging critical and mutually-beneficial bonds with their Italian counterparts in the underworld and reportedly killing more than 500 people in its roughly decade-long gangland reign.

A Purple Gang associate named Charles Meltzer built the Schvitz in 1929, opened its’ doors in 1930 and when he retired handed over the keys to the shop to his son, Harold (Uncle Harry) Meltzer, who would run the bath house until he sold it 1977. Charles Meltzer’s nephew was Harold (Chinky) Meltzer, a part of what was called “The Junior Purples” or “JV Purples,” a group of young-pup wiseguys that learned the rackets from the core Purple Gangsters themselves and carried on in some loose configuration after the first-wave of Purples disbanded in around 1935.

Chinky Meltzer ran a big bookmaking business out of the Schvitz until he was imprisoned in the 1950s for his role in a counterfeit money scam. According to FBI documents from the 1970s, upon Meltzer’s incarceration, Detroit mob associate and Jewish underworld figure, Charles (Chickie) Sherman, took over the sports-gambling racket being conducted at the bath house. Sherman and his bookmaking partner and fellow Jewish hood and mafia associate Sol (Good Looking Solly) Shindel, plied their trade at the Anchor Bar downtown and were mentored by several of the Junior Purples. They reported directly to the Giacalone brothers, Anthony (Tony Jack) Giacalone and Vito (Billy Jack) Giacalone, the Detroit mob’s longtime street bosses and responsible for the crime family’s Jewish racketeers, drug dealers and bookies.

Shindel was slain in December 1971, allegedly at the Giacalones’ behest for stealing from them, in the months after he and Sherman were indicted on federal gambling charges together. Both Giacalone brothers are still considered two of the prime suspects in the infamous July 1975 disappearance and murder of former Teamsters union boss Jimmy Hoffa.

The ascent of the pitbull-spirited Hoffa up the ranks of the organized labor movement, per testimony in front of the U.S. Senate, was aided by using members of the Purple Gang, Junior Purples and Italian mafia as muscle. One of Hoffa’s main Purple contacts was Joseph (Monkey Joe) Holtzman, a known “Schvitzer” in his day, along with Hoffa himself. Hoffa would sometimes dispatch Chinky Meltzer for intimidation purposes, according to the 1952 Senate testimony.

Per Michigan State Police records, the Giacalones liked using the Schvitz ‘s steam rooms as a place to pass on important information to their underlings, especially Billy Jack, who spent more time there than his older, less affable brother did. Particularly worried about the government listening in on his affairs, the younger Giacalone went to great lengths to ensure privacy while chatting about illegal endeavors. Besides holding get-togethers with his troops at the Schvitz, Billy Jack frequently summoned his men to meet him in the freezing-cold meat lockers at his Eastern Market Farm Fresh Produce warehouse, where the arctic climate, just like at the Schvitz, prevented government surveillance techniques from operating properly – despite all the precautions, Billy Jack would get bit by the FBI’s bugging of the trees and lampposts outside Farm Fresh where he would hold “walk-and-talks.”

Tony Jack died in 2001, stricken with cancer and failure of the kidney. Billy Jack passed away from natural causes in 2012, having risen to syndicate underboss in the latter years of his life following his brother’s death. Little Lenny Schultz died in Florida in the fall of 2013 at nearly 95 years old.

The Purple Gang’s old headquarters, the Book Cadillac Hotel on Washington Street in downtown Detroit, has been remodeled and reopened in the past decade. Abe Burnstein, Detroit’s lone Jewish Godfather, lived in the penthouse suite at the Book Cadillac for more than 40 years. Burnstein was close to Motown mafia dons and “founding fathers” William (Black Bill) Tocco and Joseph (Joe Uno) Zerilli and acted in an advisory capacity to them in the years after the Purples shuttered their activity and ceded territory to the Italians. Tocco and Zerilli, according to FBI files from the 1960s, would meet Burnstein at the Schvitz for lunch, sauna and counsel, starting during the Prohibition days and lasting up until Burnstein died of natural causes in 1968.