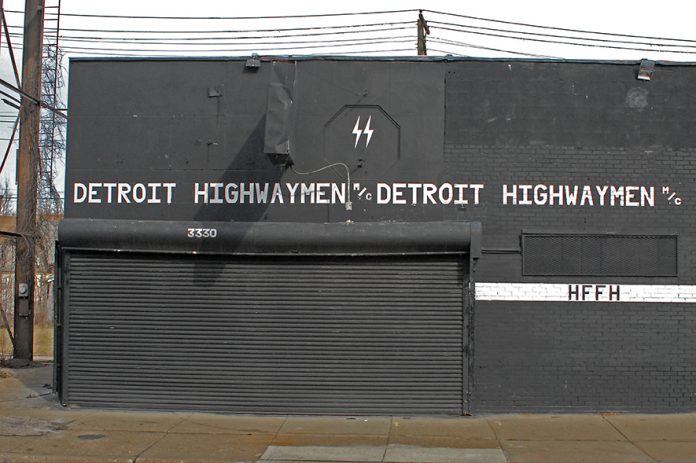 December 23, 2021 — The Detroit Highwaymen Motorcycle Club might be on the verge of eviction from its “Mother Ship” headquarters on the city’s near Southwest side. The Highwaymen MC is the largest and oldest biker gang in Michigan and has been based on the Southwest side of Detroit for its entire history dating back to the late 1950s.

The current clubhouse is actually three buildings connected together off Michigan Avenue, one of which, according to recently court filings in Wayne County Circuit Court, doesn’t belong to them. It belongs to local real estate developer Milton Hall. The club has used the building for the past ten years without paying rent.

Hall bought building located on the 3300 block of Michigan Avenue in 2007 for less than $2,000. He’s tried evicting the club from the premises since 2016 to no avail. The Detroit News was the first media outlet to report on the issue in its Wednesday editio

Highwaymen MC lawyer Bryon Kelley claims the issue is due to mistaken property records. Kelley admitted “discrepancies in the deeds” to the three separate properties and requested the county or the court undertake a survey of the documents and the land to determine who owns what. Members of the Highwaymen’s Mother Chapter own the other two buildings in question. The two parties are scheduled to be back in court on the matter on February 23, 2022.

Highwaymen MC boss Leonard (Big Daddy) Moore was let out of a life prison sentence last year because of COVID-19. The 73-year old Moore is back living in the area on home confinement.

Besides Moore returning to town in 2020, the club was in the news for unrest within the ranks; Highwaymen member Thomas (Crazy Tom) Curry murdered another Highwaymen, Ron (Greedy) Davies, and two others and then set Davies house on fire to try and cover up the triple homicide in the summer of 2020. Curry, 38, committed suicide after a two-day standoff with authorities in September where he took two hostages and barricaded himself in a Northwest Detroit residence.