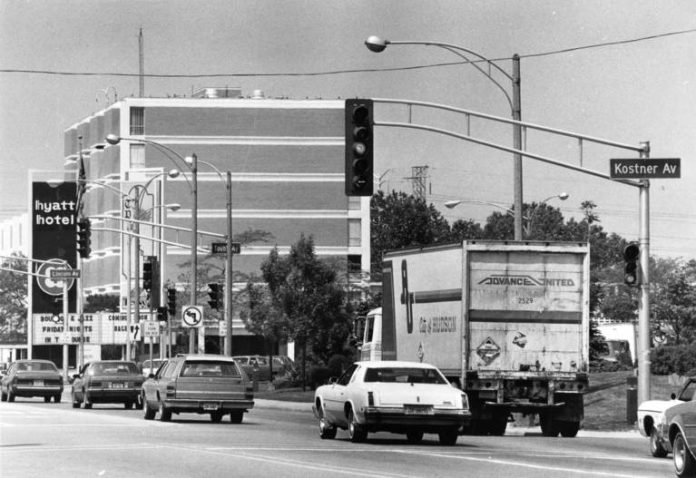 August 30, 2022 — Real estate developers in Chicago broke ground last week on the old site of the Lincolnwood Hyatt or “Purple Hotel,” as it was known in later years, in a mixed-use construction project that will feature residential living, restaurants and an Amazon store. The development is being called District 1860 in honor of the year the U.S. President Abraham Lincoln, an Illinois native and the man the city of Lincolnwood was named after, was elected.

The hotel hasn’t been operational in 15 years and had a notorious history. On January 20, 1983, Chicago mob associate Allen Dorfman was gunned down in the parking lot by an Outfit hit team to prevent him from potentially cooperating with authorities in a bribery case he was about to go to prison for.

The 60-year old Dorfman was an insurance mogul and World War II hero responsible for overseeing the robust and incredibly corrupt Teamsters union pension fund. His slaying was depicted in the 1995 film Casino, with comedian Alan King portraying Dorfman as a character named “Andy Stone.” Dorfman was shot to death leaving a lunch meeting at the Lincolnwood Hyatt’s Tessy’s Restaurant alongside Outfit associate and bail bondsmen Irwin (Red) Weiner in the hotel’s parking lot by a pair of masked assailants with silencer-equipped weapons

Witnesses described one of the masked assailants hollering, “This is a robbery,” and the other immediately opening fire on Dorfman with a 22-caliber pistol, striking him several times in the head and neck. Emergency medical technicians pronounced him dead on the sc

The two hitmen fled on foot to a waiting getaway car and sped off. A few blocks down the road, the killers abandoned the original getaway car and got into yet another waiting vehicle. The gun that fired the fatal shots was recovered inside a dumpster bin on the grounds of nearby St. Cornelius Elementary School.

Then Chicago mob captain Joseph (Joey the Clown) Lombardo was convicted in the bribery case with Dorfman. Lombardo, who would eventually rise to be the Outfit’s consigliere, was known in underworld circles as Dorfman’s protector. He was a suspect in several gangland murders and died in prison in 2019 of throat cancer serving time for the 1974 slaying of mob associate Danny Siefert, a plastics manufacturer on the verge of testifying against Lombardo, Dorfman and Weiner in an upcoming Teamsters pension-fund fraud case. The case was dropped following Seifert’s homicide.

According FBI records, there were two different getaway cars used in the Dorfman hit: a silver-colored Cadillac stolen from Chicago’s Chinatown neighborhood months earlier and a green-colored Dodge sedan. The killers allegedly followed Dorfman and Weiner from Dorfman’s office to the Lincolnwood Hyatt in the Dodge.

Several members of Lombardo’s Westside crew were suspects in the murder, but nobody has ever been brought up on charges. A composite sketch of one of the triggermen based on an eye-witness description resembles Albert (Albie the Falcon) Vena, the reputed boss of the Westside crew today. Vena, who has beaten two murder raps in his Outfit career, remains a suspect in Dorfman’s slaying.

The hotel seemed to be cursed in the years after Dorfman was killed there. In the late 1980s and 1990s, it became known for seedy sex parties and as a hangout for swingers. When the Hyatt naming rights were deemed too pricey, the owners rebranded the building as The Purple Hotel due to its unique color of brick. The Purple Hotel shut its doors in 2007.