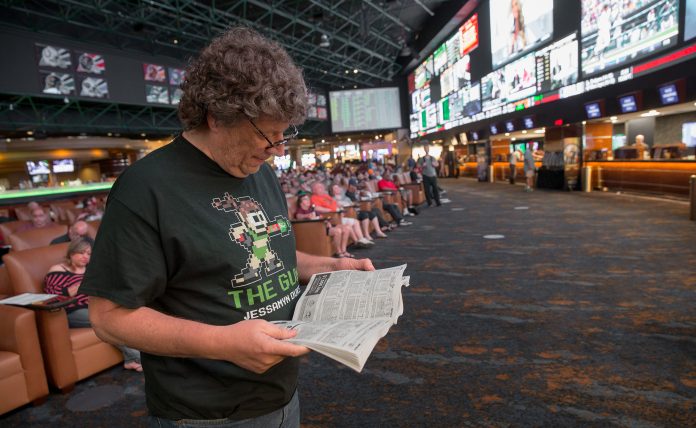 The Queens, New York native had become a titan in the Las Vegas gambling space over the past three decades, known for his handicapping skills, appearances in the World Series of Poker and his signature fluffy mane of hair. Since the advent of social media, Denkenson was a well-known presence on “tout” shows and sports-gambling talk outlets in the media

Dinky Denkenson was indicted on federal bookmaking charges in 1991 in a case out of Detroit targeting the notorious Giacalone mafia crew. According to the indictment, Denkenson was the Giacalones layoff man in New York City and the crew’s liaison to the Gambino crime family.

Denkenson pleaded guilty in the case and did two years in prison. After his release in 1993, he relocated to Las Vegas and “off-shore” in the Caribbean isl

Denkenson was such a unique, colorful personality and his life such a whirlwind, the 2012 Hollywood film Lay The Favorite is a dramatization of him based on a memoir penned by his one-time personal assistant. The Weinstein Company produced the film helmed by British director Stephen Frears. In the movie, Bruce Willis plays a character named “Dink” Heimowitz.

“The real Dink was a true character,” retired FBI agent Mike Carone recalled. “His knack for that business (gambling) and for being able to make money for himself and a variety of other people, obviously took him far. I didn’t know about the movie until recently, but it makes sense. The guys he was doing work for in Detroit were top brass. These were very serious people and he was there man out east. He took the case, did his time and did the smart thing, moved to a place where gambling was legal. People liked him, he was sharp and he leveraged it for his business in Vegas.”

The No. 1 and No. 2 defendants in Denkenson’s ’91 felony case were Vito (Billy Jack) Giacalone and his son, Jack (Jackie the Kid) Giacalone. Billy Giacalone (d. 2012) was a longtime power in Detroit’s Tocco-Zerilli crime family and was one of the top suspects in the 1975 disappearance and murder of Teamsters boss Jimmy Hoffa. Jackie Giacalone, 72, is allegedly the don of the Detroit mafia today, per sources.

Denkenson’s contact in Motown was Allen (The General) Hilf, Jackie Giacalone’s best friend, main adviser and the biggest bookie in the state of Michigan for 40 years. Hilf died of a kidney disorder in 2014.