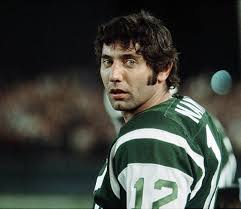 There has long been a connection between organized crime and the NFL, especially in the league’s early-to-middle-aged eras.

Much of this corruption and alleged corruption was chronicled in a bold, ground-breaking book by expert investigative reporter and true-crime author Dan Moldea called “Interference,”  released in 1989 by the William Morrow publishing company and celebrating its’ 25th anniversary this year.

The Green Packers’ Hornung and the Detroit Lions’ Karras were suspended for the entire 1963 seasons for betting on pro football and cavorting with known mob figures. Hornung was a Hall of Fame running back, while Karras was an All-Pro defensive lineman, who went on to have a successful career as an actor in Hollywood following retirement.

Namath, one of the most high-profile quarterbacks in NFL history when he played with the New York Jets in the 1960s and 1970s, and Karras, were both forced to sell their interests in bars they owned in the respective cities they played in because of the “hoodlum element” that patronized the establishments.

Hall of Fame field generals Layne and Dawson were both investigated by the league for manipulating outcomes of games, each tied to Detroit mob associate and nationwide gambling czar Donald (Donnie Dice) Dawson – no relation to Len. Layne took Detroit to multiple NFL championships and Dawson led the Kansas City Chiefs to the 1970 Super Bowl.

On more than one occasion throughout their time with the Lions, Layne and Karras gave sideline passes for regular season and playoff games to infamous Detroit mobsters Anthony  (Tony Jack) Giacalone, Vito (Billy Jack) Giacalone, Anthony (Tony Z) Zerilli and Michael (Big Mike) Polizzi. The FBI wound up taking the wiseguys into the Bureau’s Miami office to interview them about their relationship to the team and their players following a game played in Florida.

In addition to his bar ownership being investigated and censured, Karras had his and some of his teammates’ traveling companions to-and-from games come under scrutiny by NFL officials. Karras, Wayne Walker, Darris McCord, Howard (Hop-along) Cassidy and John Gordy were known to drive to and from away contests in a mafia-owned “Party bus” – a double-decker bus adorned with female escorts and gambling tables that dropped from the ceilings. The party bus excursions were cited by the NFL as part of why Karras was suspended in 1963.

Murchison, the founder of the Cowboys’ franchise, was pals with Dallas Mafiosi Joe Campisi and held joint business interests with New York mobsters Vito Genovese (Don of the crime family that bears his name) and Gerry Catena. Modell ran in social circles in Ohio that included Cleveland Jewish racketeers like Alex (Shondor) Birns and Italian mafia powers like Louis (Babe) Triscaro. Hailing from heavily mobbed-up Youngstown, Ohio, DeBartolo has been connected to the gangster Carrabia brothers (Charlie the Crab, Ronnie the Crab and Orlie the Crab) of the Cleveland mafia and Vincent (Briar Hill Jimmy) Prato, Joseph (Little Joey) Naples and Pat Ferrucio of the Steel City mafia family. Rosenbloom, a heavy bettor, died in a mysterious drowning in April 1979.

Los Angeles Goodfella and future acting boss of the Dragna syndicate Altadena (Jimmy the Weasel) Frattiano admitted to fixing a 1951 L.A. Rams game. Dice Dawson accused Bobby Layne of fixing at least seven games for him in the 1950s, one of them being the final game of the 1956 regular season versus the Chicago Bears for the division championship, where the underdog Bears beat favored Detroit. Layne asked out of the game in the second quarter and never returned.

NFL security and the FBI suspected that at least 10 games were “fixed” during the 1979 campaign and nine NFL teams in the 1980s had players investigated by league security for their alleged association with gamblers and members of the mafia – the Cleveland Browns, Dallas Cowboys, Denver Broncos, Washington Redskins, New England Patriots, New Orleans Saints, San Diego Chargers, Miami Dolphins and San Francisco 49ers.

The Saints had 10 players on their 1981 roster come under scrutiny for running with mob-funded bookies and drug dealers in the Big Easy. The ’81 squad was plagued with narcotics issues – several players eventually nailed by the NFL with drug suspensions, including former Heisman Trophy-winner George Rogers out of South Carolina.

All-pro wide receiver Irving Fryar, the No. 1 pick in the 1984 NFL Draft for the New England Patriots, was investigated by the league for drugs, gambling, associating with known-criminals and game-fixing. The NCAA investigated him for possibly intentionally dropping a touchdown pass in the 1984 Rose Bowl while he was playing in college for Nebraska. Fryar is currently facing mortgage fraud charges in his home state of New Jersey.