On August 4, in Trinchi’s Restaurant in Yonkers, the first of the mob’s meetings took place. Despite the fact that it was held in public on a busy Friday night, it was not until months later that the New York City police found out that it had taken place. (Inexplicably, the NYPD, to the mob’s delight, has decided to cut back the kind of surveillance work needed to fight or-ganized crime.) The FBI had apparently missed the meeting as well, and, if it had not been for an IRS agent in starch of an acquaintance of one of those who attended the meeting, no law enforcement unit would have known of the meeting.

Those attending included Carmine Tramunti, acting head of the Lucchese family, long known for its drug operations. Based in East Harlem, it had a virtual monopoly in supplying drugs to black and Puerto Rican ghettos before the Mafia-imposed ban. While Tramunti has no personal involvement with narcotics (his interests are almost exclusively gambling), as the family’s titular head his approval was not only expected but required.

Philip Rastelli, acting boss of the Bonanno family, was also present. The Bonannos have been well known as a drug family since the early 1930s. when Joseph Bonanno first put the Sicily-Marseilles-Montreal-New York route together. The Bonanno Mafia family has always been evenly divided between Montreal and New York, and it has specialized in smuggling of all kinds. Rastelli. who has taken over the Bo-nanno mob and moved into a racket vacuum in Ncw jersey, is expected to be the first Mafia boss to make a move in solidifying the drug business. Bonanno soldiers, perhaps more than those of any other family, have been most debilitated by internal wars, jail, and a loss of illicit income. Bookmaking, loanshark concessions, labor union infiltration, waterfront pilfering franchises—all of the fringe benefits and income that accompany a thriving Mafia family—were denied the Bonanno crew as a result of their leadership vacuum after Joseph Bonanno was kidnapped and his heir was rejected by the Mafia’s commission. As a result, it is the remnants of the old Bonanno family who are most in need of the drug trade, and it will therefore fall to Rastelli in New Jersey to take on the well•organized and deeply entrenched Cuban gangs. He is expected to go about it, according to various police informants, by systematically killing off top Cuban importers until eventually the entire Cuban operation is under control. 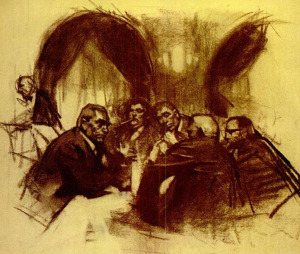 With Rastelli at all of the meetings was another Bonanno boss. Natale Evola, an older and highly respected don. It is Evola who often serves as a voice of moderation when Rastelli, who has a volatile nature, explodes. Also present at the meeting was Michael Papa, the 24-year-old nephew of Vincent Papa, the Lucchese family associate arrested last February with the cash-filled green suitcase. It is suspected that Michael, who was on bail at the time of the dinner, was representing his uncle’s interests. The last and most mysterious of the Mafia dinner companions was Francesco Salamone, an illegal Sicilian alien who has a long history of international narcotics smuggling and many Corsican friends.

A second meeting took place on August 11, the day after the two Manfredi nephews were shot and killed and it was held at the Staten Island home of of John (Johnny Dec) D’Alessio, a Carlo Gambino captain. At this meeting. Evola, Rastelli and Salamone, their European connection, apparently presented their plans to the bosses and acting bosses of other Mafia families. Present were acting Genovese boss Alphonse (Funzi) Tieri; septuagenarian, gum-chewing Michele Miranda, a highly respected Genovese family consigliere; Aniello DellaCroce, Carlo Gambino’s most likely successor; Alphonse (Allic Boy) Persico, representing his brother Carmine (Junior) Persico,  a Colombo family captain, and Joseph N. Gallo, a man unrelated to the Brooklyn Gallos, who often represents the interests of the New Orleans and Tampa Mafia families in New York. (Trafficante and Marcello both refused to attend the meetings, according to police, since their last dinner with friends in New York resulted in their seizure in La Stella Restaurant on Queens Boulevard.)

Gallo’s presence at the meeting, therefore, was significant since it is through the Far-Eastern connections established by the bosses of the two southern Mafia families that so much of the heroin brought into the United States originates. Also attending the second meeting was Luciano Leggio—another illegal Sicilian alien wanted for murder in Palermo and an old-world Mafioso with excellent Corsican connections. The third meeting, at which Evola and Rastelli once again presided, is expected to be the last. It took place on August 17 in Gargiulo’s Restaurant on West 15th Street off Mermaid Avenue, in Coney Island. The acting Genovese boss, Alphonse Tieri, and the new Lucchese boss Carmine Tramunti,  were present, as was Joseph N. Gallo. The five men met on a Thursday evening and sat down to dinner unnoticed by the rest of the customers. They were, after all, five neatly dressed, soft spoken businessmen who were discussing. with varying degrees of enthusiasm, the problems inherent in any new business venture.