In the drug business, there is very little exposure and thus a minimum of vulnerability. In addition, there are now very few hoods around who do not know how easy it can be to smuggle contraband into the United States. Along the 1200-mile Canadian border between Erie. Pennsylvania. and the Maine coast, for instance, there are two Great Lakes (Eric and Ontario). Niagara Falls, Lake Champlain, the St. Lawrence Seaway, scores of small waterways, 100 unguarded bor-der roads and 1,000 rural airstrips upon which a small plane can land unde-tected. This entire stretch is patrolled by 100 border guards, with never more than twenty of them on duty at one time.

Just as the Mafiosi had replaced the Jewish racketeers who controlled the narcotics business before the end of World War II (“smack” as slang for heroin is derived from the Yiddish word schmeck or smell), a loose amalgam of multi-racial and multi-ethnic entrepreneurs took the Italians’ place in the early sixties. Blacks, Puerto Ricans, Cubans, Argentinians, Brazilians and, lately, Chinese distributors moved in on the wholesale and importation level. Independent black junk dealers like Julian St. Harrison, Gerald Hanley, Leroy Barnes. and Robert Stepney have developed their own Latin-American connections.

Harrison, at 53. is known to police as a ten-kilo man who specializes in supplying out-of-towners from his East 215th Street headquarters in the Bronx. Hartley and Barnes are both considered major traffickers, Barnes having been a front for the East Harlem Mafiosi before they got out. Stepney, who police say commutes from Teaneck, New Jersey, to Bedford•Stuyvesant every day, is another of the city’s top dealers.

The money being made by black racketeers in narcotics, of course, is finding its way into other illegitimate enterprises. Blacks are not only run-ning their own policy and loanshark operations in areas that were once Ma-fia controlled, but they have begun moving into legitimate businesses as well. Bar-and-grills, drycleaning shops, liquor stores, even ghetto tenements are being swallowed up by black rack-eteers in payment for gambling and loanshark debts, a pattern of upward criminal mobility ominously familiar to the Mafiosi themselves. 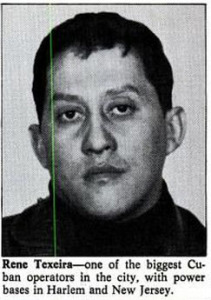 One of the biggest Cuban operators in the city today is Rene Texcira, who lives in the Bronx but controls, along with Regilio Fernandez, another Cuban, most of the trafficking in northern Manhattan and New Jersey. The Mafia’s greatest problem in retaking their netherworld interests will undoubtedly come from the Cuban racketeers. In West New York, Union City and Hoboken, New Jersey. as well as Washington Heights and much of upper Manhattan, junk has been controlled by Cuban gangs since the Mafia families of Simone Rizzo (Sam the Plumber) De-Cavalcante and Joseph (Bayonne Joe) Zicarelli were decimated by continuous Federal harassment and jail. The Cubans, meanwhile—some with a para-military training left over from their Batista, anti-guerrilla days—have become a powerful criminal group as well organized, some say, as the Mafia itself.

Cubans’ greatest enemies at present, however, are the city’s Puerto Rican racketeers, who are in direct competition for the Latin junk market and for gambling and loan-shark operations. On Manhattan’s Upper West Side, with his base of operation around Broadway and 110th Street, Anthony Angelet, a 54-year-old Puerto Rican racket boss, is holding the fort for Raymond (Spanish Raymond) Marquez, who is in jail.

Lionel Gonzalez. another of the city’s powerful Puerto Rican dealers, concentrates his activities in the South Bronx, more specifically from his headquarters along Southern Boulevard between 149th and 150th Streets.

In Brooklyn. the top Puerto Rican dealer has been identified as Jose Rosa, whose connections along Fourth Avenue in South Brooklyn are as good as his connections on the island of Puerto Rico. He is, in fact, the island’s key supplier.

These top dealers arc so care-fully insulated from their day-to-day operations that it is extremely difficult, despite almost daily harassment and questioning by the police, to land any of these men in court. Further complicating the Mafia’s takeover plans arc the Chinese.  Ten years ago, when the Italian-American Mafiosi left Junk City, the main suppliers were Sicilian, French and Corsican. By controlling these suppliers, the Mafiosi controlled the amount of drugs that entered the United States.

During the middle sixties, however, increasing numbers of Chinese seamen began jumping ship in the United States with as much as ten kilos of heroin strapped to their backs. Suddenly, the poppy farms of Turkey, the smuggling routes through Sicily and Corsica. and the refineries in Marseilles were no longer the only sources. To-day, it is estimated that more than half the heroin used in the United States comes from the Far East, much of it smuggled into the country by ship-jumping Chinese seamen. Customs and immigration officials say it is impossible to deal with the problem effectively. The relaxation of immigration rules has recently filled America’s Chinatowns with new inhabitants, and it is comparatively simple for a seaman with $50,- 000 worth of pure heroin to disappear in these communities. On April II, seven Chinese were arrested in New York with eleven pounds of heroin, and six of the seven turned out to be ship-jumpers. The heroin was part of a 100-pound batch brought into the country by a European diplomat. On June 30, four Chinese were arrested in a Sunny-side. Queens, apartment trying to ex-tricate eighteen pounds of heroin from behind a baseboard where two other Chinese had hidden it earlier in the year at the time of their arrest. And, on August 21, as the godfathers made up their minds to get back into the junk business, Federal agents arrested 60- year-old Kan Kit Huie, the unofficial mayor of Chinatown, in a $200,000 deal involving twenty pounds of heroin, two Chinese businessmen, a Chinese ship-jumper, two Chinese-American un-dercover cops. 40 Federal agents using twelve unmarked cars and a seven-hour circuitous tour led by cautious Huie that took the entire entourage through the alleys, factory buildings and streets of the Lower East Side.