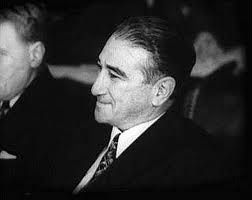 1 (tie) Abner (Longy) Zwillman – The Garden State’s most high-profile gangster of the first half of the 20th Century, Zwillman, Jewish, fearless and very deadly in his heyday, was found hanged in his West Orange mansion on February 27, 1959, on the verge of testifying in front of the McClellan Senate Hearings on organized crime. Officially ruled a suicide, the man called “The Al Capone of New Jersey” during Prohibition had marks on his wrists that show he had been tied up prior to his hanging. Fellow Jewish mob czar Meyer Lansky and New York Italian don Vito Genovese saw Zwillman as a weak link to the mafia’s National Commission with him facing the Senate committee and a major federal tax case.

1 (tie)  Stefano Badami – Longtime boss of the New Jersey mob, Badami got into a dispute with his top two lieutenants, Phil Amari and Nick Delmore, who are alleged to have ordered his murder on March 31, 1955. Sitting on the throne for 30 years, Badami founded the Elizabeth-based crime family during Prohibition and lead the syndicate’s takeover of Newark.

2 John (Johnny Boy) D’Amato – Boss of the New Jersey mafia and a close friend of New York “Dapper Don” John Gotti, D’Amato disappeared on January 6, 1992 after being “outed” as a homosexual by a girlfriend. D’Amato took over the crime family’s top seat in an acting capacity when Godfather John (The Eagle) Riggi and his underboss Gaetano (Corky) Vastola went to prison. Riggi’s consigliere Stefano (Stevie the Truck Driver) Vitabile and syndicate capos Giuseppe (Pino) Shiffilitti and Phil Abramo were each convicted for Johnny Boy D’Amato’s murder, despite his body never being discovered. His story served as inspiration for a story arc on The Sopranos hit television show.

3 Louis (Fat Louie) LaRasso – The underboss to legendary New Jersey don Sam (The Plumber) DeCalvacante, LaRasso was demoted upon his mentor DeCalvacante’s retirement and killed on October 21, 1991 because he was perceived as a threat to boss John Riggi and his street proxy Johnny D’Amato with Riggi behind bars. Lured to his slaughter by future acting boss Vincent (Vinnie Ocean) Palermo, La Rasso was shot to death by an assassin squad consisting of Anthony Capo, Greg Rago and Louis (Louie Eggs) Consalvo, all getting their “buttons” for their job well done. Capo would turn government witness and Rago, Louie Eggs, Stevie the Truck Driver Vitabile, Pino Shifilitti and Phil Abramo all went down for Fat Louie LaRasso’s murder, which took place the day of his 65th birthday party.

4 Vincent (Jimmy the Gent) Rotundo – New Jersey Godfather John Riggi’s first underboss, Jimmy the Gent got clipped on January 4, 1988, dying in a hail of bullets in his car parked on the curb outside his Brooklyn residence, only months after introducing a federal informant to made guys in both New Jersey and New York, including members of John Gotti’s Gambino Family. Rotundo’s killers left a dead fish on his lap. Jimmy the Gent’s son, Anthony, also a button man in the New Jersey mafia, and eventually turned informant himself.

5 (tie) Anthony (Little Pussy) Russo – The Genovese Family solider stationed in New Jersey, Russo was shot three times in the back of the head inside his luxury apartment in Long Branch on April 26, 1979 and left dead in a pool of blood atop of his collection of stuffed-animal cats, which he collected due to his nickname that he earned as a young cat burglar on the Jersey Shore in the 1950s. Killed for his notorious loose lips, Russo and his older brother John (Big Pussy) Russo were the inspirations for the Salvatore (Big Pussy) Bompenserio character on the hit tv show, The Sopranos. In the days following his murder, Genovese NJ capo Ruggerio (Richie the Boot) Boiardo told people, “It’s for the best, Little Pussy had a big mouth.

5 (tie) Joseph (Joe the Nodder) Sodano – The Philadelphia mob’s New Jersey capo headquartered out of Newwark, Sodano refused to get in-line under the newly-minted administration of Ralph Natale and Joseph (Skinny Joey) Merlino during the mid-1990s and paid with his life, found with two gun-shot wounds to the head, slumped behind the wheel of a van in a retirement community on December 7, 1996. Sodano’s second-in-command Peter (Pete the Crumb) Caprio had been eyeing Joe the Nodder’s capo slot for some time, starting with the murder of his bodyguard William (Crazy Willie) Ganz in 1994 and concluding with him triumphantly taking and fulfilling the contract on Sodano two years later. Natale and Caprio, who celebrated together in the aftermath of the bloodletting at a ceremonial dinner, both turned federal informant and entered the Witness Protection Program.