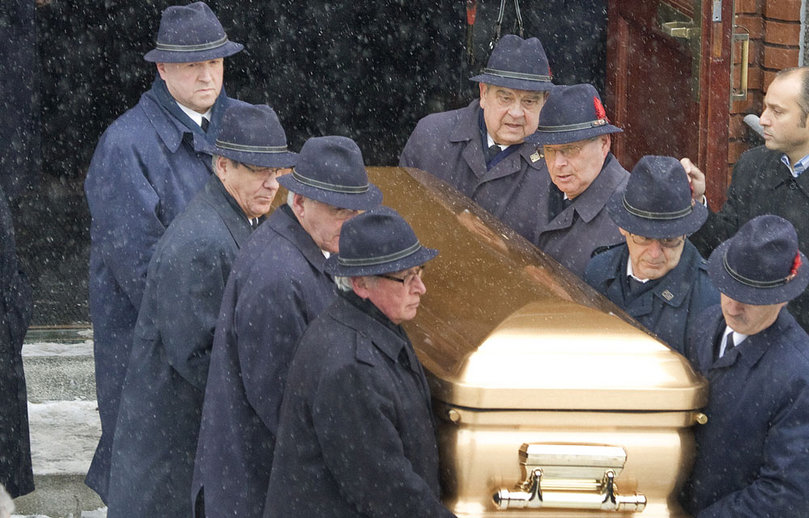 The Rizzuto family is a crime syndicate based in Montreal, Quebec. The family territory covers most of southern Quebec and Ontario.[1] The FBI considers the family to be connected to the Bonanno crime family,[1]but Canadian law enforcement considers it to be a separate crime family. The Rizzuto family was part of the powerful Montreal Cotroni decina until an internal war broke out and the Rizzutos formed their own organization.

n the 1970s an internal war broke out in the Cotroni crime family between the Sicilian and Calabrian factions.[2]The Sicilian faction was led by Nicolo Rizzuto and the Calabrian faction was led by family boss Vic Cotronithrough his right-hand man Paolo Violi. This led to a violent Mafia war in Montreal leading to the deaths of Paolo Violi (who was acting capo and underboss for Vic Cotroni) and others in the late 1970s. The war ended when the Sicilian faction took control over the Montreal underworld with the blessing of the Bonanno crime family. Until recently, the family was considered the strongest crime family in Canada. Their leader was Vito Rizzuto, the son of Nicolo Rizzuto.[3][4]

Vito Rizzuto’s style of business was a striking contrast to flamboyant American mobsters like John Gotti. He remained at the top of Canada’s criminal underworld by keeping a low profile, working only with trusted people close to the family, and spreading the wealth around. He is credited with playing a major role in bringing a truce in the deadly war between the Hells Angels and the Rock Machine in Quebec. The Rizzutos worked with both Sicilian Mafia and Calabrian ‘Ndrangheta families, the Cuntrera-Caruana Mafia clan (which branched out from Sicily to Canada and South America), Colombian drug cartels, and the five Mafia families of New York, in particular the Bonannos and Gambinos. Rizzuto was the mediator who oversaw the peace with the Hells Angels, the Mafia, street gangs, Colombian cartels and the Irish mobs such as the West End Gang when the order of the day was co-operation.[4][5]

After consolidation of their power in the 1990s, the Rizzutos became over-exposed and over-extended. Vito Rizzuto was arrested in January 2004 for his involvement in the 1981 gangland killings of three rival Bonanno crime family captains (Alphonse Indelicato, Philip Giaccone and Dominick Trinchera) and was sentenced to ten years in May 2007.[6] In November 2006 the senior leadership of the criminal organization was hit by a police operation, dubbed Project Colisee. Among the 90 people arrested were Nicolo Rizzuto, father of Vito Rizzuto, Paolo Renda, Vito Rizzuto’s brother-in-law, and Francesco Arcadi.[7]

On December 28, 2009, Nick Rizzuto, Jr., son of Vito Rizzuto, was shot and killed near his car in Notre-Dame-de-Grâce, a borough in Montreal.[8][9] The killing of Nick, Jr. – the face of the organization on the street – illustrated the power vacuum within the upper ranks of Montreal organized crime.[10][11] Since the slaying of Vito Rizzuto’s son, the organisation suffered other major setbacks. Paolo Renda, Vito’s brother-in-law disappeared on May 20, 2010.[12] A month later Agostino Cuntrera, the presumed acting boss who is believed to have taken control of the family, was killed together with his bodyguard on June 30, 2010. After three decades of relative stability, the face of the city’s Mafia hierarchy is subject to a major management shuffle.[13][14] On November 10, 2010, Nicolo Rizzuto was killed at his residence in the Cartierville borough of Montreal with a single bullet from a sniper’s rifle punched through two layers of glass in the rear patio doors of his Montreal mansion.[15][16][17]

Members of the old Cotroni family are among the suspects for the murders of Rizzuto crime family members.[18] The Rizzutos have dominated organized crime activities in Montreal since its inception and now their weakened organization is being challenged for control of rackets in the area, most notably the drug trade.[19] It is unknown if the New York City families, historically aligned with the Rizzutos, are supporting or against the new leadership. Salvatore Montagna, the acting boss of the Bonanno family until his deportation to Canada in 2009, was believed to be attempting to reorganize both families under his control.If so, he was unsuccessful and was murdered in November 2011. Vito Rizzuto was released on October 6, 2012.On November 4, 2012 Rizzuto family associate Joseph Di Maulo was executed outside his Montreal home. Di Maulo’s brother-in-law Raynald Desjardins is currently awaiting trial for the murder of Salvatore Montagna.

On November 11, 2013, Moreno Gallo, a once-influential member of the crime family, was killed by a gunman inside an Italian restaurant in the Mexican city ofAcapulco, Guerrero. Though he was not as well known as other mobsters of the Rizzuto crime family, Gallo was nonetheless influential among the Montreal mafia rings. He had lived in Canada throughout the 1950s but was deported in January 2013 after the Canadian government formally accused him of murder and organized crime charges.

Vito Rizzuto was admitted to the Sacré Coeur Hospital overnight Saturday, December 21 to Sunday December 22, and then died on Monday, December 23, 2013.