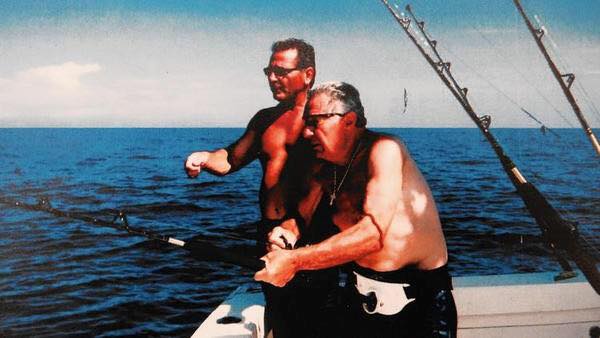 Top-ranking Chicago mob associate Michael (Mickey D) Davis is clearing his schedule, possibly for the next few decades. The 58-year old Davis, at times over the years a driver and bodyguard for Outfit heavyweights such as Salvatore (Solly D) DeLaurentis and Peter (Greedy Petey) DiFronzo, was found guilty last week in federal court of extortion, connected to his hiring a DeLaurentis lieutenant to break the legs of a debtor and could get a 40-year prison sentence.

The debtor, R.J. Serpico, the nephew of Melrose Park Mayor Ron Serpico, took out a street loan from Davis in late 2011 for $300,000 to open a car dealership. When by 2013 he had still failed to pay the money back, Davis reached out to an intermediary to retain Lake County gangster Paul Carparelli and cronies that worked for Carparelli to carry out an attack on Serpico that never wound up occurring due to one of Carparelli’s subordinates being an FBI informant.

“Solly D and Mickey D gave me $10,000 to throw this guy a beating,” said Carparelli to his wired-up underling.

Carparelli pled guilty to overseeing another extortion plot last month out of Lake County, the longtime stomping grounds of DeLaurentis, reputed “acting boss” of the Windy City mafia today. Serpico testified that he knew Davis to be friends with Solly D and would often see him chauffeuring Greedy Petey DiFronzo around town in DiFronzo’s Cadillac Escalade SUV. Mickey D threatened Serpico and his wife and children in a verbal confrontation that took place at used car lot in Melrose Park in January 2013.

Greedy Petey is a semi-retired capo in the Outfit’s Elmwood Park crew and longtime top advisor to his older brother, Chicago mob don John (Johnny No Nose) DiFronzo, the boss of the syndicate since the early 1990s said to be pretty much out of the day-to-day mafia game. Johnny No Nose’s name made it into testimony at the Davis trial as well.

Davis admitted being a social acquaintance of Solly D’s and knowing and being friends with the DiFronzo brothers for years, however denied working for them, insisting instead they were merely golfing and fishing partners (see feature image on a fishing boat in Costa Rice with Pete DiFronzo).

“Mickey D has a lot of trust with those guys, Johnny and Petey would use him to shuffle messages to Solly, he was one of the only people that didn’t have a button that had their ear like that,” said one strret source.

FBI and Chicago Crime Commission sources tell Gangster Report that Rudy (the Chin) Fratto is looking after the Elmwood Park crew on a daily basis for the DiFronzo brothers these days and DeLaurentis assumed control of the syndicate in an acting capacity two years ago.

Paul (Big Paulie) Corrado is on a roll. A few years ago, he got out of prison after serving more than a decade, mostly for the sins of others, proving he’s the last of dying breed in the mafia in the New Millennium – a genuine standup guy, who lives by the code of the oath he took and kept his mouth shut in a situation where many of similar ilk have folded like cheap suits.

Per insider sources, the 58-year old tride and true wiseguy recently got a bump-up to a capo’s seat and beat a cancer scare. Now, he’s got a brand new restaurant to brag about with his Goombah buddies. Back in the winter, Big Paulie Corrado and his cousin Mark, with additional alleged financial “backing” from reputed Detroit mob street boss Peter (Specs) Tocco, opened Dominic’s Italian Restaurant in Macomb County, off Jefferson Avenue.

Big Paulie and Tocco run the Italian-American Retirees Social Club together. According to sources on the Detroit’s “east side,”, the duo has been spending more and more time at Dominic’s, named after Big Paulie’s dad, deceased Motor City mafia capo Dominic (Fats) Corrado, and Michigan mob brass like boss Jack (Jackie the Kid) Giacalone, underboss Anthony (Chicago Tony) La Piana and consigliere Anthony (Tony Pal) Palazzolo, have all made appearances at the eatery since its’ opening in January. These sources call the 67-year old Tocco, “Big Paulie’s biggest cheerleader.” The pair are cousins.

The Corrado clan has a rich gangland heritage in Detroit. Big Paulie’s grandpa was Pietro (Machine Gun Pete) Corrado, a legendary presence in the area’s underworld of the first half of the 20th Century who led the crime family’s takeover of the city’s black policy racket in the late 1940s and died of a sudden heart attack in 1957. Machine Gun Pete was an original captain in the Family and following his death his crew was assigned to his sons, Big Paulie’s father, Fats Corrado and his uncle Anthony (Tony the Bull) Corrado.

Fats Corrado died of natural causes in 1985 and Big Paulie and Tony the Bull were both indicted in the infamous 1996 Operation GameTax, a federal legal assault that busted almost the entire Detroit mob administrative hierarchy. Tony the Bull died in prison in 2002, while Big Paulie, merely a foot soldier carrying out orders, didn’t see the light of day until 2010, having done 12 years behind bars while then-don Giacomo (Black Jack) Tocco did less than two and then-underboss Anthony (Tony Z) Zerilli served five.

Black Jack Tocco, Pete Tocco’s uncle, died in the summer of 2014. Tony Zerilli died this past spring. Jack Tocco’s retirement two-to-three years ago resulted in Pete Tocco’s “upping” to street boss after street boss Jack Giacalone became boss succeeding Black Jack, per sources. Big Paulie Corrado replaced Pete Tocco as capo of the long-standing Tocco crew, once headed respectively by Black Jack and his brother and Pete’s other uncle, Anthony (Tony T) Tocco (passed away in 2012), before they reached administration status. Pete Tocco is alleged to have taken the reins to the Tocco crew in the early 2000s when Tony Tocco was promoted to consigliere.