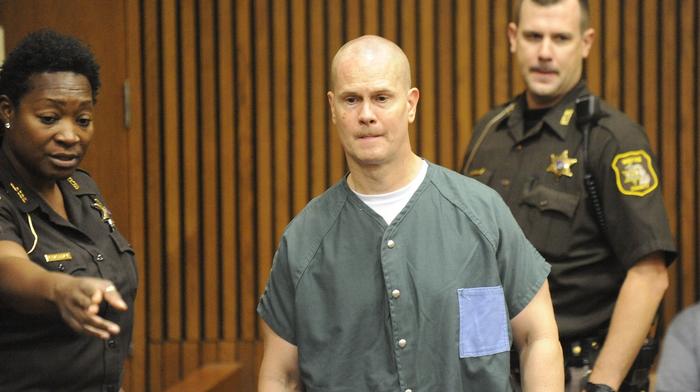 Several media outlets, including Gangster Report, inaccurately reported that at last week’s heavily-publicized parole hearing for former Detroit teenage drug dealer and illegal underage informant Richard (White Boy Rick) Wershe that Wershe admitted to stashing the eight kilos of cocaine he was convicted of possessing 30 years ago for the first time. In reality, Wershe told the parole board back in 2003 that he threw the box of drugs under an eastside home’s porch, referenced on Pg. 5 and Pg. 7 of a parole hearing transcript.

The soon-to-be 48 year old Wershe is the longest serving non-violent juvenile offender in the U.S. correctional system, imprisoned since January 1988 based on an arrest he took at a routine traffic stop when he was 17 in front of his grandmother’s residence on Hampshire Street on the far eastside of Detroit on May 22, 1987. Last Thursday was his first parole hearing in 13 years.

Wershe’s tragic, complex and utterly-enthralling case has attracted a worldwide audience in recent years, with a big-budget Hollywood film starring Oscar-winner Matthew McConaughey and newcomer Richie Merritt currently in production and a steady drum beat of media attention from outlets around the globe. In the summer of 1984, Wershe, at the time only 14 and fresh out of the eighth grade, was recruited by a federal narcotics task force to be a paid mole in the turbulent, primarily African-American Motor City dope game, specifically targeting an east side drug empire being run by Johnny (Lil’ Man) Curry, a suave and politically-connected kingpin who unknowingly took the charismatic mop-topped adolescent on as a protégé.

Wershe worked undercover for two years as a go-to intelligence source for the FBI, DEA and Detroit Police Department. The unholy relationship between the cocky, street-savvy teenager and Uncle Sam ended in the months before his arrest and once Wershe went off and began dealing drugs on his own. Curry, 59, was indicted in March of 1987 and did just under 14 years in prison.

Upon Wershe being stopped in a rented Thunderbird on May 22, 1987, police found a plastic grocery bag with $34,000 on the floorboard in the front seat and a fight for control of the bag ensued between two police officers, Wershe, his dad and sister, leading Wershe to bolt from the scene. During his circus-like 1988 trial, Wershe’s attorney argued that the drugs found were planted.

According to Wershe, he and his right-hand man Stephen (Freaky Steve) Roussell had received a shipment of 10 kilos from Miami earlier that day and stashed the shipment in Wershe’s grandmother’s house without her knowledge before removing them in the wake of the traffic stop and together running and ditching the box under a nearby house. Roussell’s fingerprints were on the box, while Wershe’s were not.

A neighbor named David (Peanut) Golly testified at Wershe’s trial that he saw Wershe bury the drugs, but recanted and signed an affidavit accusing members of the Detroit Police Department of coercing him to lie under oath with intimidation tactics. Roussell, 20, was slain that fall in a shooting over a girl.

At the time of his conviction, Wershe was sentenced to a mandatory life prison sentence under the now-defunct and highly-controversial “650 Lifer Law,” which was ruled unconstitutional and thrown off the books in 1998. Since the law was abolished, Wershe has been rejected by the parole board on three separate occasions. This week was his first parole hearing since March 2003.

The parole board is expected to give Wershe its decision in the next few months, possibly as early as late July or August. If freed by the state of Michigan, Wershe still has three years of time behind bars left to serve in Florida for the role in a stolen-car ring he pled guilty to from the Witness Protection Program in 2006 – Wershe entered witness protection in 1992 after reigniting his cooperation with the government and helping the FBI build successful prosecutions against a notorious ring of dirty cops and the infamous Best Friends drug gang, responsible for murdering Freaky Steve Roussell.

The one-time flashy baby-faced dope boy, now well into middle age, ready to celebrate his 48th birthday on July 18, assured the board he’s left his life of crime in the past.

“I can say with confidence I wouldn’t return to that life,” he said in a heartfelt exchange. “Drugs destroy communities, drugs destroy families, they destroyed my family…..I would never sell drugs again. I am as anti-drug as you can get, I’m as anti-drug as a prosecutor.”

“I let a lot of people down….let me show you I can make a difference in the world, do something positive,” he said. “All I can say is I give you my word as a man…everyday I try to be a better person from a bad place (prison). I am not the person I used to be. I can’t go back (and change the past), I can only go forward.”