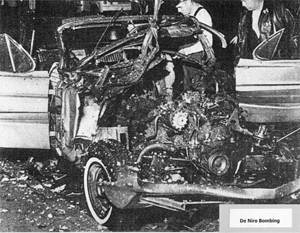 1 Charles (Cadillac Charlie) Cavallaro – The working-class mob town experienced it’s most notorious and gruesome mafia slaying when Cadillac Charlie and his 11-year old son Tommy were blown to pieces in a car bomb planted under Cadillac Charlie’s vehicle of choice in the Cavallaro family garage on November 23, 1962. It was the day after Thanksgiving and the 60-year old Cleveland mob capo in charge of the Youngstown rackets was set to drive his two sons, Tommy and Charlie, Jr, 12 at the time, to football practice. Charlie Jr. survived the blast, but needed to get his hip replaced, was hospitalized for three months and has to walk with a cane. In the 1950s, the popular Cavallaro went to war over control of gambling and policy lottery interests in Youngstown against the Naples brothers, Pittsburgh mob-backed wiseguys that ran their own rackets in the area. Cavallaro’s death brought the beginning of the end to a near-decade conflict that saw dozens of car-bomb murders blaze across the city’s bumpy gangland terrain in the mid-20th Century.

2 James (Vinnie D) DeNiro – A handsome and charismatic mobster, the 39-year old DeNiro, the gangland protégé of Cadillac Charlie Cavallaro and Cavallaro’s main muscle on the street, was slain in a car bombing outside his restaurant headquarters, Cicero’s, on July 17, 1961. The blast that killed DeNiro was so explosive that it took out the power and shattered the front-window glass of at least 20 nearby businesses, according to newspaper reports at the time of the crime.

3 Sandy Naples – The eldest of the three Naples brothers, Pittsburgh mob lieutenants stationed in Youngstown, Sandy was shotgunned to death alongside his girlfriend Mary Ann Vrancich on Vrancich’s front porch on March 11, 1960. Naples, 52, was out on a weekend furlough from prison where he was serving time for a gambling and racketeering conviction. Cadillac Charlie Cavallaro and Vinnie De Niro were considered the prime suspects in the brutal double homicide. DeNiro was questioned extensively by both local police and the FBI but was never charged.

4 Billy Naples – The middle Naples boy and Sandy’s successor as head of the Pittsburgh mafia faction, was killed on July 1, 1962, blown up in a car bomb while starting his car in his garage, just like Cadillac Charlie Cavallaro would be six months later. Billy was 35. The youngest Naples brother, “Little Joey” went to work for Vincent (Briar Hill Jimmy) Prato, the Pittsburgh mob’s new man in charge in Youngstown following his older brothers’ murders, until taking over as capo himself upon Prato’s death due to natural causes in 1988. Little Joey’s reign was short-lived though and concluded with him being assassinated via a sniper’s bullet in August of 1991 as he stood on construction property in rural Ohio where he was building a house.

5 Joe (Little Joe D) DeRose, Jr. – Considered the most-feared hit man working for the Pittsburgh mob’s Ohio rackets during the late-1970s and early-1980s, the 32-year old DeRose, Jr., son of mafia-backed labor union leader, Joe DeRose, Sr. (also slain gangland style) vanished from his girlfriend’s house on April 18, 1981. His car was found abandoned in rural Summit County, having been set aflame. Sam Fossesca would be convicted for the hit more than two decades later, although the body was never discovered. DeRose, Jr, a suspect in a number of mafia-connected murders at the time of his own death, was perceived as too loose of a cannon by Jimmy Prato and was beefing with Prato’s No. 2 in charge and eventual successor, Little Joey Naples. Elusive as he was deadly, De Rose, Jr dodged several attempts on his life before he finally went down for the count.