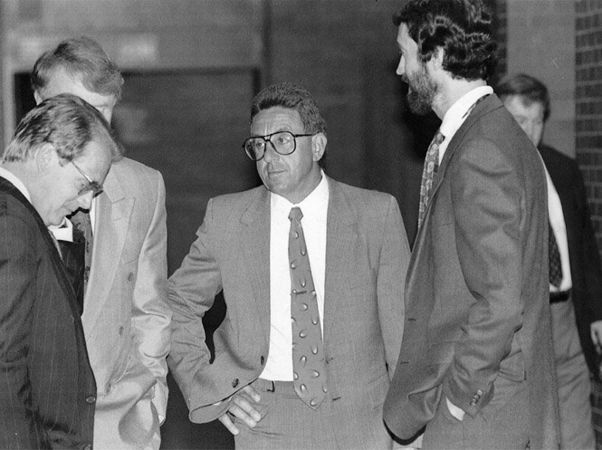 1 Adolfo (Big Al) Bruno – High-profile Springfield mobster that ran the Genovese Family’s rackets in Western Massachusetts and was a fixture in the local media for decades, Bruno was slain on November 23, 2003 while walking out of a weekly Sunday card game at his Our Lady of Mount Carmel Social Club by hit man Frankie Roche, hired by Bruno’s protégé Anthony (Bingy) Arrilotta. With growing anti-Bruno sentiment bubbling around the Genovese syndicate, Arrioltta took advantage and convinced the bosses in New York that his mentor should be removed, accusing him of cooperating with the FBI, and that he should take his place as capo of the region. Big Al was gregarious and camera-friendly, known for his loud wardrobe, jumbo cigars and a seemingly constant giant smile plastered across his face, whether facing attempted murder charges (which he did and beat in the 1990s) or out on the town, which he was frequently. Arrilotta turned government witness a few years later and gave up Roche as the shooter in the Bruno hit. Roche in turn joined Arrilotta on Team America and testified against the other co-conspirators in the murder plot, including Genovese street boss Arthur (Little Artie) Nigro, each of whom were convicted.

2 Joe Fiore – Springfield’s unofficial first modern-day mob don, Fiore married two-time Godfather’s widow, Pasqualina Sinischalini and inherited her past two husband’s robust bootlegging and racketeering empire, until he was shot dead on June 8, 1933. The year before Sinischalini, who lost her husband, Carlo Sinischalini, the city’s early-Prohibition underworld leader in a 1920 underworld coup and then saw his predecessor and her second husband Antonio Miranda die of blood poisoning, was killed gangland-style herself on November 12, 1932. The drive-by shooting that killed the lady mafia muse that was thought to be dabbling too much in the rackets for the liking of her male counterparts, wounded Fiore, himself a convicted attempted murderer and someone once arrested for stabbing a cop.

3 Antonio Facente – Ferocious wiseguy and mob hit man that was killed on March 29, 1979, two years following him being sprung from behind bars when he won a new trial on an initial headline-grabbing 1972 conviction for the gangland slaying of a Springfield business order that owed him money. Facente’s trussed, diaper-wearing corpse was found in the trunk of his Chrysler Cordoba in an area parking lot, tortured and shot six times. Informants told police in the aftermath of the murder, a young and up-and-coming Big Al Bruno boasted of carrying out the grisly slaying.

4 Victor DeCaro – The gangster son-in-law of then-Springfield Genovese captain, Francis (Frankie Skyball) Scibelli, DeCaro disappeared from his Agawam Lounge headquarters, his bound, battered and bullet-strewn corpse eventually discovered in the Connecticut River on July 3, 1972. Massachusetts State Police records indicate that Scibelli continually warned DeCaro about cheating on his daughter with the wife of another gangster to no avail and was forced to issue the contract at the orders of his mafia superiors in New York.

5 Gary Westerman – In the weeks leading up to Big Al Bruno’s murder, his protégé-turned-enemy Anthony (Bingy) Arrilotta did a little warm-up work, bludgeoning his brother-in-law and mob associate Gary Westerman to death on November 11, 2003 inside his Springfield home alongside fellow mobsters Emilio Fusco and the Geas brothers (Ty and Freddy). A convicted cocaine dealer and police informant, Westerman’s body wasn’t found until 2010 when Arillotta began working for the government.