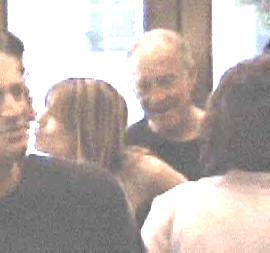 In the late 1990s and early 2000s, Donnie Shacks Montemarano was moving and shaking in LaLa Land, dating actress Elizabeth Hurley, paling around with actor James Caan and going on family trips with singer-turned-U.S. Congressman Sonny Bono. He was also spending a lot of time with the UCLA football team, resulting in the FBI opening an investigation into Donnie Shacks and some of the Bruins players for point shaving. No files were ever charged.

For decades, the 81-year old Montemarano was closely aligned with longtime Colombo boss Carmine (The Snake) Persico, representing Persico’s interests on the west coast. Persico ran the Colombos from behind bars, but died of natural causes in March 2019. There were unconfirmed rumors of Donnie Shacks being promoted to underboss at some point in his latter years.

The always-on-the-make Montemarano was busted for racketeering in New York in the 1980s. After serving a 10-year federal prison sentence, he reemerged in Los Angeles and settled in Beverly Hills. His wining and dining of UCLA All-American quarterback Cade McNown and some of his Bruins teammates throughout 1998 and the first half of 1999 drew the attention of the FBI. Informants told FBI agents that Donnie Shacks was having the players manipulate point spreads for him.

According to FBI records, chatter on court-authorized wiretaps in L.A. was that the “fix was in” for the November 7, 1998 game between UCLA and Oregon State. Undefeated UCLA, ranked No. 3 in the nation, was favored by 12 points, but failed to cover the spread, winning by sev

FBI agents tailed Donnie Shacks to New York on December 13, 1998 and followed him as he dined with McNown and McNown’s parents that evening and accompanied them to the Heisman Trophy Award ceremony at the New York Athletic Club the next day. McNown lost the award to Texas running back Ricky Williams.

In April 1999, the feds followed Mantemarano as part of the McNown entourage to the NFL Draft where he was selected in the first round, 12th overall, by the Chicago Bears and signed to a $22,000,000 contract. Gangland News reported that Donnie Shacks had a meeting with McNown in the spring of 1999, right after the draft, and told him they couldn’t be friends any longer and that it was best for him and his career if McNown kept his distance from him from that point forward.

Montemarano had been visited by the FBI on his return to L.A. after the trip out east to New York for the draft. McNown was dating Playboy Playmate Brande Roderick at the time.

McNown’s pro career flamed out fast he was out of the NFL within five years. UCLA went 10-2 and won the PAC-10 championship in the 1998-99 season, losing in the Rose Bowl on New Year’s Day to Wisconsin 38-31. The Associated Press and Coaches Poll voted them No. 8 in American at the end of the campaign.

Montemarano had to return to prison in 2004 for a parole violation connected to a domestic abuse incident. He was released in 2007 and lived out his final years in California.

Per NYPD documents, Montemarano got his start in the mob in 1960s under the infamous Gallo brothers (“Crazy Joey,” Larry and “Kid Blast”) and fought for the Gallos in the first Colombo Family War. Donnie Shacks was nicknamed at a young age due to his reputation as a world-class ladies man and “shacking up” with lots of beautiful women.