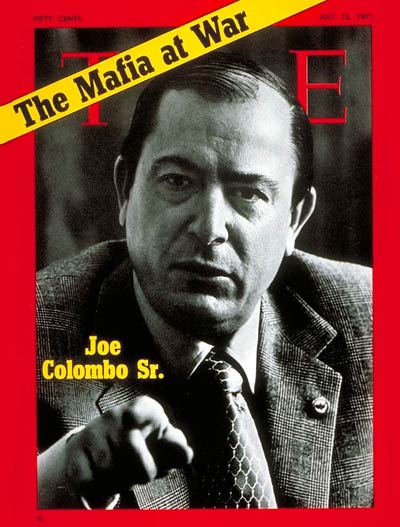 The Godfather Who Talked too Much

Joseph Colombo’s father Anthony was an early member of the Profaci crime family, forerunner of the family that would eventually bear his name. In 1938, Anthony Colombo was found strangled to death  in a car with his mistress.  Young Colombo,  dropped out to of high school to join the U.S. Coast Guard. In 1945, he was diagnosed with neurosis and discharged from the service. His legitimate jobs included ten years as a longshoreman and six years as meat salesman.

Colombo followed his father into the Profaci family., becoming an enforcer. He quickly worked his way up to Caporegime.

In 1961, Joe Gallo and his crew snatched Joe Colombo and other members of the Profaci leadership in a power grab. Boss Profaci was widely hated by  family members for his opulent lifestyle .  Eventually, the Profaci and the Gallo brothers made a deal. Colombo was released. Profaci reneged on the deal and the First Colombo War started.

Joe Colombo became boss of the Profaci crime family in the 1960’s after ratting his boss, and family founder Joe Profaci, out to the Mafia commission. Profaci and J0seph Bonanno hatched a plot knock off the bosses of the Gambino, Lucchese, and Genovese families and take control of all organized crime on the East coast. Profaci and Bonnano were punished with lifetime banishment from New York and all underworld activities. Joe Colombo was rewarded by being given the reigns of Profaci’s family, which he promptly renamed after himself.

Here’s how he died.