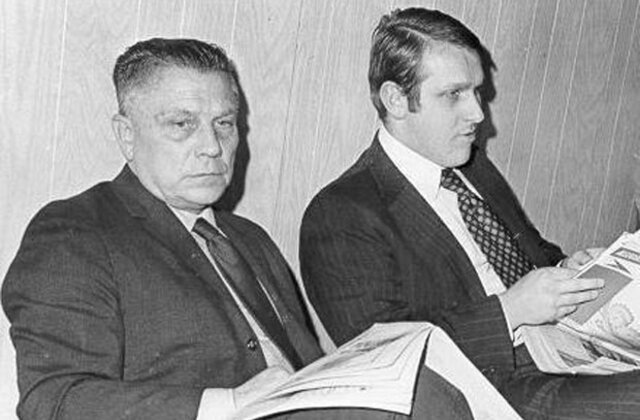 August 6, 2022 — Jim Hoffa, the retired union chief and son of slain Teamster boss Jimmy Hoffa, is writing a book titled Hoffa Is My Name, where he will deal “openly and honestly” with his father’s disappearance and murder.

Longtime Southeast Michigan scribe Jack Lessenbery broke the news for The Toledo Blade last week. Nobody has ever been charged in the still-open Hoffa homicide investigation.<

The elder Hoffa famously went missing on the afternoon of July 30, 1975 from a restaurant parking lot in Metro Detroit. Hoffa was on his way to a mob-style sit down with Detroit mafia street boss Anthony (Tony Jack) Giacalone and New Jersey mafia capo Anthony (Tony Pro) Provenzano to discuss Hoffa’s desire to return to the presidency of the mammoth Teamsters union. Hoffa’s remains have never been recovered and interest and intrigue continue to surround the iconic case nearly a half century later.

Hoffa rode his mob ties to the top spot in the Teamsters in 1957 before resigning his post in 1970 to secure a prison-sentence commutation from the Nixon White House. Although Hoffa himself was under the impression the relinquishing of power was only a temporary situation, the mafia didn’t want him back in leadership and instructed him to retire from union politics.

In 1996, Jim Hoff, was elected as president of the Teamsters. He headed the union for more than two decades, building his reputation on cleaning up much of the mob influence his father helped usher in during the 20th Century. The younger Hoffa, today 81, left his post atop the union back in March as the second-longest tenured Teamsters chief in the union’s 120-year history.