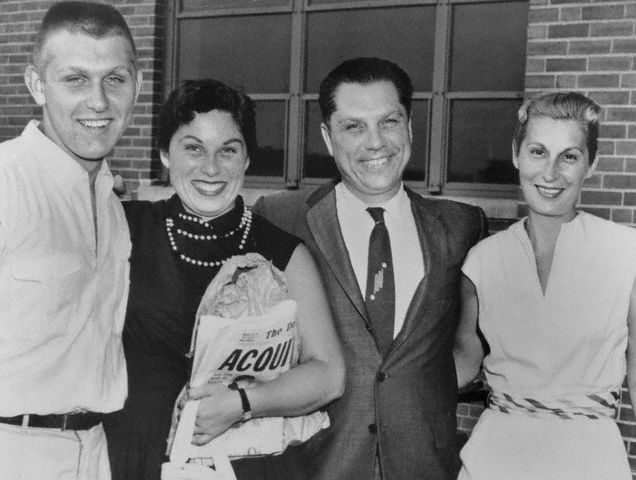 Jimmy Hoffa’s highly-accomplished offspring have been cast in the new eagerly-awaited Martin Scorsese film, The Irishman, about the relationship between Hoffa, the slain Teamsters boss, and east coast mob hitman Frank (The Irishman) Sheeran. The movie stars a cavalcade of A-List actors led by the iconic Robert De Niro and Al Pacino. Hoffa’s son James P. Hoffa, will be played by Ken Wulf Clark and his daughter, Barbara Crancer will be played by Rebecca Faulkenberry.

Wulf Clark has had small roles on network television in Fox’s Gotham and NBC’s The Blacklist. Faulkenberry is best known for her supporting role in the CBS hit show Madam Secretary and co-starring in the Broadway theatre productions of Spiderman and Groundhog Day. The 76-year old James P. Hoffa followed in his father’s footsteps and is currently the President of the International Brotherhood of Teamsters. Crancer is a retired Circuit Court Judge out of St. Louis, Missouri.

The younger Hoffa joined the Teamsters in 1959 and acted as a union attorney from the 1960s into the 1990s. He was elected president of the Teamsters in 1998 and is credited with cleansing the union ranks of the organized crime influence his dad help usher in at a wide scale throughout his rise to prominence. Once she left the bench in 2008, Crancer, 78, went on to serve as Assistant Attorney General for the state of Missouri, but vacated the post in 2011.

Scorsese’s movie is based on the 2004 book I Heard You Paint Houses penned by Charlie Brandt, Frank Sheeran’s former attorney. Sheeran dubiously confessed to Brandt, claiming he was the triggerman in the infamous Hoffa hit (most experts and the FBI doubt Sheeran’s alleged role in the murder conspiracy).

Magnetic and a genuine firebrand, Hoffa disappeared from a suburban Detroit restaurant parking lot on the afternoon of July 30, 1975 after beefing with the same mafia leaders he rode to the top of the Teamsters almost two decades earlier. He was attempting to regain power in the union in the years following his release from a prison sentence and ignored orders to relent. The day he vanished 42 years ago Hoffa was en route to meet two mob captains for lunch to try and resolve the fast-brewing dispute.

In The Irishman, Pacino will portray Hoffa and DeNiro is playing Sheeran. Pacino has never previously worked with the legendary Scorsese, while the acclaimed director made his name on the silver screen with memorable roles delivered by DeNiro. Being produced on a Netflix-commissioned $125,000,000 budget, The Irishman is shooting now in New York, New Jersey and Delaware and will be released in late 2018 or early 2019.