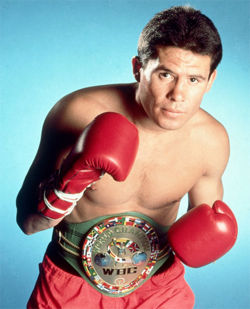 August 27, 2021 – Mexican boxing legend Julio Cesar Chavez partied with a cadre of Narcos kingpins the night he defeated Hector (Macho) Camacho in Las Vegas in 1992 to retain his WBC lightweight crown and was soon so hooked on cocaine he lost his belt, according to a new interview Chavez did with a Mexican journalist Yordi Rosado.

Cesar Chavez beat “Macho” Camacho (of Puerto Rico) in a 12-round unanimous decision on the night of September 12, 1992 at the Thomas & Mack Center on the campus of the University of Nevada-Las Vegas. His victory party in a nearby palatial hotel suite on The Strip included almost every major Narcos boss from Mexico, but apparently not enough blow.

Among the drug bosses present partying with Chavez that evening was Joaquin (El Chapo) Guzman, the world’s biggest wholesale narcotics trafficker until he was finally apprehended by the U.S. and Mexican military forces in January 2016. All the crime lords present had massive security units ensuring their safety as they partied and made their way around Vegas. Guzman headed the Sinaloa Cartel out of Mexico’s Sinaloa region.

“There was about one thousand years of jailtime in that suite that night and they all wanted to shake my hand,” Chavez recalled. “These were all the top guys. They had about 300 armed bodyguards among them, but not enough coke. We ran out pretty fast. I stopped the entire party. I stood up on the table and told these men ‘either get me more or get out.’ That’s how big of a deal I was back then. I could talk to men like that in a way nobody else could. And they listened. We had more cocaine than we knew what to do with in a matter of minutes.


That was the night, according to Chavez, that he first really indulged in snorting cocaine and he found that he enjoyed it. Over the next year and a half, he became addicted.

Chavez’s drug abuse caught up to him though. On January 29, 1994 at the MGM Grand in Las Vegas, he lost a 12-round split decision to Frankie (The Surgeon) Randall in a major upset. In his interview with Rosado, Chavez says his cocaine problem caused him to lose his belt to the American Randall.

It was a wakeup call. Chavez began getting his drug habit in order. Within months, he had his title back, too. Back at the MGM Grand that spring, Chavez won his rematch with Randall on May 7, 1994 via a technical knockout in the eighth round.

Chavez retired in 2005, concluding an acclaimed career where he was a six-time world champion in three different weight classes. Boxing historians consider him the best pound-for-pound prize fighter of the early 1990s. He left the ring with a final record of 107-6.

In 2011, Chavez was inducted into the International Boxing Hall of Fame. Today, the 59-year old former pugilist is in recovery and owns several drug clinics and rehabilitation facilities.