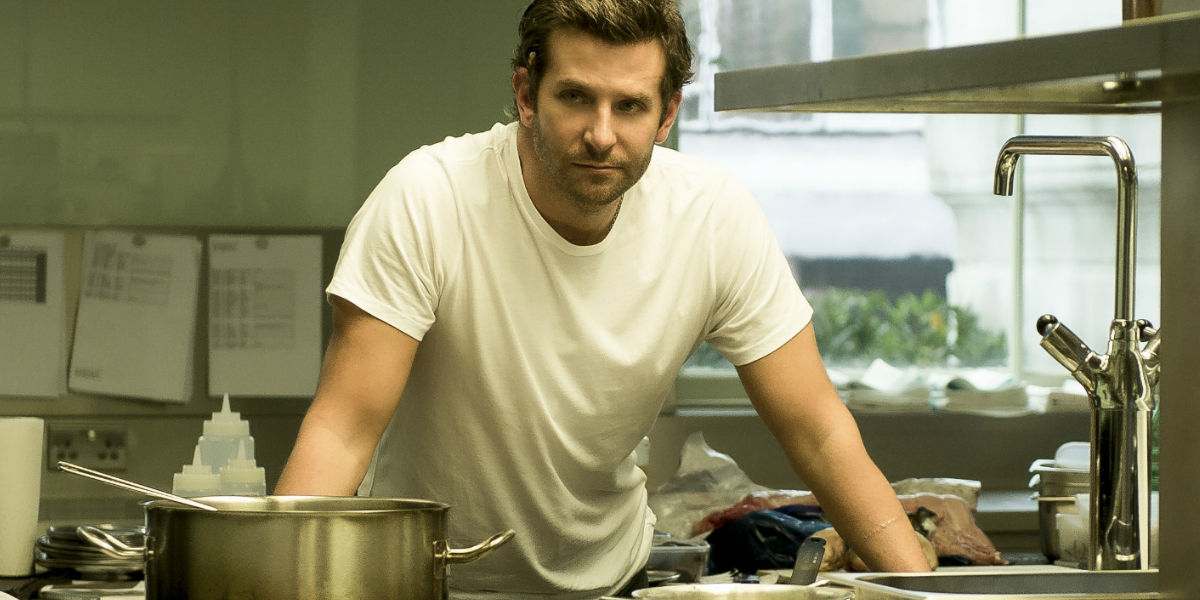 The sizzle of a pan, the spark of a burner, the beauty of Bradley Cooper berating you for your incompetencies; it’s a beautiful picture. Especially when it’s set in London and half the screen time is exquisite dishes prepared by world renowned chefs. The story of Burnt revolves around the character Adam Jones (Bradley Copper), a one-time top chef but because of drugs and alcohol he ended up not only losing his placement as a respected chef but also ended up alienating his colleagues and allies and making enemy upon enemy in the process. Adam, after recuperating and finding the passion to earn his third Michelin star, returns to London and through his charming, cunning and determined personality, finagles a position as the chef at a fine restaurant headed by his former maitre d’. Through something best described as force, Adam manages to acquire Helene (sienna Miller), a talented and strong chef, as part of his kitchen staff. *que obligatory romantic subplot* Adam proves himself to be no-nonsense in the kitchen and demonstrates to his kitchen staff time and time again that absolutely nothing short of absolutely perfection will be tolerated.

The film was shot with a very ambitious and driven perspective, which was undoubtedly a reflection of Adam’s own mental state. The movie flies effortlessly and fluidly through fast-paced filming and quick shots of various kitchen goings-on. If it weren’t for the fact that recognizable actors were being used, you’d wonder if these were actual chefs and not simple people playing roles. The use of cool tones by use of color correction was mild, which I appreciate. They barely played down to the audience and assumed you needed a certain tone to fully understand the state the character’s were in – something many modern movies thinks is necessary.

Cooper and Miller’s chemistry is dynamic and the tension of all of the emotions that come up in the films are tangible between the two. Cooper’s performance summons you to enter the brain of a person overcome with passion and trying desperately to rebuild himself from regrets. His pain and his torment is all too real at times but the wit and quick hits of humor and intelligence bring this movie the pace I was talking about earlier. In other words; bravo writers, bravo! When watching a film it’s easy to see the passion and the tone of the writing because the actors bring it to life but seeing all of that in your mind and having faith that whomever reads your work will pick up on your intentions is, for lack of a less blasé word, hard. The interaction of the characters, even the ones at odds with each other, evoke a new and undeniable bent on the term ‘family’.

The plot has a great progression and the writing was phenomenal. The filming was fantastic and the acting was superb. I’ve always thought of two different ways a movie’s story can be, not told, but perceived. You can either see a movie and get a message, a moral, a lesson; or you can just be told a story. Some of the most impactful movies I’ve ever seen have been those that don’t strive to intentionally leave you with a specific message but rather leave you with the ability to form your own. Some, in fact, have left me simply a story that I’m either happy or agitated to have been told, depending on its quality. Burnt, for myself, is of the first category. The film leaves you with a few distinct sentiments and clearly defined messages. That’s not to say it wasn’t bold in its execution, nor is it to say it could have been bolder, but while it was technically fantastic it could have pushed the boundaries further. It could’ve striven to be a little farther outside of the box and, in turn, I believe that would’ve left the viewer thinking about it and deciphering it in their minds. IT could’ve taken more risks with he story and maybe even delved deeper into the characters that weren’t billed first. Burnt was a wonderful execution of a heartwarming and inspiring story. And if my biggest complaint is that I wanted more, I suppose that’s a good thing.