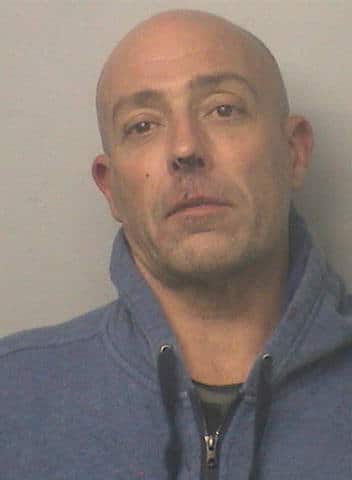 January 11, 2022 — The man who most-likely killed Boston mob enforcer Robert (Bobby the Beast) Nogueira back in 1990s is out of prison and back in trouble with the law after an incident last weekend where he crashed his car into a liquor store, popped a brew, lit a stogie and then assaulted a responding police officer. He took a swig of bourbon, scarfed down a bag of potato chips and bashed in a window with a brick, too.

Fifty-four year old Johnny Bacigalupo, who had his murder conviction in the Nogueira case tossed courtesy of a faulty jury instruction, was taken into custody in Stoneham, Massachusetts early Saturday morning inside Rapid Liquors. He had to be tased by the police to subdue him and get him into handcuffs. On Monday, he pleaded not guilty to the charges of assaulting a police officer, breaking and entering, driving under the influence and destruction of property.

Bacigalupo lives in Revere. His younger days were spent in East Boston. Nogueira’s allegiance at the time of his death was to the East Boston faction of New England’s Patriarca crime family. The East Boston crew engaged in a multi-year shooting war with mob groups from Providence, New Haven and parts of Boston’s North End loyal to the Rhode Island wing. Originally, “Eastie” joined forces with the North End to challenge the family’s administration out of Federal Hill in Providenc

In 2001, Bacigalupo was found guilty of the Bobby the Beast hit and sentenced to life in prison. But the Massachusetts Supreme Court vacated his conviction on appeal because of second-hand testimony tying him to Nogueira’s homicide and the presiding judge’s failure to instruct the jury that the information can’t be used against him because he was never allowed to face his accuser in court. He walked free in 2011.

Nogueira, 39, died in a hail of gunfire in the parking lot of a Saugus, Massachusetts Comfort Inn hotel on November 24, 1996. Bacigalupo owed Nogueira’s boss, then New England mafia soldier Vincent (Gigi) Marino’s a $7,000 drug debt and had been pressing him for repayment he didn’t have to make.

According to prosecutors, Bacigalupo went on the offensive, shooting Gigi Marino and his driver, Charles (Charlie Mac) McConnell, at Club Caravan and then minutes later, gunning down Bobby the Beast. Per FBI records, Noguiera was Marino’s muscle and collector. Marino fought on the front lines of the Great New England Mob War of the late 1980s and early 1990s. He was busted in a federal RICO case five months following being wounded in the Club Caravan shooting.