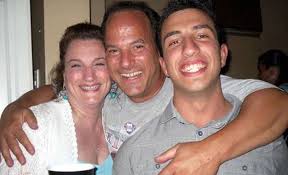 The brazen 2012 slaying of Gino DiPietro was sanctioned at the highest levels of power in the Philadelphia mafia, according to exclusive Gangster Report sources. The feds are hoping to wrap the DiPietro murder, and maybe others, into a future RICO indictment against Pennsylvania mob don Joseph (Skinny Joey) Merlino and his longtime right-hand man and current acting boss Steven (Handsome Stevie) Mazzone, law enforcement sources say.

The good-looking, media-savvy Merlino is in the final weeks of a brief four-month stay in prison courtesy of a parole violation that took place last summer and will be released on May 3, the same day he will finally be “off paper” and unhindered by any government encumberance for the first time since the Bill Clinton administration.

DiPietro (pictured in this article’s featured image) was felled in a barrage of bullets at point-blank range while getting into his vehicle on a crowded South Philly street corner in broad daylight on the afternoon of December 12, 2012 as Merlino’s then-acting boss and current consigliere Joseph (Uncle Joe) Ligambi sat on trial merely blocks away in a federal courtroom. Ligambi would walk from his own RICO case in January 2013 after a pair of hung juries.

In the wake of his death, it was revealed that DiPietro, a convicted narcotics distributors, had been an FBI informant and helped put his cousin and mob associate Victor DiPietro behind bars by wearing a wire in the 2000s to get out of a cocaine conspiracy case he took in 2004 when he was already on parole from a late-90s coke-peddling bust that he was forced to serve time for.

Back in February, Philadelphia mafia soldier Anthony Nicodemo, pled guilty to taking part in the DiPietro hit – prosecutors peg him as the getaway driver –, opting out of a second trial on charges after his first one ended in a mistrial amid whispers of jury-tampering and he accepted a 25-to-50 year plea deal. Nicodemo, 43, rose through the ranks of the mob in the mid-1990s while acting as Merlino’s driver and bodyguard.

Another local street figure, reputed mob soldier, Dominic (Baby Dom) Grande, 35, a protégé of Nicodemo’s and Mazzone’s, has been linked to the DiPietro homicide, fingered by authorities and sources as the alleged shooter in the hit, however has never been charged. Grande and Nicodemo were both busted in a federal gambling case in 2007.

Gangster Report sources reveal a confirmed meeting between Nicodemo and Merlino in the weeks leading up to the DiPietro murder and one between Nicodemo, Grande and Mazzone the night before the hit was carried out, receiving authorization and a final go-ahead, respectively.

“Nobody pulls that kind of cowboy shit without getting it cleared,” said one source in the Philly underworld. “If people think Nicodemo just decided to sneak that hit in and thought nobody would notice and wouldn’t call him out for it, that’s nuts. Nicodemo’s Joey’s guy. He would have never done that without Joey’s blessing.”

Merlino, 52 and his best friend, Mazzone, 51, were convicted in 2001 on RICO charges, an indictment that included several gangland-style murders tied to their takeover of the Philadelphia crime family in the 1990s, but only resulted in straight racketeering convictions and acquittals on the homicides. Mazzone did eight years of time on the case, Merlino a dozen. Upon his release in 2011, Merlino made a high-profile (what else for the famously thin one) relocation to south Florida, settling in posh digs in a trendy area of Boca Raton and wasn’t shy about announcing his presence in the Sunshine State, conducting interviews with media members both in the local and Philadelphia media .

Skinny Joey was in South Philly in early November 2012 for the funeral of his father, the imprisoned former syndicate underboss Salvatore (Chuckie) Merlino, which occurred exactly a month to the day DiPietro was killed in cold blood nearby. The bereaved younger Merlino visited the old neighborhood beginning on November 7 and lasting until November 14. It was during this trip, according to sources, that Merlino signed off on the DiPietro hit, sitting down with Nicodemo, a suspect in more than one gangland murder in his days climbing the latter in the City of Brotherly Love’s mafia family and okaying his use of Grande, the son of one-time assassin and Philadelphia mob turncoat Salvatore (Wayne) Grande.

On the evening of December 11, less than 16 hours before DiPietro wound up dead, sources tell Gangster Report, both Nicodemo and Grande met with Mazzone at an undisclosed South Philly residence to go over last-minute details of the hit, a mob murder that can go into the underworld Hall of Fame for all-time poorly-orchestrated crimes. Besides carrying out DiPietro’s killing on a busy street in the middle of the afternoon during the Christmas Holiday shopping season, Nicodemo was driving an SUV registered in his name and left the vehicle with the alleged murder weapon inside parked in his driveway five minutes away from the murder scene. He was arrested within a half hour, tracked via a witness jotting down his license plate number and giving it to responding detectives.

When one source was pressed to speculate on motive in the hit, he responded, “Johnny Gongs,” alluding to DiPietro’s possible knowledge of details surrounding the 2003 gangland murder of renegade Philadelphia mob associate, John (Johnny Gongs) Casasanto. Nicodemo and Merlino have been looked at by the FBI as suspects in the Casasanto slaying. DiPietro’s name has never been tied to any part of the probe.

DiPietro’s cousin and then drug-dealing partner Victor found Casasanto’s dead body in Johnny Gongs’ kitchen, shot in the back of the head by someone who he had let in his front door. Victor DiPietro’s big brother, Nicodemo (Nicky Slick) DiPietro, is rumored to have bragged to a cell mate on an unrelated case he was jailed on that his cousin Gino was living on borrowed time.

In addition to being on an opposite side of the 1990s mob war Merlino won to assume the reins in the organization, the notoriously reckless Casasanto was allegedly carrying on an affair with Skinny Joey’s wife while Merlino served time on his racketeering conviction, claim sources close to the Merlino camp.

Attempting to rechristen himself a restauranteur in Florida, Skinny Joey, purporting to be retired from his tenure on top of the mob is “fronting” a new Boca Rotan bistro, called, “Merlino’s,” – a job he’s telling people he’ll return to after he’s sprung from the clink in May. The FBI offices in Florida and Philadelphia confirm active investigations into Merlino’s affairs. People with knowledge of the situation believe the feds are aiming to land a multi-tiered indictment that could include murders that date back to the late-1990s at Merlino’s doorstep soon and activity in both Philadelphia and Florida.

Certain Gangster Report sources caution “tempering expectations” in regards to any pending RICOs being filed against Merlino and his mob underlings, citing prior misleading reports of indictments on the verge of being dropped surfacing in the past decade-plus and being tagged to leaks in the FBI.