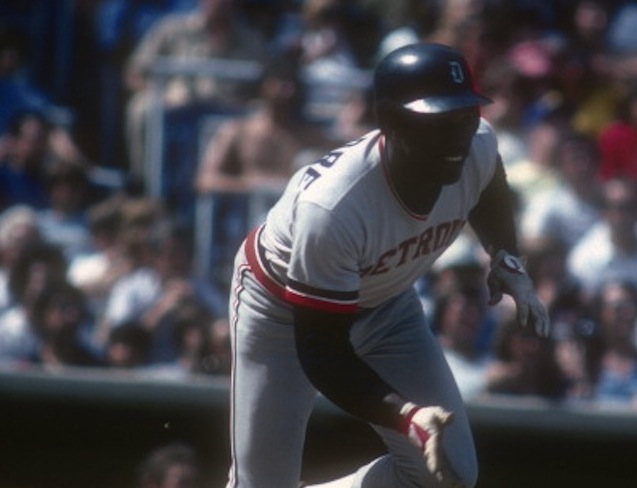 Per DEA records, one of the main reasons the Detroit Tigers traded all-star baseball player Ron LeFlore in December 1979 was because of his palling around too much with local gangsters, specifically a man known as “Big Frank Nitti.” After six seasons in a Tigers uniform, LeFlore, a native of the Motor City, fan favorite and a true rags-to-riches story – going straight from prison to the big leagues –, was shipped off to the Montreal Expos for pitcher Dan Schatzeder, months following a gruesome triple-beheading mass murder linked to the Murder Row gang and its’ leader, disco-era Detroit drug lord Francis (Big Frank Nitti) Usher.

Convicted of the grisly slayings in 1980, Usher had the conviction overturned on appeal in 1988 and won an acquittal at a second trial. Free since 1994, Big Frank Nitti, one of Michigan’s most notorious and feared underworld figures of all-time, was back in the news last week when he was arrested by federal authorities in Detroit for selling heroin to undercover DEA agents and overseeing activity at an eastside narcotics den from his stylish suburban residence in Southfield.

LeFlore, 66, and Usher, 71, were social companions in the 1970s at the apex of both of their statuses in the pop culture milieu of southeast Michigan during the days of disco dancing, Saturday Night Fever, leisure suits and President Jimmy Carter, according to DEA informants in an internal federal government dossier on Usher issued in November 1977. The gangster-and-athlete duo were observed by federal agents hobnobbing with each other and additional nefarious characters emanating from the local gangland scene at various high-end restaurants and nightclubs around the area between 1975 and 1979, the height of Usher’s reign atop the city’s drug-dealing game and a time which he is suspected of ordering or carrying out over a dozen executions.

Usher and his all-black Murder Row empire were underwritten, so to say, by the Detroit Italian mafia. Before he created Murder Row, Usher was a “junior member” of the Giacalone brothers crew, ran by the Motor City mob’s longtime street boss tandem of Anthony (Tony Jack) Giacalone and his baby bro, Vito (Billy Jack) Giacalone. The ambitious and eager-to-learn Usher was hand-picked by them as a young teenager from the eastside neighborhood that surrounded their crew’s headquarters at the Home Juice Company and personally mentored in the art of criminality by the Giacalones themselves. Tony and Billy Jack even bestowed upon their black-gangster protégé his famed nickname, in reference to the one-time Chicago mafia boss Frank (the Enforcer) Nitti.

A petty criminal and drug addict as a young man, LeFlore was sent to state prison in 1970 for armed robbery and joined a sandlot baseball league behind bars. By 1973, the speedy, spunky and quick-swinging LeFlore, who prior to being incarcerated had never played any form or organized ball, caught the eye of the Detroit Tigers and then-manager Billy Martin and literally jumped right from the prison yard to the pros, with Martin and the Tigers arranging his parole.

Making his MLB debut in August 1974, Leflore took over as the team’s starting centerfielder and leadoff hitter in 1975, soon becoming an all-star (1976) and along with pitching phenom Mark (the Bird) Fidrych, injecting newfound life and energy into an aging organization, bridging the gap between Al Kaline, Norm Cash and the 1968 World Series group and the 1984 bengals’ core of Jack Morris, Lou Whitaker and Alan Trammell.

It was during this same timeframe that Usher and his Murder Row syndicate were decimated by the July 18, 1979 triple murder of two Murder Row lieutenants and one of their girlfriends, their decapitated bodies discovered inside an abandoned van on Detroit’s eastside literally dripping blood from its doors and windows. The slayings and forthcoming legal assault against Murder Row wound up opening the floodgates and leading to the ascension of the equally flashy and lethal Young Boys Inc. and its head honcho, Milton (Butch) Jones, in the coming years.

Usher and four others were indicted for the beheading homicides in October, LeFlore was gone by the end of the year. Despite the stellar campaign he was coming off of and his popularity with the Tigers’ fanbase, the organization didn’t want the headache, so they sent him across the border to Canada.

One well-informed source says the Tigers hired a private investigator to tail Leflore when he left the ballpark throughout the ’79 season and make a record of his interactions with “undesirables” on off-hours. This source claims the PI encountered LeFlore meeting and dining with Usher on a semi-regular basis and reported it back to the team’s president and GM Jim Campbell.

According to the DEA files, LeFlore and Usher were introduced around 1975 by Detroit wiseguy and Giacalone crew member Jimmy (Cokey) Karalla, the same man, who while he and LeFlore were imprisoned together at Jackson State Penitentiary got word to Billy Martin and the Tigers through his contacts on the outside alerting them of LeFlore’s prowess on the diamond.

Martin arranged for LeFlore’s signing with the Tigers, however, never managed him with the club, departing for a skipper post with the Texas Rangers, eventually landing with the New York Yankees and leading the Pinstripers to the 1977 World Series title. Karalla died of natural causes in 2010, as did both Tony and Billy Giacalone in 2001 and 2012, respectively.

The year right after he left Detroit, Leflore excelled with the Montreal Expos, topping all National League speed demons with 97 stolen bases (still good for the Expos-Washington Nationals single-season franchise record) in the 1980 campaign. The next season he was traded to the Chicago White Sox. LeFlore played two years with the White Sox and then called it quits after being cut by the Chisox at the conclusion of spring training in 1983.

His stint in a Chicago uniform was plagued by erratic behavior, fights with management and an arrest for drug and gun possession at the tail end of the 1982 season. Even though he beat the charges in the Windy City at trial in the offseason, LeFlore failed to recover on the field and couldn’t win a job on the White Sox 1983 roster at camp. 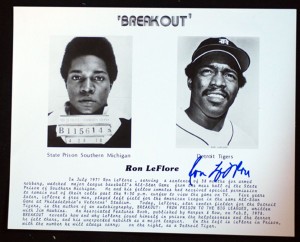 Interest in LeFlore’s story was rampant in the late 1970s, resulting in a book (Breakout) and television movie (One In A Million) chronicling his ascent from prison inmate to pro athlete, the latter starring LeVar Burton (Roots, Star Trek-Next Generation and PBS’ Reading Rainbow).

Unfortunately, there’s no Hollywood ending for LeFlore -since his playing days came to an end more than 30 years ago, he’s been hounded by woes, financial (he was working as a baggage handler at a Florida airport within five years of retirement), legal (multiple failure to pay child support arrests, one at Tigers Stadium on the night they closed the place down) and health-wise (he had his leg amputated in 2011).