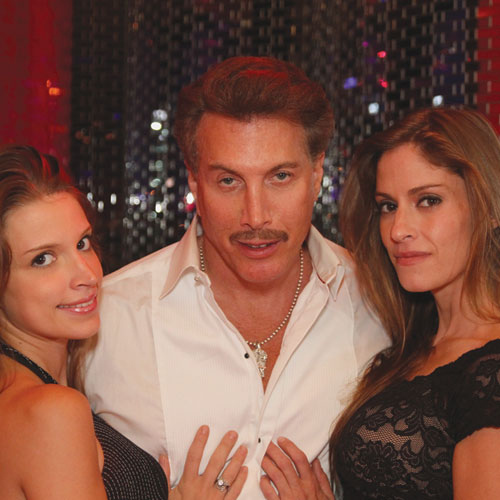 The strip club king of Detroit hasn’t received a very loving welcome to the City of Brotherly Love, especially not so by the notoriously unfriendly Philadelphia mafia. Alan Markowitz, Michigan’s biggest topless bar owner and legal flesh peddler, opened a Penthouse Club in Philly five years ago and has fended off multiple extortion attempts by the area’s Italian mob, according to exclusive Gangster Report sources. Exactly how Markowitz, currently starring in the Cinemax reality television show, Topless Prophet, has been successful in getting the Philadelphia mob family, also referred to as the Bruno-Scarfo syndicate, to back off is unknown.

“The Philly guys were pushing pretty hard, applying a lot of pressure for Alan to kick up to them, but he never has,” said one law enforcement source. “He’s got balls and in that business you need to have balls. Alan Markowitz might be a lot things however a mark, someone you can just muscle easily, he’s not.”

Did the eccentric and flashy Markowitz, a man that has dodged at least three attempts on his life in the past and invented the concept of the high-end strip club in Detroit, reach out to mobsters in his hometown of the Motor City for help in resolving the situation? It’s possible. There are ties between the mafia contingents in Detroit and South Philly.

Reputed Detroit mafia captain Paul (Big Paulie) Corrado was cellmates in prison in the 2000s with Philadelphia mob associate and New Jersey restaurateur Angelo (Fat Angie) Lutz. The 56-year old Corrado and the 51-year old Lutz served time together at a federal correctional facility in Milan, Michigan on a pair of separate racketeering convictions. Corrado was indicted with almost the entire Detroit mob administration in 1996, while Lutz was indicted with the whole Philly crime family power structure in 2000.

Fat Angie was basically a gangland gopher and compulsive gambler who grew up with Philadelphia mob don Joseph (Skinny Joey) Merlino and is far from a goon, as opposed to Big Paulie who cuts more of your traditional Mafioso figure and was a strong-arm, shakedown artist and loyal foot soldier during his “come-up” in the rackets in the 1990s at the height of the Giacomo (Black Jack) Tocco regime.

Lutz was released in 2008, Corrado in 2010. In a cooking video Lutz posted online prior to opening his Kitchen Consigliere Restaurant in Collingswood, New Jersey a few years ago, Fat Angie prepared for his viewers Big Paulie’s favorite dish and showed a photo from Corrado’s wedding.

During the first year of his 12-year prison bid, Corrado was on the same cellblock with soon-to-turn Philadelphia mafia boss Ralph Natale and became buddies for a short period of time with the old school Godfather about to enter the Witness Protection Program. Per sources, Natale was recently debriefed by FBI agents in Detroit and Philadelphia regarding conversations he had with Corrado in prison.

Black Jack Tocco, Corrado’s cousin and a sitting Godfather for 35 years, died of natural causes last summer. Tocco was named the Detroit mob’s acting boss in 1974 and then ascended to the official boss’ chair in 1979. FBI agents followed Tocco and Big Paulie’s dad, long-deceased capo Dominic (Fats) Corrado, on a trip to Pennsylvania in the months after he took the throne to break bread with Philadelphia mafia boss Angelo Bruno, the first stop on a multi-state swing to introduce himself in person to several east coast dons. Bruno and Joseph (Joe Uno) Zerilli, Tocco’s uncle and predecessor, sat on the mafia’s National Commission, the American mob’s now-defunct governing body, made up of all the most powerful dons in the country – Bruno and Zerilli were two of only a select few non-New York bosses to hold seats.

In the mid-1970s, the Detroit and Philadelphia Families joined forces on a horse-race fixing operation in Michigan, using stables, thoroughbreds and jockeys at mob-controlled tracks to manipulate outcomes. Bruno’s representative in the lucrative scam was Pasquale (Pat the Cat) Spirito, inducted into the Philly mob in the early 1980s and killed shortly thereafter. Bruno himself was assassinated within weeks of having dinner with Jack Tocco and Dominic Corrado at a popular South Philly eatery in January 1980.

Big Paulie Corrado was promoted to a capo post last year, per sources on the street and in law enforcement in Detroit. Earlier this year, he opened a restaurant called Dominic’s, named in honor of his father, in Harrison Township off Jefferson Avenue.

One of the things Corrado was convicted of at trial in 1998 was for overseeing the Detroit mafia’s strip-club extortion racket, in charge of looking after the crime family’s point-man in the industry, John (J.J.) Jarjosa, tasked with collecting the street tax from his fellow strip-club owners and also convicted in the case the feds titled Operation GameTax. Jarjosa is of Iraqi descent. Jarjosa’s son, John (John John) Jarjosa, Jr., was slain gangland-style in 2001 as his dad served his time in prison.

Around the time Jarjosa was murdered, Alan Markowitz was negotiating to buy the Jarjosa family’s topless bar, the Body Shop, along 8 Mile Road, “strip-club row” in the Motor City (the deal was never made). Jarjosa, Jr. was running the family business with his father away in the slammer and was felled minutes after departing the Body Shop, the car he was driving boxed in at a traffic light and gunned down by a masked assailant.

Markowitz, a fixture in the Detroit strip club scene since the late 1970s and someone people call the Hugh Hefner of Southeast Michigan, has sidestepped death on three separate occasions. First, in the early 1980s, he was shot in an attack by an angry stripper. A dozen years later, he was shot again – this time in the face by a drunk off duty cop harassing one of his dancers. In 1993, Markowitz’s partner, alleged Detroit mob associate Freddy Giordano, was arrested for putting a murder contract on Markowitz’s head.

According to the indictment, Giordano hired a pair of hit men, Dino Tilotti and Alan Howard, to kill Markowitz (pictured in this story’s featured image). Howard, who lived in Boston, got cold feet though and went to the FBI instead. He did three years behind bars. Tilotti, a Detroiter with ties to both Italian and Arab organized crime factions in Michigan, as well as links to the area motorcycle gang landscape, did a decade in prison on the case. Giordano was acquitted of the charges (partially attributed to Tilotti falling apart as a witness against him). Today, Giordano owns several bars and restaurants in Metro Detroit, including one with a nephew of Jack Tocco.

Created by The Fast and The Furious director Rob Cohen, in 2014 Cinemax premiered the reality tv series Topless Prophet, based on Markowitz’s self-published biography of the same name and following his day-to-day life as a high-profile Motor City strip club impresario. Besides the pair of Penthouse Clubs he has in Detroit and Philadelphia, Markowitz owns the plush and extravagant Coliseum on 8 Mile and his flagship Flight Club (formerly 747s) by the airport. His first club, the Booby Trap, was a staple for area sports figures and celebrities as well as touring rock-and-roll stars in the 1980s.