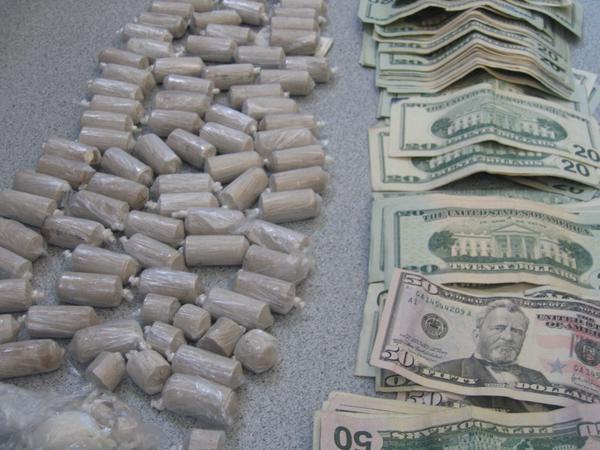 According to a federal indictment filed this week, Francis (Big Frank Nitti) Usher, the most notorious Detroit drug kingpin from the disco era of the late 1970s, is still moving and shaking in the Motor City underworld. Usher, 71, was taken into custody without incident at his Southfield residence Thursday, charged with selling heroin out of a Detroit home on St. Aubin near East McNichols Avenue. Undercover federal agents made multiple buys from Usher’s alleged drug den in recent weeks, per the indictment, and witnessed him directing narcotics activity from his luxury Ford truck outside the St. Aubin property.

From 1975 until his conviction for a notorious triple beheading in 1980, Usher and his “Murder Row” gang ruled the city’s streets. Authorities tab him a suspect in at least 15 slayings.

His 1980 murder convictions and life sentences were thrown out on appeal and Usher was acquitted at a new trial, when elite defense attorney Steve Fishman was able to convince jurors that he was the target of the July 1979 bloodletting at the Michigan Federated Democratic Social Club, not the coordinator of the attack. Once he was done serving his time on a “CCE” (continuing criminal enterprise) conviction, he was freed in the mid-1990s.

The infamous triple homicide over 35 years ago was the result of infighting amongst the Murder Row hierarchy, specifically Usher and his main enforcer Adolph (Doc Holiday) Powell, slain in 1983 at a local bar with a fifty-dollar bill in his hand while downing a shot of liquor.

A U.S. Magistrate ordered Usher held without bail Thursday in a hearing where he told the court that he’s been retired since 2002, when he was a greeter at a restaurant.

Reports following his release from prison in 1994, placed Usher in Indiana, running a health food store. He resurfaced locally a little over a year ago as a pallbearer at the funeral of legendary Jewish Detroit mafia associate, Allen (the General) Hilf.

oomed in the underworld by Michigan mob leaders, Anthony (Tony Jack) Giacalone and Vito (Billy Jack) Giacalone at the peak of their power in the 1960s. His roots with the Giacalones ran deep, getting his start with the pair of feared Mafiosi as an errand boy during his teenager years. A newspaper photo from the early 1960s showed a young Usher following Tony and Billy Jack into a court appearance, carrying their briefcases.

The Giacalone brothers, both deceased, are the prime suspects in the Jimmy Hoffa murder, as well as literally dozens of others and gave Usher his nickname, “Frank Nitti,” after former Chicago mafia don Frank (The Enforcer) Nitti, Al Capone’s cousin and successor.

Hilf, the Giacalone crew’s top earner and one of the country’s largest bookmakers and most accomplished handicappers, acted as a liaison between the Italian mafia and the black drug dealers and racketeers in Detroit during Usher’s prior heyday. At the time of his death by natural causes in January 2014, Hilf was considered the closest advisor to current Detroit mafia don, Jack (Jackie the Kid) Giacalone -Billy Jack’s son, Tony Jack’s nephew.

“We’d follow Allen into the city to Usher’s house and see them talk shop,” recalled Mike Carone, an FBI agent in Detroit for 30 years. “Originally, we were surprised, but then we realized that the two groups, the blacks and the Italian’s, were working together. The Giacalones set Usher up in his business. He did their bidding in the drug world in Detroit proper.”

Testimony in front of a U.S. Congressional committee in 1988, claimed Usher’s Murder Row organization in the 1970s was the last urban drug conglomerate to rely solely on the Italian mafia in Detroit for their product supply.

At start of his local gangland career, Usher was tied to violence-starved Chester Campbell, a nationally-renowned hit man and freelance muscle-for-hire, known on the streets as “Dr. Death,” “the Black Angel of Death” and “the Undertaker” for his Hannibal Lecter-like high intelligence and thirst for human flesh – not to mention his headquartering his criminal affairs out of a funeral owned by his girlfriend. Campbell died in a prison hospital in Minnesota of hepatitis in 2001 at 71 years old (the same age Usher is today).

Fox2 News and reporter Ron Savage broke the most recent Usher arrest story Thursday night, with television cameras on the scene as he was led away in handcuffs by DEA and ATF agents, accompanied by Wayne County Sheriff’s Department personnel.