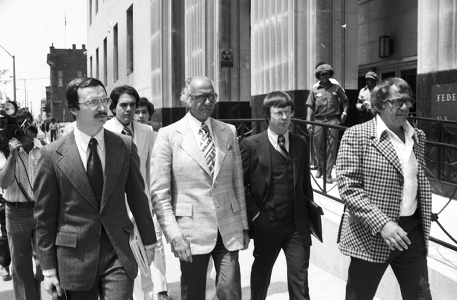 The Harvey Leach murder case is officially closed. According to sources in Michigan law enforcement, investigators in the 40-year old Metro Detroit gangland slaying have put away any thoughts of solving the notorious mob murder.

The FBI believes any remaining first-hand knowledge of who killed Harvey Leach, an execution that goes down as one of the region’s most high-profile unsolved homicides of the 20th century, probably went to the grave with Leonard (Sports Club Lenny) Schultz, a longtime Mafia associate who died last year as a main suspect in the heinous crime that took place in the spring of 1974.

Schultz passed away from natural causes at the age of 96 in Florida last fall with a lengthy felony rap sheet. Per sources, the Feds were leaving the door open in the case after Schultz died in hopes that one of his associates may come forward in his absence to divulge what he told them about the hit. It never happened and the case was filed away in the basement of FBI headquarters in downtown Detroit recently.

Reputedly mob-connected himself, Leach, 34, wealthy and owner of a well-known home decorating chain, was discovered in the trunk of his car, his body battered and his throat cut, in the parking lot of the Congress Building, an office complex in ritzy suburban Oakland County, on March 16, 1974, just minutes before he was supposed to get married.

Investigators believe Leach disappeared on his way to Schultz’s Franklin Village home, only a couple miles away from the Congress Building, for a business meeting with Schultz and fearsome Detroit mafia street boss Anthony (Tony Jack) Giacalone, Schultz’s “underworld sponsor,” and confidant, the day prior.

Leach bought failing Robinson Furniture in 1971 and changed its name to Joshua Doore. The switch worked and the chain became an area staple in the community, widely known for its hip inventory and an advertising jingle that told customers that they had an “Uncle in the furniture business.”

Members of federal law enforcement who worked the Leach case say Leach and Schultz were friends and that Schultz had lent Leach money in the past and introduced him around to his gangster pals.

Informants told the FBI that Schultz had brokered a loan between Leach and Giacalone, in order to expand Joshua Doore. After Giacalone got his hooks into the business, Leach began butting heads with the mobster and the company began incurring financial problems, due to Tony Jack’s bust-out tactics.

As a result, Schultz, according to the informants, was helping Leach and Giacalone work out an agreement where Leach would sell the business to a Giacalone associate, but things allegedly weren’t going smoothly and the pair were haggling over the purchase amount.

The meeting Leach was headed to the day he ended up dead also was to have been attended by Schultz, Giacalone and two additional Joshua Doore executives, FBI documents say, and the topic of discussion was to be the buy-out price.

The federal files tell of Giacalone calling the two executives and informing them to come to the meeting an hour late, Schultz telling his wife to leave their house and not come back until the late afternoon and Leach never showing.

Giacalone, the Detroit mob’s day-to-day overseer for almost five decades and a man that was a suspect in dozens of gangland slayings, reportedly got to the meeting late himself and told those in attendance “Harvey won’t be making it” with a sly grin on his face.

Other possible motives the FBI fielded from informants beside the business relationship-gone-bad angle were Leach’s possible involvement in helping Giacalone launder money through channels in Canada, and an alleged romantic affair the young and affable millionaire was engaging in with the girlfriend of Giacalone’s little brother, Vito “Billy Jack” Giacalone, while Billy Jack was away in prison.

Billy Giacalone, also a powerful mobster in the area and decade-long capo and future underboss in the syndicate, was released from behind bars in the months prior to Leach’s untimely death.

Leach’s body was found exactly an hour before he was scheduled to marry his fiancé, Beverly, who had reported him missing when he didn’t return from his meeting at Schultz’ house.

“Lenny and the Giacalone brothers were the top persons of interest in the investigation, they all had dealings together,” said a retired U.S. federal prosecutor and Southeast Michigan Organized Crime Task Force member. “Lenny was one of their top guys, they trusted him a lot and he was privy to a lot of highly-sensitive information related to mob affairs in the city. We watched him closely and it wasn’t that hard because he was always hanging with Tony and Billy, who we had a beat on 24-7.”

Investigators pegged Schultz a “set-up man” on the Leach hit, not the “doer,” or person who actually committed the physical killing.

“If Lenny was instructed by the Giacalones to set Harvey Leach up to be murdered, I believe he would have done it,” the former prosecutor said. “Realistically, he wouldn’t have had much of a choice.”

Leach’s funeral attracted almost 1,000 mourners. In the wake of his passing, Joshua Doore went into bankruptcy and eventually was bought by another Giacalone associate and had its name changed back to Robinson Furniture.

Closing its doors for a dozen years, Robinson Furniture re-opened in Detroit under new ownership in 2010.

The legendary Giacalone brothers (both dead  of natural causes – Tony in 2001 and Billy in 2012), and Schultz would have their names come up again as suspects in the famed Jimmy Hoffa disappearance and murder a little more than a year after the Leach homicide All three were called in front of federal grand juries investigating the pair of slayings in the years following.

Schultz was considered the Giacalones’ “No. 1 troubleshooter” in the Teamsters for more than 30 years and the liaison between Tony Jack and Hoffa, the Teamsters’ one-time mob-backed President fighting to retain control in the goliath truckers’ labor union. Sports Club Lenny and his two sons owned and operated Tony Giacalone’s headquarters, the Southfield Athletic Club, formerly located in the Travelers Towers off Evergreen Road in Southfield, the first suburb north of Detroit’s city limits.

As a young boy, Schultz was groomed by the Purple Gang, the city’s all-Jewish mob during Prohibition and into the 1930s and 40s that would eventually peacefully merge with the traditional Italian LCN by the outbreak of World War 2. While in his 20s, Schultz was the driver and bodyguard for Purple lieutenant Abe (Abie the Agent) Zussman, before going to work for the Giacalone brothers in the 1950s.

Tony Jack and Schultz were at the Southfield Athletic Club the afternoon Hoffa vanished and were seen eating lunch with Leach there in the years and months leading up to his homicide. Hoffa, who was feuding with the mob at the time of his death, had been using Schultz as his go-between with the Giacalone brothers and both Schultz and Tony Jack were supposed to meet with Hoffa at a suburban Detroit eatery on the day in July  1975 he went missing.

One member of the Detroit underworld familiar with the Leach situation summed it up this way: “The Giacalones were trying to bust out his business (mob slang for takeover and bilk) and the Jew (Leach) bucked, not to mention the rumors that he was banging one of Billy’s girlfriends when Billy was away at school (prison),” he said. “That put things over the edge. At that point, he had no chance. He was the walking dead.”

During his last brush with the law in the 1980s for a drug-dealing case, Schultz admitted to being a confidential informant for the FBI for more than 30 years. Because of his close relationship with the Giacalones, according to FBI records, upon his release from prison in the 1990s, Schultz was given a “pass” for his misdeeds and allowed to retire to Florida without repercussions.

One former FBI agent familiar with Schultz’s cooperation says that despite all the information he provided, he always denied holding any knowledge  of the Leach and Hoffa hits.