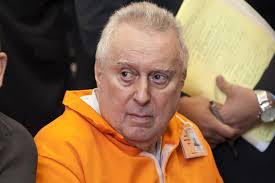 An admitted ex-girlfriend of Bonanno crime family underboss Nicholas (Nicky Mouth) Santora has unleashed a social media tirade against Chrysler for her belief that she got scammed in her recent purchase of a Jeep Wrangler, even reaching out to newly-enshrined Detroit mob Don Jack (Jackie the Kid) Giacalone for aid.

Using the Twitter handle Legalrebel2, she launched a Tweeting assault on Chrysler, Jeep and Chrysler CEO Sergio Marchionne last week, posting such barbs, “Screwing of a mob underboss who was the basis of a character in the movie Donnie Brasco out of 8 thousand dollars is really bad karma,” “I’m at this level, Jack Giacalone, yeah that Jack Giacalone knows all about my problems with his neighbor Sergio Marchionne” and “The Jeep Wrangler is a piece of junk, anybody who buys it will have it in the shop non-stop.”

The Chrysler Corporation, headquartered in Metro Detroit, has owned the Jeep brand since the late 1980s. Marchionne was named CEO of Chrysler six years ago. Marchionne has publically spoke on the Wrangler’s engine issues and promised to “make better cars.”

According to the legalrebel2 Twitter account, the Italian-Canadian Marchionne purchased a pair of million-dollar plus price-tagged lakefront properties in Commerce Township, the same westside Metro Detroit community where the 65-year old freshly-minted Godfather Giacalone resides.

Giacalone was appointed boss of the Detroit mafia last year by ailing longtime Motor City mob czar Giacomo (Black Jack) Tocco, who died of heart failure in July 2014 after serving more than three decades on the throne of the La Cosa Nostra kingdom in Michigan, per street and underworld sources.

Jackie the Kid is mob royalty himself – his dad was underboss Vito (Billy Jack) Giacalone and his uncle was legendary street boss Anthony (Tony Jack) Giacalone, deceased since 2012 and 2001, respectively.

Santora, 72, has been the reputed underboss of the Bonanno clan in New York on an official basis since 2007, acting since 2003, according to court records. In the late 1970s and early 1980s, Nicky Mouth, nicknamed for his gregarious and talkative ways, was a member of Dominick (Sonny Black) Napolitano’s crew in Brooklyn, which worked out of the Motion Lounge and was famously infiltrated by FBI undercover officer Joe Pistone (aka Donnie Brasco).

The federal government’s Operation Donnie Brasco yielded numerous busts and indictments, Napolitano’s assassination as a result and the 1997 film, starring Johnny Depp. Actor Bruno Kirby (Godfather Part II, When Harry Met Sally) portrayed a character based on Santora in the movie. Santota was jailed for more than 10 years on racketeering charges in the aftermath of Piston’s undercover work being revealed in the summer of 1981.

Nicky Mouth (sometimes called “Nicky Cigars” as well) was fingered, although never convicted, as being one of the participants in the notorious bloody May 1981 inter-family purge  referred to as “The Three Capos Murders,” when renegade Bonanno captains Alphonse (Sonny Red) Indelicato, Dominick (Big Trin) Trinchera and Philip (Phil Lucky) Giaccone were slaughtered in a private mob club-meeting spot located in Brooklyn known as the “20/20 Club” – a brutal triple homicide depicted in the Donnie Brasco movie.

Released from prison in 1992, Santora, assigned capo of Sonny Black’s crew following Sonny Black’s slaying, climbed the latter of the Bonanno Family under the regime of Joseph (Big Joey) Massino, until Massino himself flipped in the mid-2000s and Santora went down on another racketeering indictment and he had to serve another four years behind bars. He’s been free since 2009 and active in Family matters, helping imprisoned Don Michael (Mikey Nose) Mancuso and acting bosses Thomas (Tommy D) Di Fiore and Vincent (Vinnie TV) Badalamenti look after syndicate affairs on the street.

Prior to his promotion to Don last year in the moths before Jack Tocco passed away, Giacalone had been acting boss for two years. “Made” into the Detroit mafia in a February 1986 induction ceremony conducted by Tocco and his uncle Tony Jack, Jackie the Kid got upped to capo status in the early 1990s and street boss a decade later in the early 2000s after Tony Jack’s death from cancer in 2001. Indicted in a racketeering case in 2006, he beat the charges at a 2007 trial.

Featured image: Nicky Santora in federal court in New York in the mid-2000s