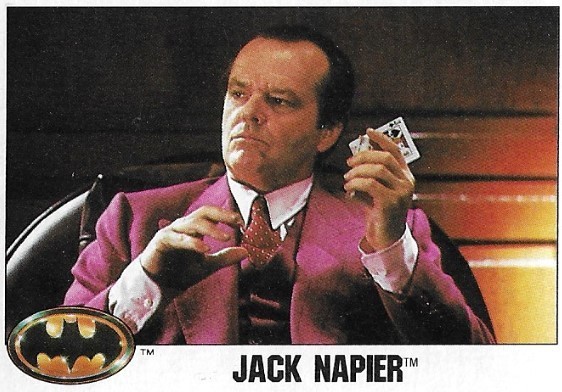 1 Jack (The Joker) Napier — Played by Jack Nicholson in the first Tim Burton-helmed Batman film in 1989, the slick, swaggering-wiseguy Napier character transforms into The Joker early in the movie and Nicholson delivers one of the best performances of his career.

2 Alphonse (Big Boy) Caprice — Played by Al Pacino in Warren Beatty’s 1990 Dick Tracy live-action blockbuster, Big Boy Caprice is an over-the-top character clearly inspired by real-life Chicago mob boss Alphonse (Scarface) Capone, who ruled during the Prohibition-era and made headlines around the globe. Pacino earned a Best Supporting Actor nod for his performance at the Oscars that year

3 Oswald (The Penguin) Cobblepot — Played by Danny DeVito in 1992’s Batman Returns and Colin Farrell’s in 2022’s The Batman, The Penguin is Gotham City’s cunning, disfigured, overweight “gentleman of crime.” He headquarters out of the Iceberg Lounge and uses his cane as a gun.

4 Carmine (The Roman) Falcone — Played by Tom Wilkinson in 2005’s Batman Begins and John Turturro in The Batman, Falcone’s “Roman Empire,” is Gotham City and the DCEU’s premier mafia organization.

5 Wilson (Kingpin) Fisk — Played by Michael Clarke Duncan in the 2003 film Daredevil and more famously by Vincent D’Onofrio in the Netflix Daredevil tv series and Hawkeye in the Disney+ series, Kingpin is the MCU’s most fearsome crime lord. His territory is New York City and he first appeared in comic-book character form in the late 1960s as a villain to Spiderman.