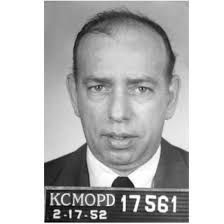 Kansas City’s Civella crime family wasn’t to be trifled with in its heyday. The boys from the Missouri mafia were unafraid of littering the streets with bodies and did so throughout much of the 1970s and early 1980s. The newly-premiered season of the FX television show Fargo explores a fictional storyline involving the K.C. Italian mob and its counterparts in the city’s Black mob during the 1950s.

July 15, 1970 — Civil Rights leader Leon Jordan is gunned down outside his Green Duck Tavern on a murder contract issued by the Civella crime family and carried out by the Kansas City Black mob. Jordan punched a Civella- politician and got into a spat with Black mob boss James (Doc) Dearborn over a woman.

July 22, 1976 – Kansas City mob soldier David Bonadonna is found dead in the trunk of his Mustang. Bonadonna was shot in the back of the head. He was feuding with Godfather Nick Civella and Civella’s street boss Willie (The Rat) Cammisano over control of the city’s River Quay nightlife district.

November 17, 1976 – Kansas City wiseguy John (Johnny B) Brocato is found shot to death and stuffed in the trunk of his car at the airport. Brocato was a Bonadonna loyalist.

February 19, 1977 – Kansas City mobster John (Johnny Green) Amaro is shot to death in his garage. Amaro was a Civella soldier.

February 22, 1977 – Kansas City mob associate Harold (Sonny) Bowen is shot-gunned to death inside a crowded Pat O’Brien’s bar in the heart of the River Quay district on the evening of Amaro’s wake. Bowen, a Bonadonna bodyguard and enforcer, is believed to have killed Amaro. Pat O’Brien’s would soon be leveled in a bombing.

August 5, 1977 – Kansas City mob associate Gary Parker is blown up in a car bomb in his driveway. Parker was a Bonadonna loyalist.

May 2, 1978 – Kansas City underworld figure Myron (Alley Cat Andy) Mancuso, a professional thief and Cammisano crew member, is shot to death behind the wheel of his car. Mancuso was last seen alive leaving a 24-hour diner with Willie the Rat’s son and protégé William (Little Willie) Cammisano, Jr., less than a hour befo

re being found dead.

May 4, 1978 – Kansas City underworld figure Michael (Minuteman Mike) Massey, Mancuso’s partner-in-crime in a high-end burglary ring, is shot to death behind the wheel of his car. Massey had been a part of a K.C. mob crew headed by Anthony (Tiger) Cardarella and was an FBI informant.

May 17, 1978 – Kansas City underworld figure Mike Spero, a rogue independent mobster who, along with his two brothers (Joe and Carl) teamed with David Bonadonna to take on the Civella syndicate, is slain in the infamous Virginian Tavern Massacre. The brazen attack staged at the Spero crew’s headquarters was allegedly ordered by Willie the Rat.

June 18, 1980 – Kansas City underworld figure Joe Spero, Mike’s brother who survived the Virginian Tavern Massacre, is killed in a bombing. He was allegedly tinkering with booby-trapped explosives in his work shed on his farm when they exploded.

January 6, 1984 – Kansas City underworld figure Carl Spero, Mike and Joe’s brother who was wheelchair-bound from the Virginian Tavern Massacre, is blown up at his Five-Star Investment Used Cars lot

February 9, 1984 – Kansas City mafia captain Anthony (Tiger) Cardarella, disappears after attending a meal with his wife and kids at a local restaurant and isn’t found until three weeks later, strangled to death in the trunk of his car in parking lot of freight company warehouse on February 27. Tiger Cardarella and his longtime partner-in-crime Felix (Little Phil) Ferina were plotting against Willie the Rat in the wake of Nick Civella’s passing of lung cancer in 1983.

January 14, 1985 — Kansas City Black mob boss James (Doc) Dearborn is gunned down outside a liquor store across the street from a hotel drug den he operated out of. Dearborn ran the city’s Purple Capsule Gang (PCG) for two decades and might have been in on Cardarella and Ferina’s plan to overthrow Willie the Rat.

August 18, 1988 — Kansas City mob associate Roger Reid is found strangled to death inside a hotel room. Reid was in a beef with his childhood pal Little Willie Cammisano over golf course gambling debts stemming from a trip to Las Vegas.

December 17, 1990 — Kansas City mob associate Larry Strada, who owned a suburban bar that a lot of made guys hung out at and testified in front of a grand jury related to a 1989 gambling bust of a Civella bookmaking operation, is shot to death outside his home in Gladstone, Missouri.

November 27, 1996 –– Kansas City mob bookie Harold Ash is gunned down outside his residence after leaving a riverboat casino with $4,000 in winnings.