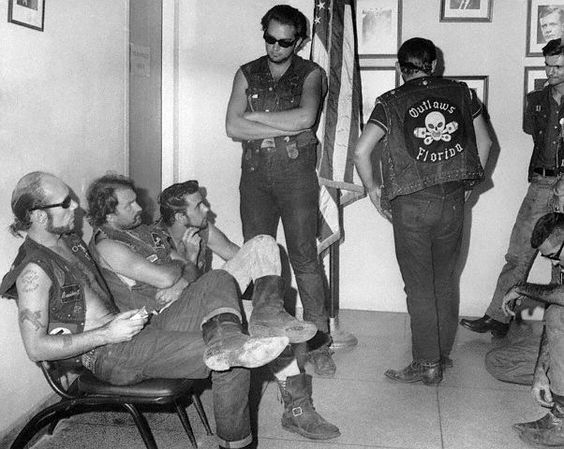 The infamous Outlaws Motorcycle Club first made national headlines 50 years ago with the barbaric crucifixion assault of a teenage girl in Juniper, Florida, foreshadowing the reckless debauchery the biker gang would become known for in future decades. Five Outlaws were arrested for nailing 19-year old Christine Deese to a tree at a park in the city’s Juno Beach neighborhood on November 14, 1967. The incident drew media attention around the country for its sheer brutality and the personal ire of Florida’s then-sitting Governor Claude Kirk.

The Outlaws had just landed in the Sunshine State the year before when the Chicago-founded club dispatched Donald (Deke) Tanner to Florida to plant a flag down south in a region that would soon grow to be a biker hotbed and key battleground state in the race for gangland cycle supremacy in North America. Tanner teamed with an area biker boss named James (Big Jim) Nolan, who led a local club called the Iron Cross, to start the Outlaws’ first chapter in Florida. Nolan, 74, was released from a 35-year stay in prison last fall.

Back in the summer of 1967, Tanner and Nolan got together and consolidated the Iron Crosses with three other local biker gangs, the Half Breeds, the Cossacks and the Outcasts into the South Florida Outlaws, setting up camp in several cottages clustered behind Kitty’s Saloon in Juno Beach, the new chapter’s main hangout in the early days. Christine Deese dated Florida Outlaw Norman (Spider) Risinger, one of Big Jim Nolan’s top enforcers. She upset Risinger by not giving him $10 he believed she owed him.

On the afternoon of November 14, 1967, Spider Risinger and four of his Outlaw brothers, Francis (Fat Frank) Link, Don (Mangy) Graves, Joe (Squirrel) Sorsby and John (Crazy Johnny) Wables kidnapped Deese from Kitty’s Saloon, beat her and then literally nailed her to a tree in the woods. After 15 minutes, they let her go, congratulating her for not screaming for help.

It wasn’t long before she did. Deese reported the incident to local police and arrest warrants were issued for Risinger, Link, Graves, Sorsby and Wables.

Like Risinger, Link was a Florida Outlaw. Mangy Graves, Squirrel Sorsby and Crazy Johnny Wables, on the other hand, were from the club’s Detroit chapter. Risinger and Link were arrested within days of the assault. The three Motown bikers went on the run for two weeks and were finally brought into custody in Michigan, found being hidden by the Renegades, an Outlaws affiliate club in Detroit.

Upon being extradited from Detroit to Florida, the trio of Motor City Outlaws were met at the Ft. Lauderdale airport by Governor Kirk, who in a face-to-face meeting in a cargo holding terminal personally vowed to boot the biker gang out of the state. Months prior, Kirk had kicked the Hells Angels out of Florida after the California-headquartered club attracted bad press in the area for the accidental killing of a young girl by an errant gunshot in the midst of a brawl at a Pompano Beach migrant campground.

Mangy Graves testified for the prosecution at the 1968 trial in exchange for probation. The charges against Crazy Johnny Wables were dropped before the case got to court. Everybody else was convicted and sentenced to prison terms – nobody did more than six years. Governor Kirk never successfully vanquished the Outlaws from Florida, but did succeed in shutting down Kitty’s Saloon, forcing the chapter to move to its current locale in West Palm Beach.

Spider Risinger was allegedly one of the triggermen in the shotgun massacre of three visiting Hells Angels from Massachusetts in 1974. The triple-murder occurred at a Broward County rock and gravel pit as revenge for the physical assault of a Florida Outlaw at a New Year’s Eve party in New York City months before and set off the now-epic biker war between the two clubs. Big Jim Nolan was put on trial three times for ordering the Hells Angels triple homicide, however at two mistrials, he was acquitted of all charges. Risinger went on the run for almost two decades until his capture in Indiana in 1991.